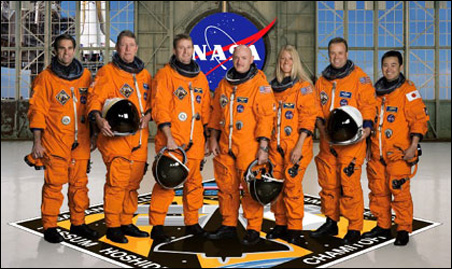 Saturday would not be a great day to look for someone in the northern Minnesota town of Henning.

A good share of the residents will be at Kennedy Space Center in Florida celebrating the moment when hometown hero, Karen Nyberg, blasts into space as an astronaut aboard the shuttle Discovery.

Nyberg, a graduate of Henning High School, has invited her former classmates and teachers as well as her extended family living in the region to join the launch festivities.

If you loved the Australian movie “The Dish” you might want to go to Henning sometime anyway.

In the film, an observatory located in a sheep pasture outside Parkes, New South Wales, Australia, was used to relay live television of astronaut Neil Armstrong’s “giant leap for mankind” during Apollo 11’s moon landing in 1969.

The charm of the somewhat fictionalized movie is the immense pride little Parkes takes in its role in the extraterrestrial drama.

Now, that sort of pride is aflame in Henning, population 816.

“You don’t often get a graduate who goes on to do these great things,” said Thomas Williams, the dean of students at Henning Public School where the K-12 enrollment is 360.

Pictures of Nyberg adorn school walls. A timeline in one hallway notes landmark dates in the history of space exploration. Images of space ships decorate classroom windows. A readathon in April focused on space themes as did the community’s “Great Henning Get Together” where kids experimented with Alka-Seltzer rockets.

People from all over town also scrawled tributes to Nyberg on a monster banner. To their delight, it’s enshrined in space history: NASA’s website features a photo of the banner held up by Nyberg and her fellow crew members on the STS-124 mission to the International Space Station.

Nyberg is a mission specialist on the seven-member STS-124 crew. They are scheduled to launch at 4:02 p.m. Central Daylight Time on Saturday.

The overall mission is to deliver and install components for the Japanese Pressurized Module known as the “Kibo” (hope) laboratory. Once completed, the lab will conduct astronomical observations and other studies. The upcoming mission is the second of three flights to ferry components for Kibo.

This mission will include two space walks to install the 37-foot, 32,000 pound Kibo lab and its remote manipulator system.

Nyberg is not scheduled to walk in space. Instead, she will become the first astronaut to operate three robotic arms in orbit. Using arms on the shuttle and the space station, she is to inspect the Discovery’s heat shield and help install and test the Kibo lab.

Her first voyage
The crew also is scheduled to rotate space station residents, leaving one astronaut, Greg Chamitoff, there and bringing home another, Garrett Reisman.

It is Nyberg’s first voyage into space since she was selected as an astronaut in 2000.

Astronauts are secluded from public comment at this point in their mission, so Nyberg wasn’t available for an interview. But it’s easy to find people in Henning to talk about her background. They portray a glowing picture of a student with typical Minnesota interests but outstanding drive.

Nyberg grew up near Henning in the hamlet of Vining (population 68), where her parents Phyllis and Kenneth Nyberg still live.

At Henning High school, “she was valedictorian of her class and just straight-A through everything,” said Ed Snyder, Nyberg’s former history teacher who also doubled as the school’s athletic director.

Beyond brilliance in academics, Nyberg excelled at track, basketball and volleyball, he said.

“She was hard-working, down to earth and likeable,” Johnson said.

Nyberg kept touch with her classmates over the years, and many of them are going to watch the launch, as are Snyder, Johnson and several other teachers.

For a video of her at work for NASA, see KSTP-TV’s website.