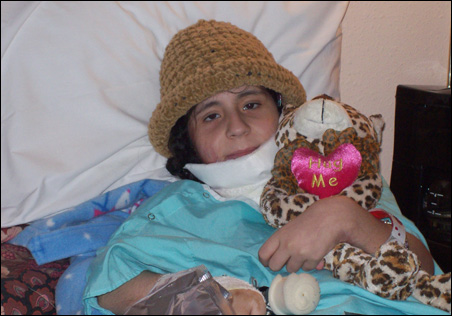 Courtesy of Craig Lambrecht
Asmaa, now 10, has come a long way since this day in the burn unit of Smith Gate.

Asmaa, a 10-year-old Iraqi girl, and Baumtrog, a Minneapolis firefighter and a member of the Minnesota National Guard, were reunited at the Mayo Clinic in Rochester last month. They were able to do simple things together, things that once had seemed impossible to imagine.

“I brushed her hair and put barrettes in it,” said Baumtrog, “and we painted our fingernails red.  Just girl things. We talked and smiled.”

Baumtrog and Asmaa first met in horrid circumstances three years ago. The child’s father had brought Asmaa, badly burned in a house fire, to a remote place called the Smith Gate Clinic outside the perimeter of a U.S. military outpost 60 miles south of Baghdad.

Burn clinic serves up to 50 children, desperate families
The clinic, which in fact was a one-room trailer, was the only burn clinic for children in Iraq. It was headed by Craig Lambrecht, a Bismarck physician and a colonel in the North Dakota National Guard, and staffed by medics from the Minnesota National Guard, including Baumtrog, a sergeant. On a daily basis, there were anywhere from five to 50 children and their desperate families waiting in the hot sun for help.

“The Iraqi people love Americans,” said Baumtrog. “They think we can do anything. But sometimes, their expectations aren’t realistic.”

There were too many days that children had to be turned away because of meager supplies at Smith Gate. So Lambrecht went about the business of arranging for more supplies by calling on the good will of the people of Minnesota and North Dakota. He set up a foundation at his employer back home in Bismarck, Medcenter One Health System. Donations of needed supplies and money poured in. (The foundation still functions. It can be reached here.)

Lambrecht, medical director at Medcenter One, husband, father of five, still finds time to help cut red tape so that the most needy patients from Smith Gate can get life-saving medical care in the United States.

To date, four Iraqi kids have been brought to the United States for medical treatment, thanks to Lambrecht’s persistence and a lot of good America will. 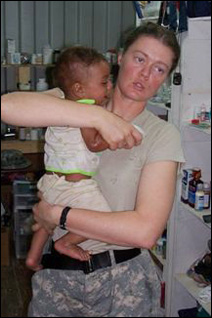 Asmaa and her father arrived in Minnesota earlier this month, getting a free lift from Northwest Airlines. The extensive surgeries she is receiving, at no cost, at Mayo Clinic slowly are giving her something resembling a full life.

Because it had taken six months before her father could get her to Smith Gate, the help Lambrecht and medics could give Asmaa three years ago was limited. Untreated, natural healing of burned skin scars and tightens.  The process had pulled down Asmaa’s lower lip, so she couldn’t speak and had difficulty eating.  Smiling was both physically and emotionally out of the question. The untreated healing of the burns  also had tightened the skin on her arms, so that her arm bones were pulled over her hands. Her body was so badly burned and scarred she couldn’t sit up.

Domestic fires one of the unintended consequences of war
It should be noted that the vast majority of children served by Smith Gate have not been direct victims of war. But domestic fires and the burns that come with them can be unintended consequences of war. A common cause of the fires is that many Iraqis are using open fires — fueled by kerosene — for cooking and heating because normal power sources are not available.

It also should be noted that the burn clinic was not the primary responsibility of either Lambrecht or the medics. Their first obligation was to the troops of the 1st Battalon, 125th Field Artillery Regiment, which usually is headquartered in New Ulm. Those troops were responsible for providing security to truck convoys passing on remote road to and from Baghdad.

But the children and their parents were an emotionally powerful constant. Any precious time off from regular duty saw most of the medics in the clinic.

No one, says Lambrecht, devoted more of her sweat and tears to the clinic than Baumtrog.

“The heart and soul of Smith Gate,” said Lambrecht.

Here’s a sample of the work done at Smith Gate Clinic.

Baumtrog brushes off that praise, saying that all of the medics poured themselves into the clinic work.  The “heart and soul” of the clinic, she said, were children like Asmaa and her father.

“If there are any heroes here, it is people like her father,” said Baumtrog. “The love he has for his daughter is beyond any words I have.”

The surgeons at Mayo also are doing “heroic” work, according to Baumtrog. Asmaa now can sit up. She has partial use of one hand, and her lower lip has been re-constructed so that she can speak, eat — and smile.

“Her lip makes her look like Angelina Jolie,” said Baumtrog.

Baumtrog has made two trips to Mayo since Asmaa’s arrival. At first, the child didn’t recognize Baumtrog in her civilian attire.

And that’s when Baumtrog almost cried.

“She’s so strong,” said Baumtrog. “She has a beautiful soul.”

They did those sweet, simple girl things, and on a second trip, Baumtrog and Asmaa even took a day trip, Asmaa’s first away from the hospital. They dined at a Mideast restaurant in Rochester. They stopped at a Barnes & Noble and moved on to an arcade, where Asmaa was able to use her one good hand to play games.

Dan Ford and Ryan Marti, other medics from the Guard, also have made the trip to Rochester.