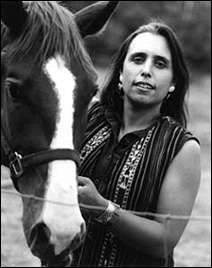 Oh, the things we learn too late in life.

Eight years after her go-around as Ralph Nader’s running mate at the top of the Green Party ticket, Winona LaDuke now knows what they could have done to win the White House.

All they needed, she says now, was an ice cream truck.

She learned the secret in the midst of what she calls “part of my mid-life crisis” a year ago.

“I bought a bio-fuel powered ice cream truck,” she said, laughing. “The kids on the reservation never had an ice-cream truck before.”

So, she bought the truck, a 1987 Chevy, with a big, pink ice cream cone on top, drove it to the White Earth, loaded it with organic treats and started driving through the villages on the reservation.

“You’re so loved when you drive the ice cream truck,” she said. “Children follow you, old people.  If Ralph and I had only known. …”

LaDuke twice ran as Nader’s running mate, both times without really planning to.

In 1996, a member of the Green Party asked LaDuke if it would be all right if her name were just placed on the list of potential running mates. LaDuke figured there could be no harm in that.

It was Nader, asking her to run.  She agreed. They got trounced, and she came back home to Minnesota. She never intended to run again.

And so she joined Nader again, this time in a race that some people will never forgive her for running. Recall, 2000 was the year that had just a few Nader votes gone to Al Gore, there never would have been a George W. Bush presidency.

Supports Obama
“Some people are still mad at me,” she said. “But I refuse to take responsibility for what happened. Those people who are still upset, I say, ‘Get over it.’ I believe that Ralph and I contributed to revitalizing our democracy.”

“He was personally hurt,” she said. “A lot of people don’t know this about Ralph, but he’s a family guy. Most of the people around him are members of his family. He expects immense loyalty. So he’s hurt if you don’t agree with him.”

“He’s bringing life to the democracy,” said LaDuke of Obama.

But she will say nothing bad about Nader, a man she both likes and admires.

“I think he’s brilliant,” she said. “And I think he’s right when he talks about who really runs the country.”

In fact, the old running mates got together two weeks ago in Santa Cruz, Calif. It just so happened that the two were speaking in the same town on the same night. Despite the fact that he’s been hurt by her presidential choices, the two remain friends.

LaDuke, 48, doesn’t miss being in the midst of presidential politics — perhaps because she’s exhaustingly busy.

“You can either sit there or make things happen,” she says of her life.

For the last few days, she’s been in Minneapolis, working on a couple of projects with Honor the Earth, the nonprofit she heads. She’s working on installing two solar panels on buildings in Little Earth in south Minneapolis. This is a demonstration project, helped along in part with a grant from the casino-rich Mdewakanton Sioux band of Shakopee. Typically, the poor and communities of color are the last to benefit from environmentally friendly programs, she said. She calls it a form of “eco-apartheid.”

Wednesday night, she also was host and speaker of a meal featuring wild rice and hominy from the White Earth reservation at the Common Roots café, a place that features organic and locally grown products. The meal, which included organic buffalo meat loaf mixed with wild rice, was marvelous.

Deal with Hugo Chavez
Before and after the meal, LaDuke spoke passionately of the need for people to understand the roots of their food sources, of the fight to keep industry from creating a genetically altered wild rice, of the evils of factory farms.

She also just completed another deal with Venezuela’s Hugo Chavez, who furnished $250,000 for the people of White Earth to install a wind turbine. The Mdewakanton Sioux also contributed to that project.

LaDuke and other native leaders from across the country have dealt frequently with Chavez, who has given Indians large discounts on heating oils. LaDuke rolls her eyes at those who question the patriotism of dealing with Chavez, noting that poor Indians can’t keep warm by wrapping themselves in the flag.

She also is managing to be a mother — she has three birth children and has raised a couple of other kids — and a grandmother.

And along the way, she fights nuclear power, massive potato farms near the rez that use all manner of sprays on their crops.

There’s still more. She writes. She teaches. She gardens. And most importantly, she drives an ice cream truck in places kids have never seen such a wondrous thing.

LaDuke and the lessons she learned with Nader