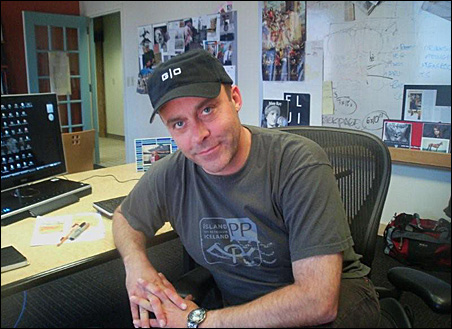 Courtesy of A/B Group One
Chris Birt wants to unlock the WBA team’s “inner Lynx” with a new marketing campaign.

Coincidentally, Birt’s firm’s headquarters — A|B Group One — are but a long jump shot across North Sixth Street from Target Center. So he’s perfectly located for the Minnesota Lynx, the WNBA women’s professional basketball team in town.

Birt makes noise. On the other hand, the Lynx, entering their 10th season, are “the best kept secret in the Twin Cities,” said their vice president of business development, Angela Taylor.

That’s not good to be talked about in hushed tones after a decade of trying hard to be noticed.

So, everyone from owner Glen Taylor to the ballgirl knew that the Lynx, who open their regular season Sunday at home against the Detroit Shock, needed an identity transplant, a brand infusion.

Birt is buzz personified. His favorite word du jour is “zeitgeist,” that German expression that means “the spirit of the time,” the overarching mood.

Out of Birt’s mouth, it means a product or brand’s “connection to the social spirit of the time.” It’s the vibe surrounding it.

How do you place this Lynx team — which has made the WNBA playoffs just twice in nine years and has a total team payroll of about $750,000 — into a social context that helps it to sell tickets and develop fans?

Lynx need something to break through crowded sports market
The Lynx, who claim to have averaged nearly 7,000 tickets sold last season, need lots of vibes to break through in this sports market that, in its media and tastes, tilts toward the established (men’s) teams, the much-loved University of Minnesota (women’s basketball) sports program and that prefers to be outside from May through August, rather than in a basketball arena.

Blunt Birt is no spin meister. The spin cycle is too namby-pamby for him. He’s the agitator-cycle guy.

This time, Birt — whose agency has worked for Byerly’s, the new Minneapolis central library, United Way, among others — has outdone himself.  Like teams do with male athletes, the Lynx are branding their players, particularly two-time WNBA all-star guard Seimone Augustus, who is a prime candidate to be on the U.S. Olympic team this summer in Beijing.

The key words on print ads, on TV spots and on the team’s Website include: “Primal Aggression . . . Passionate Basketball . . . The Animal Is Out.”

Augustus is positioned as sharing all those attributes: Her face is half her/half Lynx. She is roaring. “It looks like I was screaming,” Augustus said after a practice session earlier this week. “But I’m not. It’s actually a big yawn.”

No, it’s the sort of photo that makes you wake up. In some other displays to roll out — and in the first image that greets a visitor to the Lynx Web site — she is wearing makeup, a tank top — not a uniform — and her muscular body is clearly her temple.

In a bow to Michael Jordan, one TV commercial begins with the word, “Air” — a reference that male fans will instantly understand — and then it refers to Augustus as “Heir.”

And adds: “Who says basketball’s next superstar isn’t a woman?”

In an accompanying radio spot, two men debate whether it should be “heir” or “heiress.”

The voiceovers on the radio commercial are of African-American men, a target audience for the WNBA and Lynx.

Increasing male support seen as crucial
“The male is the gatekeeper to athletic events in the household,” Birt told MinnPost. “It’s as if they control the channel changer. One of the people we have to get past if women’s basketball is going to get somewhere is the male. And males respond to aggression.”

As for the images of Augustus looking more like a model than a hoopster, showing off her strong arms, her face nicely made up, her hair not sweaty after a game, Birt said: “We  are cluttered with basketball-players-playing-basketball images. Right away I saw this as a fashion exercise. I saw this as an exercise in style . . . There’s a difference between selling sex and sexiness. When you’re selling sex, you’re just selling something that’s carnal . . . Sexiness, on the other hand, relates to style . . . No one would deny that Audrey Hepburn was sexy, right? But you can say that in a wholesome way. She had that core quality. Now, these players have those same qualities . . . Simone is going to be a brand beyond how she plays because of the beautiful, earthy, organic style she exudes.”

Said Augustus of her role: “I think it’s good. A lot of times everyone puts on the feminine side of everything for us. We do have an aggressive side, a competitive side. I think both sides are expressed [in the ads].”

Another ad, in which Hillary Rodham Clinton makes a cameo appearance, has also been intermittently aired. Its key messages: “A woman in the White House. A man in the stands.” The man is a flat-out crazed, face-painted fanatic.

Lynx VP Taylor insists there’s no shift in the Lynx approach to marketing. She calls it “the ability to extend our brand . . . If we are a niche league, we have a better idea of who our fans are and we’re trying to broaden that fan base.”  She said families and single women will continue to be targets, too.

She went on: “Our players represent what is great about being a woman and having the opportunity to do what you love to do . . . That comes out in a lot of different ways. It may be interepreted by you or somebody else as selling the sensuousness. What we are trying to do is make our players recognizable.”

But here in Minnesota nothing seemed to work. According to official WNBA attendance figures, the Lynx peaked in their inaugural season — 1999 — averaging 10,494 fans per game. Since then, there have been dips, with last year’s attendance announced at 6,971 fans per game, 12th in the league out of 13 teams.

Tax documents, filed with the city of Minneapolis, which owns Target Center, and obtained by MinnPost.com, reveal a deeper problem: At most games, there were as many as 60 percent no-shows. The average in-arena attendance was typically fewer than 3,000 per game. One game last May enticed only 25 percent of the ticket buyers to show up.

“The No. 1 thing is to win more games,” said Lynx Chief Operating Officer Roger Griffith, who is investing about $500,000 in this year’s ad campaign, or nearly 50 percent of last year’s gross ticket revenues. “That’s the obvious thing.”

The team is also instituting some game-day promotions to encourage attendance, premium courtside seating and tie-ins with local hip-hop radio station B-96.

The ads aren’t the only energy coming out of the Lynx front office. The team is in the midst of “10 Days of May-hem,” during which it has been or will be making personal appearances, attending charity events, conducting Mall of America shindigs, singing at Twins games and emailing more news releases to reporters than a presidential campaign on Super Tuesday.

But buzz is swift. Buzz is ephemeral. The Lynx, after 10 years, need this season’s buzz to last.

Minnesota Lynx are pouncing on the public with an aggressive, edgy branding campaign