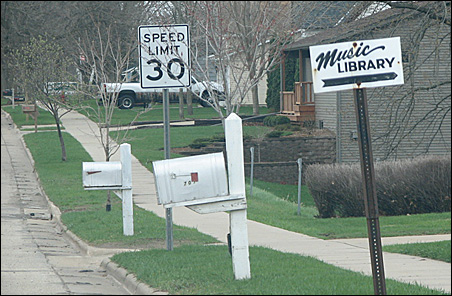 MinnPost photo by Joe Kimball
A low-key sign on Main Street is about all the town publicity leading visitors to the Chatfield Brass Band Music Lending Library.

Officially, it’s called the Chatfield Brass Band Music Lending Library, and it’s filled with ancient green and gray metal filing cabinets that hold reams of sheet music from the days when John Philip Sousa and his band entertained the nation with marches and town bands played concerts on summer evenings in parks throughout the country.

Piled high atop the museum’s file cabinets are hundreds of cardboard boxes filled with tens of thousands more pages of sheet music. That’s the new stuff, not yet filed or listed in the library’s online catalog.

Clearly, the Chatfield music library doesn’t aspire to grandiosity, but since the early 1970s, it’s quietly filled a niche, providing out-of-print music for bands that want to play some of that old-time, foot-tapping, hum-along music that’s made with trombones and tubas, with piccolos and saxophones.

But suddenly, thanks to a much publicized veto last month by Gov. Tim Pawlenty, the Chatfield music library has become the poster child for runaway legislative spending. His line-item vetoes of many items in the state bonding bill included one that eliminated $400,000 for the library.

And the folks here don’t understand why.

The governor, on his radio show after the veto, said: “Now, (a sheet music lending library) might be a nice idea, but is that a priority relative to zeroing out the Veterans Home? We’re going to have a sheet music museum, Rep. Tschumper? Is that the priorities for the state of Minnesota?”

Rep. Ken Tschumper of La Crescent represents the Chatfield area and is a first-term DFLer in a traditionally Republican district. He admits that he has been outspoken in his criticism of the governor’s anti-tax stance, which, he says, may or may not explain the governor’s response. 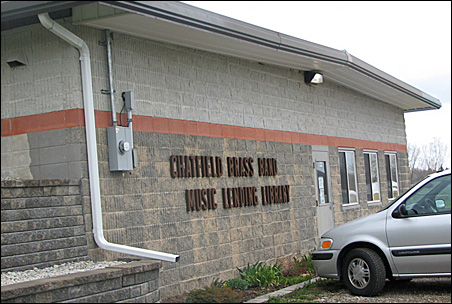 “People in my district are just shaking their heads, wondering, “What is the governor thinking?’ This museum is a pretty significant thing; what’s the value of the sheet music in there? Fifteen, 20, 25 million?,” Tschumper says.

“The governor approves $700 million in bonding projects but picks on this little gem in the rough. It would be humorous, if it wasn’t so pathetic,” he says. “It’s almost like something out of Lake Wobegon. And the people there are so modest. They’re frugal and weren’t even sure if they should ask for anything.”

Says Teresa Cerling, the library manager: “It doesn’t bother us so much that he vetoed it, but the way he picked on us, and said we didn’t have any merit. That’s what hurt.”

Getting there
Chatfield, with its population of about 2,500, is 20 miles southeast of Rochester on U.S. 52, a wide, modern highway until the last 11 miles, when it becomes a pitted and bouncy two-laner. Coming into town, visitors see banners on the street lights describing the town’s attributes: “Western Days Aug. 6-10”; “Family Farming, Business and Trade”; “Carnegie Library”; and “Trophy Class Hunting.”

But you have to keep going through downtown, past the stoplight (the only stoplight in Fillmore County, they say) and up to Seventh Street, where there’s a small sign pointing to the right: Music Library.

Then there’s a quick left, followed by a quick right (which you’ll probably miss and end up in a cul de sac). Then, head toward the creek, turn right — not left; that’s the sewer plant — and you’re in the gravel driveway.

It’s open three days a week, Mondays through Wednesdays, and you’ll find Cerling and one or two others in the front office section answering letters and e-mail inquiries on whether they’ve got oboe parts for an obscure Sousa march or the full brass section for George M. Cohan’s “Over There.”

The library gets hundreds of inquiries each year, from all over the world. There isn’t all that much drop-in traffic, but often scholars and researchers show up to go through the files.

And what a bunch of files. There are more than 30,000 pieces listed in their computerized database, which represents about 80 percent of what’s listed in the library’s card catalog. Then there are those 10,000 or so other, not-yet-filed pieces sitting in those boxes atop the file cabinets, sometimes stretching 10 feet high to the ceiling.

A small addition
A few years ago, folks from the Minnesota Historical Society visited and recommended that the library put up a wall between the offices and the file cabinets, and maybe invest in better air-conditioning and heating systems to keep the humidity constant and protect the paper sheet music, much of it more than 100 years old.

Library officials duly considered that suggestion and came up with a couple of options: either put up that wall and fix the heating and electrical systems for $100,000, or maybe add on, just a little, to the front of the building for about $200,000. 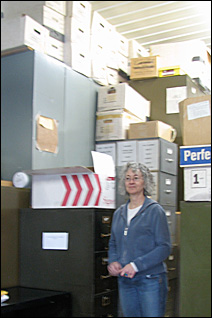 Their new legislator, Ken Tschumper, thought the expansion would be fine.

Then, a capital investment committee from the Legislature visited as part of its statewide tour to prepare the bonding bill.

“They were very impressed,” Cerling says.

So the improvement plan grew. Chatfield plans to build a new school on the edge of town and will tear down some of the old building on Main Street, right next to the park where the city’s Brass Band plays almost weekly during the summer. There’s plenty of room there to put up a new museum, city officials thought. The legislators agreed.

We’ve got trouble
The library dates to the revival of the Chatfield Brass Band in 1969 by Jim Perkins, a former Army colonel and local attorney with inexhaustible energy. And he played trombone.

After getting the band tuned up for performances in the local park and in area parades, he realized there was a shortage of usable music for the band. So, he sent letters to area band directors, asking them to send any extra music they might have, whether it be surplus or pieces that might no longer have all of the needed parts. Soon, the music began arriving in great quantities.

He kept it in his home at first, just a block or so off Main Street. When he ran out of room, the collection was moved to the basement of City Hall. It filled every available space there, including the bathrooms and shower stalls, says Pam Bluhm, who was one of the early museum assistants.

“The music would come in the mail, so we’d sort it out, getting it arranged by instrument: piccolo, flute, oboe, bassoon, clarinet, sax, trombone, trumpet, percussion. We’d catalog it by name, composer and arranger.

“Sometimes we’d get music that was wet, like from a flood. Vi, one of the older women working with us, would take it home and soak it in her bathtub, so the pieces stuck together would separate. Then she’d spread it all out to dry,” Bluhm says. “Jim used to say, if it’s in too bad of shape, throw it out. But Vi didn’t like to throw anything out.”

In 1980, Perkins donated some land for the new location. The utilitarian concrete warehouse was built, and it hasn’t changed much since.

Oom-pah-pah
Paul Maybery is a historical musicologist who worked at Macalester College for years and helps run national band festivals around the country. He moved to Chatfield three years ago, mostly to be close to the museum. He also plays tuba in the Chatfield Brass Band.

He knew founder Jim Perkins (who has since died) and describes him as a relentless, Type A kind of guy who motivates people to get things done. He wore a handlebar mustache, with one side that always drooped.

“On a Friday night, at 2 a.m., he’d call. He never figured anyone would be asleep at that hour, because he wasn’t,” Maybery recalls. “He’d say: ‘What are you doing? Hey, I need extra people to play in the band tomorrow. There’s a parade. We’ll meet at the museum, then drive over to the next town. You can stay overnight if you want.’ He had unbridled enthusiasm.

“Jim Perkins saw a need. He saw that town bands and university bands would from time to time need out-of-print music for their performances. If they relied on the music publishers, they’d be stuck with music dating back to only about 1950. Not much else is in print.”

Silver lining
All the publicity about the veto has brought extra attention to the town and galvanized the support of many. (But not everyone. The nice lady at the Cenex station — about four blocks from the museum — had no idea how to find it. And there have been online comments and letters to the editor in the region from people who think the state should take care of health care and roads before getting involved with sheet music lending libraries.)

Tschumper, though, says he’s decided to seek private support, from corporations and foundations, to fix up the museum. “I think we’ll find people who really appreciate the cultural and historical importance of the museum,” he says.

Tschumper notes that in the $925 million bonding bill passed by the Legislature (and cut to $700 million by the governor) there had been only $1 million in projects for his district. Although the music library was cut, the governor did approve the other $600,000, destined for the Houston County Historical Society and refurbishing of the Hokah City Hall.

Noting the outrage at the veto from even Republicans in the district, the DFLer sees one bright spot: “I wonder if the governor might have assured my re-election.”

Chatfield is located in the southeast corner of the state.