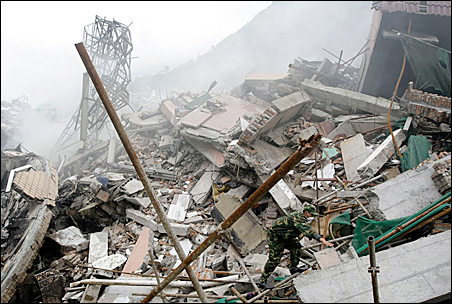 As international relief efforts stepped up to help not one but two historic disasters in Asia, Chinese soldiers and other aid workers pressed through mudslides, washed-out roads and debris on Wednesday to finally reach stricken areas isolated since Monday’s earthquake in Sichuan Province.

Struggling to focus on survivors trapped under collapsed buildings, they also are contending with destruction on a scale far beyond initial estimates, airlifting food and medicines by helicopter and sending in soldiers on foot.

“The soldiers who reached Wenchuan County, the epicenter of the 7.9-magnitude quake, began ferrying survivors across rivers on plastic skiffs,” the New York Times reported. “But in the first township that the soldiers reached, Yingxiu, only 2,300 of 10,000 residents could be confirmed alive, according to Xinhua, the state news agency. …

“The fact that aid was finally able to reach Wenchuan was a minor triumph in the aftermath of the worst earthquake to hit China in more than 30 years. Until Wednesday, Wenchuan had been completely cut off from the outside world. … Half of the survivors had severe injuries, Chinese officials said.”

The Times said “the deployment of a total of 100,000 members of security forces across the disaster zone, most from the People’s Liberation Army, is one of the largest peacetime mobilizations by any country in recent memory.”

” ‘Sichuan is so tremendously mountainous, it’s difficult to reach some of these areas even without an earthquake,’ said Kate Janis, a program director at Mercy Corps, an aid organization that is preparing to send food, medicine and other supplies to some of the hardest hit areas. ‘The roads are narrow and winding, and it’s hard to get anywhere.’ “

ABC News said “the ever increasing death toll now officially stands at 14,866, according to Xinhua, China’s state news agency. The vice governor of Sichuan province, the area worst hit by the quake, reported today that in his province 25,788 people were still buried. China’s news agency reported that more than 14,000 people are missing. …

“There are some people being saved, but the vast majority of those trapped under the buildings that gave way are dying. The buildings are becoming tombs.”

“Perhaps the most poignant experience came while we were talking to the local party secretary in Che Jia Va, who gave us directions and pointed out various landmarks — all the while keeping a stoic face,” Vouse reported.

“The town was once home to 13,000 people, and 3,000 are still missing, he says. As he shows me the damage to his community, I ask how many have died. Tears flow down his cheeks, and he makes no effort to wipe them away. He says that as many as 500 are dead, including his parents, his wife and their two children.

“In the midst of his anguish, there is a call over his radio. He’s needed again, and he runs off — with apologies — to go back to work.”

‘Extremely dangerous’ cracks seen in dams
Meanwhile, the official Xinhua News Agency said some 2,000 soldiers were sent to repair “extremely dangerous” cracks in the Zipingpu Dam upriver from the earthquake-hit city of Dujiangyan. According to the Associated Press, “The government said late Wednesday that experts had inspected the dam and declared it safe. …China’s top economic planning body said that the quake had damaged 391 mostly small dams.”

North of the Zipingpu Dam, the London Telegraph reported, “Tulong Dam, further north on the Min river, was said by officials to be near collapse, something which would have a knock-on effect on a series of dams and power stations further downstream.”

Russian aid reportedly reached affected areas on Wednesday, the Red Cross, Mercy Corps and other international organizations are assisting, and still other aid has been pledged or sent. Xinhua reported, for example, that “The International Olympic Committee (IOC) is to give seven million yuan (about one million US dollars) in relief aid to China’s earthquake-stricken areas.” Unlike Myanmar, whose response to last week’s cyclone has been universally criticized, China has considerable resources, including those of its large military, to apply to the relief and rebuilding effort.

For now, it is the newly discovered human struggle at the epicenter that draws fevered attention. Whole villages have been wiped out, severely injured survivors wait for help — and some hope remains for new discoveries of surviving victims under debris.

ABC wrote that of more than 2,000 students reported stuck beneath the rubble at some point, “Most of them are still missing. In a country where parents are only allowed to have one child, the earthquake has stolen part of an entire generation.”