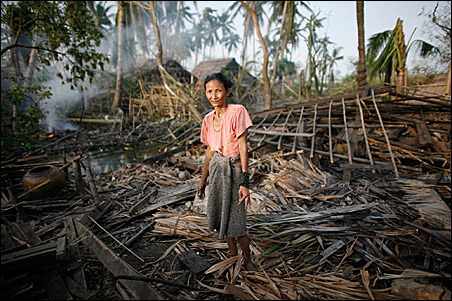 REUTERS
A woman sifts through the debris of her home destroyed by Cyclone Nargis near Kunyangon May 9.

In 1999, two airplanes flew repeatedly over Kosovo — in defiance of the Yugoslavian government and its threatening surface-to-air missiles — in order to drop food to ethnic Albanians who were trapped on the brink of starvation.

The organizers of that bold mission now watch from Minneapolis as world leaders debate whether it is time to defy the junta that controls Myanmar and impose a similar drop of desperately needed provisions for the victims of Cyclone Nargis.

There is precedence for foreign intervention when a humanitarian crisis reaches the proportions it has in Myanmar since the cyclone left more than a million Burmese without shelter, clean water and food, said J. Brian Atwood, who arranged for the Kosovo drops. At the time Atwood directed the U.S. Agency for International Development. Today he is dean of the Humphrey Institute of Public Affairs at the University of Minnesota.

But pulling off such a mission never is easy, Atwood said.

Our compelling moral obligation to help suffering people clashes with global politics and deeply ingrained respect for the rights of sovereignty. 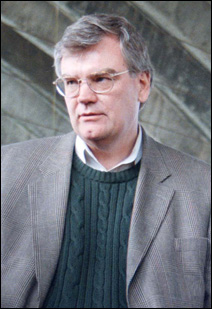 “Your instincts and your values are always present, but you have practical matters to consider,” Atwood said. “You can be faced with a terrible dilemma that you know people are going to be dying and you can’t do a lot about it.”

In Myanmar, where the military government is so paranoid it views foreign relief workers as hostile forces, negotiations have opened only a trickle of aid into the country.

Jan Egeland, the former U.N. emergency relief coordinator, expressed the frustration many around the world are voicing when he told Time Magazine last week: “A lot is at stake here. If we let them get away with murder we may set a very dangerous precedent.”

But the alternatives, Egeland said, are extremely risky: “You have to think it through — do you want to secure an area of the country by military force? What kinds of potential security risks would that create? I can’t imagine any humanitarian organization wanting to shoot their way in with food.”

Indeed, the aid organizations agonize over how forcefully to even argue for better access, said Hugh Parmer, president of the American Refugee Committee in Minneapolis. He worked with Atwood on the Kosovo air drop in 1999.

“If we act more forcefully, we may cut off the aid they already have,” Parmer said. “We don’t want to shut down this gradual opening.”

Never again?
After World War II, the world said “never again” would civilized people and nations stand by and allow slaughter comparable to the Jewish Holocaust.

The words “never again” echoed in the Twin Cities and around the world in the 1990s after the Hutu government in Rwanda slaughtered minority Tutsis.

The same words sounded again in this decade when ethnic Africans were attacked in Sudan’s Darfur region and driven from their villages.

The unfolding crisis in Myanmar differs substantially from the Holocaust and other catastrophic episodes of ethnic cleansing. It is a government denying life-saving aid to its own people, not an attack on an ethnic minority.

Yet, the crisis threatens to take on the proportions of those other tragedies in the sheer numbers of senseless deaths. And many people are striking some of the same moral arguments, reflected in summary by the famous words of Anglo-Irish statesman Edmund Burke: All that is necessary for the triumph of evil is for good men to do nothing.

But what to do?

In its article — with the provocative headline “Is it time to invade Burma?” — Time reports that some experts, including another former USAID director, Andrew Natsios, have called on the United States to unilaterally begin air drops to Burmese people regardless of what the junta says. The Bush administration has so far rejected the idea.

Parmer, of the American Refugee Committee, said it’s worth considering.

An American Refugee Committee team has waited for a week in Thailand for visas to enter Myanmar and help the cyclone victims. Emergency supplies the committee had assembled probably will be delivered by a partner organization, World Vision, which has gained some access, he said.

While the controlling junta has allowed some aid shipments and a few relief workers from countries it counts as friends, it has denied access to the worst-hit areas in the Irrawaddy Delta. And relief workers told the New York Times the humanitarian aid that was delivered had been stolen and warehoused by the country’s army.

Meanwhile, the French foreign minister, Bernard Kouchner, has called for the United Nations to invoke an agreement that could offer standing for countries to intervene collectively. The agreement, forged three years ago, holds that governments have a responsibility to protect their people from human rights abuse. Further, it says the international community must assume that responsibility if a government cannot or will not do so.

Any U.N. decision to invoke that “responsibility to protect” would require Security Council approval. And China and Russia almost surely would block it. But many are calling for world leaders to try anyway.

The United States and Britain should join the French government and introduce a resolution in the Security Council demanding that the Burmese government immediately allow the entry of international relief supplies and personnel into the country and allow the U.N. to take charge of the relief mission, Paul Stares of the Council on Foreign Relations and Ivo Daalder of the Brookings Institution said in an opinion article in the Boston Globe.

The resolution should hold open the possibility of additional measures — including air drops of relief supplies — if the government did not comply at once, they said.

The Kosovo example
How was it done in Kosovo?

In the spring of 1999, some 60,000 ethnic Albanians had fled their homes and hidden in the mountains as forces for then president Slobodan Milosevic hunted them down and NATO bombs rained on the countryside.

Their food was running dangerously low. And alarmed officials in Washington faced the prospect that Milosevic could accuse them of starving to death the very people the United States and NATO claimed to be rescuing.

Atwood, who then-President Bill Clinton had named as humanitarian coordinator for Kosovo, was called to a meeting in the Cabinet Room of the White House. 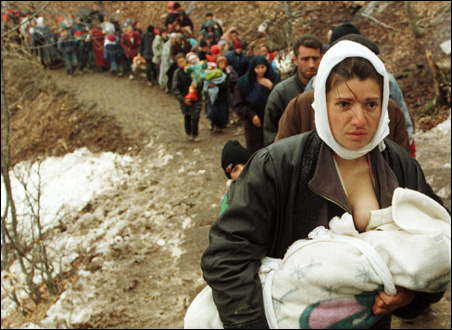 REUTERS/Damir Sagolj
An ethnic Albanian woman feeds her baby as she and another 2,000 refugees walk to Macedonia, March 30, 1999.

Could military forces repeat what had been done earlier in Bosnia and drop food from planes? Too risky, said the military experts in the room. Milosevic’s surface-to-air missiles could shoot down the planes.

Atwood volunteered to get it done, with the help of Parmer who at the time was USAID’s assistant administrator for humanitarian relief.

They chartered two Soviet-made planes from Moldova and hired Moldovan pilots who were willing to fly over Kosovo.

At a U.S. air base in Italy, bright yellow stripes were painted on the undersides of the planes to signify that they were doing humanitarian work.

The Yugoslav government was notified of their specific flight plans and told it would be an international humanitarian mission. The response given through the BBC and other news organizations was that Belgrade would consider the flights a hostile act.

Meanwhile, Atwood and Parmer worked with NATO commanders to secure a safe corridor where the planes could fly without being bombed by their own side.

For a week until the war ended and a few days beyond that, the sky over Kosovo rained 2,000-calorie packets of food. Belgrade initially responded with a spatter of resistance from the ground, but it subsided quickly, Parmer said.

In all, more than 10 tons of food were dropped.

Time is running out
A similar drop over Myanmar’s hardest hit areas would be feasible, Parmer said, although it is not an efficient way to deliver food. A dangerous difference in Myanmar is that the junta could send planes to fight what it would see as an invasion of its air space. The Yugoslav air force had largely been grounded by NATO fire, he said.

With few alternatives almost two weeks past the cyclone’s strike, time is running out, he said.

“I have no doubt that people have already died because of their reluctance to allow in Western aid,” he said. “Two weeks is the point at which you begin to lose people to malnutrition.”

Atwood and Parmer still express pride and satisfaction over their Kosovo mission. But they are cautious about prospects for repeating it, despite what many see as a moral imperative to help the Burmese people.

“There usually is a solution,” Parmer said. “But governments are reluctant to apply forces in these circumstances despite all of our good intentions.”

Meanwhile, the world stands waiting for the body count once again.

Should the U.S. intervene in Myanmar?