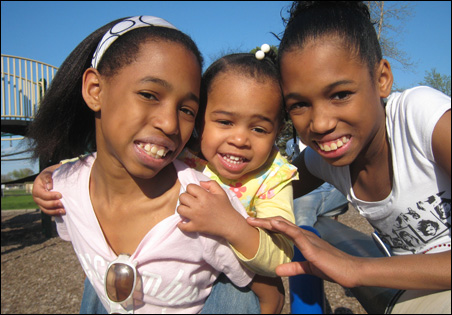 MinnPost photo by Roxane Battle
Olivia, Quinnlyn and Madison Tate enjoy an outing to the park.

For parents Yalonda and Gary Tate of Brooklyn Park, normal is anything but.

“Because we have three girls at three different stages in their life — a teenager, preteen and a toddler — and that’s hectic enough without all the other issues,” says Yalonda.

Their parents say14-year-old Madison is the tomboy of the family; she likes karate and spends lots of time creating Japanese artwork. Her younger sister, 10-year-old Olivia, is enrolled in dance and is more of what her mother describes a girly girl. The youngest daughter, 2-year-old Quinnlyn, is an energetic toddler who is rarely without a smile.

On a typical day, Yalonda, 37, gets Madison and Olivia off to school in the morning, after she has worked the night shift at Mercy Hospital in Coon Rapids as a labor and delivery nurse. Baby Quinnlyn attends Montessori school three days a week.

Regular trips to the hospital
Then there are the trips to Fairview Children’s Hospital two to three times a month for follow-up appointments and blood transfusions because both Madison and Olivia have sickle cell anemia, a potentially life-threatening genetic disease found primarily in people of color. The only potential cure is a bone-marrow transplant.

After suffering several strokes caused by the disease, Madison had a bone-marrow transplant in 2004, which failed. That’s when doctors told the Tates the only hope for Madison was a sibling bone-marrow match. Her sister Olivia was ruled out because she was sick, too. Their only recourse: Have another baby.

The Tates underwent in vitro fertilization, and tested more than 20 of Yalonda’s eggs before they found one free of the sickle cell trait. Baby sister Quinnlyn was born in November of 2005; six months later, stored stems cells from her umbilical cord were used to save Madison’s life.

Getting Quinnlyn here proved to be anything but normal from beginning to end. An induced labor left Yalonda in intensive care for three days and unable to have any more children.

Madison is now considered to be in remission, but the Tate family saga is far from over. Olivia’s condition has since progressed to the point where she, too, needs a bone-marrow transplant. The Tates turned to the National Marrow Donor registry with the hopes of finding a donor, knowing that the odds were against them. Most of the people in this country who have sickle cell anemia are, like the Tates, African-American, but according to the National Marrow Donor Program, only 2 out of every 10 African-Americans who search the national bone marrow registry for a donor actually find a match.

This time, however, luck was on their side. After just one month on the national registry, not one but two donors were found for Olivia, one of them a perfect match. The Tates were amazed at their good fortune.

“We were told that there is apparently a grouping of people out there that match our DNA,” said Gary.

Olivia is scheduled for her transplant this July at the University of Minnesota.

“It’s kind of old hat now,” said Yalonda. “Transplant number three. Just tell us where to be and when to be there.”

A need for donors
In the meantime, the National Marrow Donor Program is hoping to sign up 46,000 new donors as part of its national awareness campaign, which runs through May 19. The registration fee is normally $52, but during the campaign, new donors can sign up for free online. The initial registration process basically involves swabbing the inside of your cheek with a giant Q-tip provided in a mail-in registration kit.

Representatives from the National Marrow Donor Program gave away flowers at the Farmers Market on Nicollet Mall Thursday to kick off the recruitment drive, which has a special emphasis on finding more African-American and Hispanic donors.

Donors like those who gave the Tates another chance at being normal.

“It’s always been something,” said Gary. “We just always get through it.”

Sisters demonstrate benefits of, and need for, marrow donations