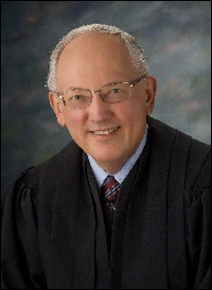 A Minnesota Supreme Court justice was waxing eloquently the other day, while sitting in a finely appointed office in the State Judicial Building, but he wasn’t discussing red-light cameras or concealed guns in a church parking lot.

This judge was telling about his service in the Civil War and his days fighting Indians and being mayor of St. Cloud.

It was Justice Paul Anderson pretending to be Justice Loren Collins, who served on the bench from 1887 to 1904. Anderson was practicing for appearances this month, when he’ll dress up as Collins and speak, in character, to visitors about life in Minnesota 100 years ago.

His performance is part of the Minnesota Sesquicentennial celebration. He’ll be at the Capitol May 11, and May 17 and 18, along with other historical reenactments and exhibits.

Anderson, a history buff whose mother wrote the definitive history of Eden Prairie, can identify with Collins; both families have Eden Prairie roots, as well as members serving on the state’s high court.

Anderson has the memoir Collins wrote — it was published by his family after his death. Using the factual information from Collins life, along with his own grasp of the state’s early history, Anderson can extemporize on most subjects from that era.

Collins ran for governor in 1904 (no word on whether Anderson plans to follow in those footsteps, too) but was soundly defeated.

After Collins’ death in 1912, his fellow judges honored him at a Supreme Court session, and the memorial noted: “In his unmerited defeat [in the governor’s race], the state of Minnesota sustained a loss from which she has not yet recovered.”

This weekend marks one of St. Paul’s biggest parties: Cinco de Mayo, which kicks off today: Because the Mexican national holiday is best celebrated on Friday and Saturday, we’ll be partying on the West Side on Dos de Mayo and Tres de Mayo.

And I’m worried that it will be Soggy de Mayo.

Doesn’t matter, said Brian Gioielli, marketing director for the Riverview Economic Development Association. “It goes off rain or shine. And we’ve seen a few different weather forecasts, so I think we’ll be all right.”
Saturday’s parade is the biggest event: It starts at 10 a.m. at Plato and Wabasha, just across the bridge from downtown St. Paul. It proceeds west along Cesar Chavez Street.

It rained a little last year, but everything went off just fine, Gioielli said. “This is our 26th year, so we’ve seen everything from perfect weather to snow to rain. And every year it just gets better.”

With up to 100,000 people expected over the two-day event, St. Paul’s festivities are the largest Hispanic/Latino event in the state, and one of the top 10 Cinco de Mayo celebrations in the country, he said.

Of course, people of all cultures show up for the lively music, dancing, food and atmosphere.

Music on three stages begins at 4 p.m. today, and the festival continues from 1 to 6 p.m. Saturday.

Check here for more information and the listing of musical performers.