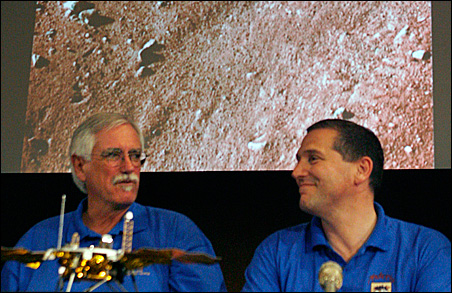 For most of us, Memorial Day weekend offers time off — time to remember and honor the war dead, and to open the cabin, or maybe head to the park for grilling, chatting and watching the kids play. For scientists and technicians working on the Phoenix Mars Mission, however, the weekend delivered high anxiety — soon followed by whoops of joy and great expectations for discoveries ahead.

After a 10-month journey, the unmanned Phoenix Mars Mission was ready to focus scientific inquiry on the planet’s cold northern plains, where the Mars Odyssey Orbiter found subsurface water-ice in 2002. During this year’s mission, a robotic “arm” will dig deep into the subsurface to collect samples for analysis. The goal is to see whether microbial life could once have flourished there.

But first the spacecraft had to land safely, and that was no certainty.

According to the Washington Post, Phoenix “was assembled largely from parts manufactured for other spacecraft. After two Mars mission failures in 1999, the space agency scrapped a landing mission planned for 2000 and recycled some of the hardware. One of those failures was the last time NASA tried a soft landing on Mars. The Mars Polar Lander was angling for the south pole when it prematurely shut off its engine and crashed to the surface below. The other failure involved a spacecraft that was supposed to go into orbit around Mars; NASA lost contact with it during the approach, and its fate is unknown.”

Hence the high anxiety on Sunday, when scientists at the University of Arizona Lunar and Planetary Laboratory, NASA’s lead institution for the mission, and their colleagues at the Jet Propulsion Laboratory sweated the upcoming landing.

“In all,” said the Post, “six of 11 similar attempts by the United States, Russia and England ended in failure, so the Phoenix team awaited with enormous apprehension the outcome of the spacecraft’s approach and landing.”

‘No one says a word’
Time magazine described the scene: “Because of the spacecraft’s risk-filled landing, it could have easily been a nightmare. …  Sitting in the mission control room during the final moments of the descent is like riding the bench during a baseball no-hitter: no one wants to jinx the outcome, so no one says a word.”

” ‘Seven minutes of terror’ is how [lead scientist Peter] Smith described the communications blackout as the spacecraft passed through the Martian atmosphere. One flight technician fidgeted with his pen. A few others rocked back and forth in their chairs, tension lines webbing their faces.

“Then came a simple radio burst, indicating Phoenix had reached its destination. Said Michael Wright, who helped design Phoenix’s protective heat shield: ‘Once I heard that ping, everything was OK.’ “

The touchdown occurred at about 7 p.m. Central time. At the Jet Propulsion Laboratory, Barry Goldstein, Phoenix project manager, said, “In my dreams it couldn’t have gone as perfectly.” According to the Guardian of London, “Jubilant mission controllers described landing the £212m probe as like scoring a hole in one at golf if you ‘tee off in Washington and the hole is in Sydney — and moving.’ “

Photos of a nearly featureless plain
Then came the pictures. “Less than two hours after landing, the NASA spacecraft beamed back four dozen black and white images, including one of its foot sitting on Martian soil amid tiny rocks,” the Guardian said. “Although images of the landing site, a nearly featureless plain marked by polygon-shaped cracks, may not dazzle jaded space buffs, scientists are thrilled,” Time reported.

” ‘I know it looks like a parking lot,’ said principal investigator Peter Smith, ‘but there’s ice under that surface. This is a scientist’s dream.'”

After some reconnoitering during its first week on Mars, the Phoenix will get down to business. The Post explained that “Unlike the two rovers that have been exploring the Martian surface for nearly five years, Phoenix is built to stay in one place and use its robotic arm to dig into the soil and ice. The vehicle is equipped with several miniature chemistry labs to analyze the material it digs up.”

According to Time, “The scoop, edged with prong-like ‘ripper tines,’ is designed to crunch into the tough polar permafrost. NASA’s plan is to dig trenches about 19 in. (.5 m) into the surface, a depth where scientists believe ice meets soil, and haul a sample onto the spacecraft. There, an instrument will heat the soil in tiny ovens, checking the resulting vapors for water and carbon compounds. An on-board chemistry lab with dual microscopes will add water to the sample and analyze the spectral and electrochemical results to check acidity, salt levels, and ion concentrations.”

Dramatic climate change in arctic
According to Henry Bortman of Astrobiology Magazine, the Phoenix mission is different in several ways from NASA’s previous landed Mars explorations. “But what most distinguishes Phoenix from previous Mars missions are its destination and the science investigations it will conduct. The Phoenix landing site is in the planet’s arctic north, in a region where orbiting spacecraft have detected water ice just inches beneath the surface. Previous landers have all explored Mars’s equatorial region.”

“Mars’s polar regions undergo dramatic climate change,” Bortman continued, “alternately warming and cooling, because of changes in the planet’s orbit that occur in cycles lasting tens of thousands of years. It’s possible that during a recent warming phase, water that is now locked up in frozen, buried ice temporarily became liquid. If it did, it would have left behind telltale chemical signs that Phoenix will be able to detect.

“Phoenix will not be looking for liquid water per se, Smith said, ‘because we think it’s too cold now. We’re looking at the changes in the soil caused by the liquid,’ changes that may have occurred during a previous warm period in the Martian northern plains. Phoenix will also look for organic molecules in the soil and ice it scoops up with its robotic arm. …”

Smith told Bortman: “We think organics must exist at Mars, because they’re brought in by asteroids and comets that have clearly impacted the planet over its history. And so what happened to those organics, and are they preserved in this region?”

A particularly suitable time and place
The Phoenix Mission website, at the University of Arizona, explains additional reasons for the arctic region’s suitability right now:

“First, Phoenix will land during the retreat of the Martian northern polar cap, when soil is first exposed to sunlight after a long winter. The interaction between the ground surface and the Martian atmosphere that occurs at this time is critical to understanding Mars’ climate history.

“Second, since the sun never sets during the Martian polar summer, Phoenix can take advantage of maximum sunlight, which is essential to the two solar panels that Phoenix will deploy as an energy source for the robotic arm and other instruments. Sunlight is also important for keeping batteries warm, which will store electrical power.

“Lastly, the ice-rich soil in the Martian polar regions may be the only place on Mars where microbial life can survive, and sampling in this region could provide researchers with insight into the planet’s habitability.”

So now, with the spacecraft safely ensconced, we can all watch as the experiments unfold. NASA describes the Phoenix project as aptly named. “Like the Phoenix bird of ancient mythology, the Phoenix Mars Mission is reborn out of fire; this new mission was created from the embers of previous Mars endeavors,” the agency ways on its website. “Scientists and engineers are confident that Phoenix will rise from the ashes revealing clues in the Martian arctic soil about the history of water and potential for biology.”