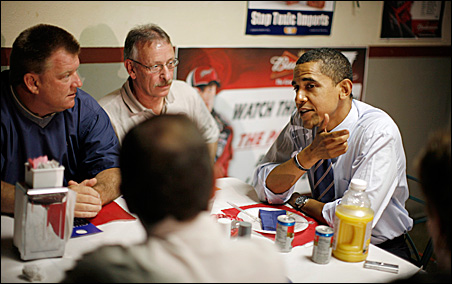 The true test is not whether Obama defeats Sen. Hillary Rodham Clinton in one or both states. It is the vote he collects from working-class whites — signaling whether they are satisfied with Obama’s denunciation of Rev. Jeremiah Wright Jr.’s provocative rants.

Democratic voters nationwide can appreciate the burden their counterparts in North Carolina and Indiana carry to the polls this week. The Wright debacle tore open a racial divide that many had strived to close.

It would be naïve to assume that every Democrat cares about the divide. Long after southern Democrats abandoned the party in response to President Lyndon B. Johnson’s 1964 civil-rights legislation, a significant segment of the party resists full racial reconciliation, the New York Times reported.

An echo of Johnson-era concerns
“In an echo of the concerns that roiled Democrats in Mr. Johnson’s era, one in five Democratic primary voters in Pennsylvania said race was an important factor in their choice,” the Times said. “Among those voters, Mrs. Clinton drew 59 percent.”

Erasing bias is not a simple matter even for those who sincerely want it scrubbed away.

Is it possible to reject Wright’s call for god to damn America and still rest easy that your response is not rooted in some inner prejudice? Can you be certain you aren’t unconsciously tainted by racism if you doubt Obama’s claim that during more than two decades of attending Wright’s church, the Trinity United Church of Christ in Chicago, he hadn’t heard anything akin to the offensive roar Wright sounded in recent televised appearances?

Recent research into implicit bias shows that the answers are immensely complicated.

Parallel questions about gender bias
And Clinton’s historic bid to be the nation’s first woman president has increased the difficulty by several degrees. It triggers parallel questions about gender bias. And it sets off a debate over whether the heaviest burden rides on the back of the first African-American or the first woman to have a chance of sitting in the Oval Office.

All of us hold unconscious clichéd beliefs, not only about blacks and whites, but also about men and women and other social categories, Scientific American said in an article entitled “Buried Prejudice: The Bigot in Your Brain.”

Seen one way, the human brain’s tendency to categorize people and other elements of life is useful.

“To make sense of the world around us, we put things into groups and remember relations between objects and actions or adjectives: for instance, people automatically note that cars move fast, cookies taste sweet and mosquitoes bite,” the article said. “Without such deductions, we would have a lot more trouble navigating our environment.”

Associations vs. values
The problem begins with associations that contradict our intentions and values. Many people unwittingly associate “female” with “weak,” “Arab” with “terrorist,” or “black” with “criminal,” even though such stereotypes undermine cherished values of fairness and equality.

Psychologists at Ohio State University provided one of many examples in a 2004 study when they measured white people’s brain activity as they viewed a series of white and black faces.

“The team found that black faces — as compared with white faces — that they flashed for only 30 milliseconds (too quickly for participants to notice them) triggered greater activity in the amygdala, a brain area associated with vigilance and sometimes fear,” the article said.  (The University of Chicago offers a psychological test of such implicit bias.

Cultural stereotypes are so robust that our brains make implicit associations automatically with little or no conscious thought. At the polls, they can act as a hidden force to sway a vote.

While the stereotypes differ, a similar psychological dynamic plays into Clinton’s candidacy.

It would be inaccurate and incendiary to equate women’s lack of rights with those of enslaved blacks. Former Vermont Governor Madeleine Kunin wrote in the Boston Globe.

Yet, there are parallels. Married women were long considered the property of their husbands. They had no right to their own money, to real estate or to vote.

“Both marginalized groups have experienced centuries of struggle to achieve full citizenship, a struggle that is far from over,” Kunin wrote.

In some ways, racism may be easier for a candidate to override than sexism, Nicholas Kristoff wrote in the New York Times.

“The challenge for women competing in politics or business is less misogyny than unconscious sexism: Americans don’t hate women, but they do frequently stereotype them as warm and friendly, creating a mismatch with the stereotype we hold of leaders as tough and strong,” he wrote. “So voters (women as well as men, though a bit less so) may feel that a female candidate is not the right person for the job because of biases they’re not even aware of.”

Women viewed as tough and strong also are typically perceived as cold and unfeminine. It’s a struggle to see them as both nice and competent, Kristoff wrote.

Such is the mental baggage voters take to the polls on Tuesday along with their other preferences in the Obama-Clinton tradeoff.

In Indiana, polls show a tight race to the finish. The state neighbors Obama’s home turf in Illinois, and it represents an important concentration of the white, working class Democrats that Obama has yet to show he can win.

A loss to Clinton there would finish Obama’s last hopes for wrapping up the nomination before the primaries end in June.

Meanwhile, soul-searching over bias will persist.

“Obama and Clinton are both contesting for the Democratic nomination for the presidency because of two revolutions that occurred before and during their lifetimes — the civil rights movement and the women’s movement,” Kunin wrote. “It is time to recognize the battle scars, celebrate the achievements and realize that the promise of a society of equal opportunity and justice for all has not yet been achieved.”

Tuesday’s elections will gauge extent of Wright damage to Obama