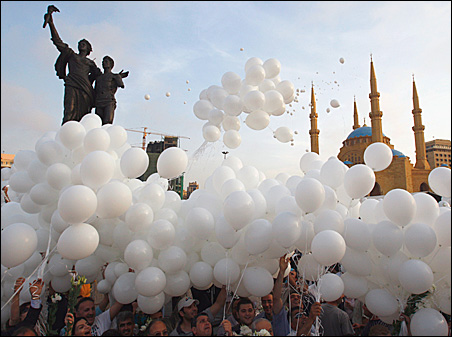 Diplomats are shuttling, and deals are being cut. But this week’s Mideast news isn’t about successes from President Bush’s just-completed trip, nor does it arise from U.S. leadership in the region. American officials instead find themselves on the sidelines today, reacting.

As Robin Wright observed in today’s Washington Post, “Just days after President Bush returned from the Middle East, the Middle East is moving beyond the Bush administration.

“Two major peace efforts — a surprise announcement of indirect talks between Israel and Syria brokered by Turkey and an eleventh-hour deal to prevent a new Lebanese war brokered by Qatar — were launched without an American role, and both counter U.S. strategy in the region.

Wright pointed out that the Bush administration has for years “resisted overtures from Jerusalem and Damascus to participate in revived peace efforts over the Golan Heights.” Turkey stepped up instead.

U.S. urged government to resist
And for the past 18 months, she wrote, “the United States has also urged the government of Lebanese Prime Minister Fouad Siniora to resist a new political arrangement that would reflect the shifting balance of power on the ground.”

But “to prevent a new war, Qatar stepped in to mediate. The peace deal struck yesterday favors Hezbollah, the powerful Shiite political party and militia armed by Iran and Syria, which will gain enough new cabinet seats to veto any decision.”

According to the Los Angeles Times, the Israel-Syria discussions’ roots go back at least a year.

“In February 2007, Israeli Prime Minister Ehud Olmert and his Turkish counterpart, Recep Tayyip Erdogan, met privately for more than two hours in Turkey,” the Times reported. “The two leaders concluded that the time was ripe for Turkey to mediate indirect peace negotiations between longtime enemies Israel and Syria.”

On Wednesday, everyone involved acknowledged the talks. “Syrian President Bashar Assad disclosed the negotiations last month, saying Turkish mediators had informed him that Israel was willing to return the disputed Golan Heights to Syria,” the Times said.

“Israel declined to confirm the talks at the time, but an Israeli official said Wednesday’s coordinated statements out of Jerusalem, Damascus and Ankara were a sign that ‘the discussions had advanced’ to a more serious level.”

Skepticism seen in Israel
Now comes speculation about chances of their success. According to the Los Angeles Times, “Reaction in Israel was largely skeptical, in part because of the announcement’s timing. Olmert is scheduled to be questioned Friday for a second time as part of an accelerating investigation into cash payments he received from Jewish American businessman Morris Talansky. Meanwhile, U.S.-backed peace talks with the Palestinian Authority have yielded no public signs of progress, with Palestinian officials sounding increasingly pessimistic.”

Ethan Bronner of the International Herald Tribune wrote, in a similar vein, “Olmert is politically weak, with a thin parliamentary majority partly dependent on the right-wing religious Shas party. He faces a criminal investigation that many Israelis believe should lead him to step down or refrain from undertaking negotiations with the country’s enemies. Moreover, twice before, under Prime Ministers Yitzhak Rabin and Ehud Barak, similar efforts to sign a deal with Syria failed.”

“In Israel,” Bronner added, “two-thirds of the public oppose a return of the Golan Heights to Syria, according to numerous opinion polls, and many strategists and generals have said that giving up the strategic advantage of the Heights in exchange for promises or even written treaties makes no sense. … On the other hand, many other Israeli officials and analysts see great benefits for Israel. Syria is a prime sponsor of Hezbollah and provides it with rockets and arms. Hamas and Islamic Jihad have headquarters in Damascus, and Israel will seek, in these negotiations, to have them closed.”

For Lebanon, a new government
In Lebanon, the New York Times’ Robert F. Worth and Nada Bakri reported, “The agreement specifies a new government and a new election law, ending an 18-month opposition sit-in that had suffocated business in Beirut’s downtown commercial center. It also calls for the election of the army chief, Gen. Michel Suleiman, as president. The post has been vacant since November.”

The Times report said, “Government leaders said they had given way on major provisions because they felt the alternative to an agreement was war. They also said they won a pledge that no faction would use its weapons internally, as Hezbollah and its allies did during street battles this month in the worst internal fighting since Lebanon’s 15-year civil war.

” ‘We avoided civil war,’ said Walid Jumblatt, a leader of the governing coalition. He added that the agreement called for a future dialogue on weapons, a clause that he and other government leaders hoped would eventually allow them to raise the issue of Hezbollah’s arsenal.”

However, “the deal leaves unresolved the questions that provoked the crisis in December 2006,” the Times said. “Those include Hezbollah’s weapons and Lebanon’s relations with Syria, which ended its 29-year military presence here in 2005 after the assassination of former Prime Minister Rafik Hariri.

“The divisive issue of cooperation with a United Nations tribunal to investigate Mr. Hariri’s murder and 10 other killings that followed also remains to be solved. Pro-government officials accuse Syria of involvement in those assassinations.”

Still, the United States termed the deal a good step – though as did Wright, the Times noted that “in the past, the United States has urged the government majority to take a firm stand in its conflict with the Hezbollah-led opposition.”

Waning influence
On the United States’ lack of a role in all this, the Washington Post’s Wright quoted experts including Marina Ottaway of the Carnegie Endowment for International Peace. “The United States is not playing a role in other critical Middle East initiatives, Ottaway noted, including an Egyptian effort to reconcile the two major Palestinian parties, Fatah and Hamas, and negotiations between Iran and the Gulf Cooperation Council sheikdoms,” Wright wrote. “The Bush administration is absent ‘across the board,’ she said.”

Bruce Riedel of the Brookings Institution, who one of the U.S. negotiators at the last Syrian-Israeli talks in 2000, told Reuters that the Turkish effort underlined the limits of current U.S. influence:

“What we see going on is the increasing irrelevance of the Bush administration to what happens in the region.”