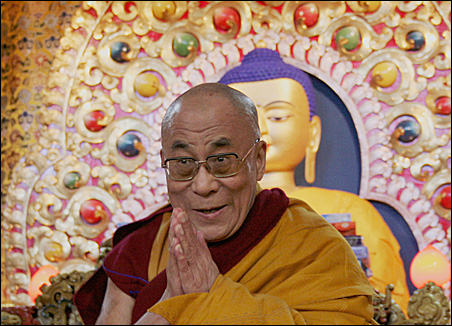 ROCHESTER, MINN. — The press that followed a recent visit by the Dalai Lama to the Mayo Clinic focused primarily on the spiritual leader’s comments about the Chinese crackdown on protest in Tibet. It isn’t hard to imagine why. The meeting’s contentious international backdrop — a conflict underscored by the sidewalk appearance of a strangely polished crew of 50 or so pro-Chinese demonstrators mounting a lonely crusade to tarnish the cause of Tibetan autonomy — was an easier tale to tell than the less easily digested topic of the daylong event itself.

The oversight was unfortunate, because the case being made during the April 16 colloquium titled “Investigating the Mind-Body Connection: The Science and Clinical Applications of Meditation,” seems far more destabilizing than the political movement in Tibet.

It’s one thing to ponder the irony of a professional-seeming protest in defense of a government that does not allow protest. It’s quite another thing to witness the brain trust behind the brand more associated with Western medicine than any other giving forum to the emerging science of mindfulness training, acceptance, positive thinking and compassion. The first cause is about political change. The second is cosmological.

Thanks to the Dalai Lama’s public embrace of science, and his personal embrace of Mayo Clinic Rochester for his health care, the clinic had been able to team up with the leader’s Boulder, Colo.-based Mind & Life Institute to organize an elite gathering of mind-body science practitioners. They ranged from best-selling emotions sciences author Daniel Goleman to the University of Wisconsin neuro-imaging scientist Richard Davidson and University of Massachusetts molecular biologist-turned-mindfulness-training-scientist Jon Kabat-Zinn and others.

The Buddhist meditative tradition
The Dalai Lama’s prescription is that of the Buddhist meditative tradition: selecting and focusing on positive mental states such as compassion, gratitude and joy, while challenging negative mental states such as anger, jealousy, anxiety and a distracted state of being. In practice this means daily meditative practice intent on clearing mental clutter and developing more clarity of attention and moment-by-moment awareness.

The Dalai Lama has long believed that so-called mindfulness meditation has beneficial effects on human health and well-being, and thanks to research conducted by Davidson and others, we now know that the brain and body do indeed change for the better as a result of such practice, and through measurable physiological pathways more complex than had previously been imagined.

Researchers have known for years, for example, that a bilateral brain region known as the prefrontal cortex, or PFC, is involved in developing responses to emotionally laden thoughts, and that the way we respond to the events and thoughts in our lives is often determined by whether the brain draws on the right side of our PFC or its left. Operating below the level of awareness, the right side of the prefrontal cortex responds to problems with an eye toward punishments and avenues of withdrawal, while the left side processes thoughts which are generally positive and tuned to rewards. Damage the left prefrontal cortex and depression increases; those who tend to preferentially use the left side of their prefrontal cortex tend to get over problems faster than do those who process emotion-laden thoughts from the right. Significant for the discussion of physical health, those who preferentially use the left prefrontal cortex show lower baseline levels of the stress hormone cortisol.

Stress chemicals like cortisol have been shown to be advantageous when experienced in brief windows, but research suggests that a chronic elevation of cortisol is related to a veritable kitchen sink of medical and cognitive problems — including poor immune function; poor response to vaccines; longer healing times for injuries; more cavities, allergies and asthma; higher depositions of abdominal fat (a risk factor for cancer); and greater difficulty forming and recalling memories.

The dangers of chronic frustration
A separate area of research has linked chronic frustration with disruption of your heart-rate variability, which, sustained over time, the body begins to recognize as its baseline state, bringing about an inhibition of the vital bodily calming mechanism that is your parasympathetic nervous system. Feel frustrated long enough and your body ceases to calm itself.

By wiring EEG sensors to the heads of Buddhist monks and those attempting to meditate for the first time, then examining brain activity as expressed on functional MRI images, Davidson and Kabat-Zinn have learned that meditation employs the left prefrontal cortex — some monks he has studied have greater left prefrontal orientation than ever previously observed — and that over time, meditative practice can change the orientation from the right to the left of those who take up the activity. Brain circuitry is not fixed, in other words. To the contrary, said Davidson during a research-based session at Mayo, “the brain is the organ that is built to change in response to training. Happiness, compassion, and clarity of attention are the product of skills, and these skills can be enhanced through mental training.”

After hearing the case that meditative mental training can help people stay healthier and recover more quickly from illness, the Mayo audience of 350 or so faculty and staff entered more culturally problematic territory — subject matter that seemed to be talked around as much as it was examined. In short, while medicine is beginning to take seriously the notion that the cultivation of compassion and mindfulness is beneficial for physical health, medicine as practiced today is often antithetical to the very mindfulness and spiritual “present-ness” sought after in meditative practice.

An East-West paradox?
The clinic may have established a “mind-body” Department of Integrative Medicine and gathered with earnest enthusiasm to hear from the top names in mind-body research, but Mayo is nothing if not the face of Western medicine in all its dichotomous cleaving of the spirit from the biology, both in culture and practice. The medical embrace of meditative compassion would seem to face a paradox: The grueling rise to the highest levels of medical specialization does not appear conducive to regular breaks for contemplative meditative practice, nor does the culture of omnipotence, authority and spirit of conquest within medical training seem a smooth fit for the sense of acceptance embodied in Buddhism.

The bad news came in large part from Roshi Joan Halifax, a Zen priest and medical anthropologist whose remarks suggested that embracing the Buddhist prescription will likely require more than stocking the patient information center with brochures on the value of meditation. For example, the Dalai Lama’s thoughts on death are clear: “I think the most important thing,” according to a Web collection of his sayings, “is to try and do our best to ensure that dying person may depart quietly, with serenity and in a peace.” Caregivers of those at the end of life experience high rates of burnout, said Halifax, due to the “moral stress” brought on by the damage done to this peace by conflicting agendas of medicine in the face of death.

“A lot of clinicians feel reluctant to speak openly about the trajectory of an illness,” she said, “with death being the end of the road.” Halifax described the multipronged source of the physician’s moral stress that leads him or her to avoid the dying: interventions which cause pain and suffering, lack of communication about the goals of care, and “the prolonging of dying through technology.” While she acknowledged their role in transitory illness, flashing a picture of an iconic string of ICU life preserving tubes and machinery, she said simply, “This is our nightmare, to be put on a respirator.”

Cultivating compassion, wisdom in the face of death
Halifax advocated helping physicians and caregivers in “cultivating compassion and wisdom in the presence of death.” The ability to “presence pain and suffering without pitying, consoling or denying,” said Halifax, requires “a quality of attention that is panoramic, perceptive and nonjudgmental.” While meditative practice would seem to develop the skill in question, hanging over her argument was a question that went unasked: How likely are these skills to be developed in medical training, much less the culture and bureaucracy of large medical centers like Mayo? Research may support the benefits of meditative practice for patients, but if they are to care for the dying and gravely ill, physicians would appear to need an extra dose the same medicine. Is the Buddhist tradition even possible within the umbrella of Western medicine?

“Allow yourself to experience that futility,” she said when a Mayo doctor from Brazil asked how he should handle his negative emotions that gave rise when watching patients in his homeland die unnecessarily due to a lack of resources. “To be with things as they are. There is still a resource that is there — your presence.”

For the Mayo brothers, looking down from nearby oversize vintage photos upon the gathering, this could not have seemed a stranger request for the heirs to their legacy. Nor could the answer given to a similar question a few minutes later — and which had been put to Mattieu Ricard, a French-born monk from Katmandu and a subject of Davidson’s EEG experiments on the brain activity of expert level meditation.

“Transform your attitude to the suffering person,” said Ricard, who has spent more than 10,000 hours in contemplative meditation. “Let your heart become a mass of brilliant white light, and the suffering becomes dissolved in it.”

The nature of compassion and suffering
After a lunch-hour break, the audience stood silently to greet the Dalai Lama, a sometimes impish figure who held forth bare-armed and robed from an armchair in the center of the stage. Answering questions put to him by Goleman and later the audience, the Dalai Lama alternated from English to long statements toward his interpreter, presumably in Tibetic, touching on the nature of compassion and suffering and its intersection with medical care. He rambled at times in a way that indicated no worries about social pressures like staying on message, making easily digestible bullet points, winning over his audience — and yet winning over his audience regardless.

He explained his position that the human dilemma is one whereby anger and attachment — while useful if a transitory emotion in species throughout the animal kingdom — are given undue extension by the human skill for imagination, with negative results.

“This is where the problems arise,” he said. “Because of this, we need a special effort to increase our affection.”

He called compassion “an immune system for the toxins of the mind.” He also, early in his remarks, slipped in mention of the problem at hand, a statement that sparked no shortage of nervous laughter in the highly credentialed crowd.

“In Tibet we have a saying,” he said. “The physician is a great scholar, but his medicine is not effective because his heart is not that good.”

Paul Scott is a freelance writer based in Rochester.