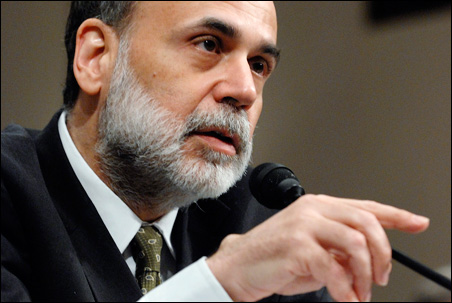 After seven months of downward adjustments, the Federal Reserve cut a key interest rate Wednesday — while also indicating it’ll take some time to see how this and six earlier rate cuts, combined with the new economic stimulus checks, affect the economy before deciding what to do next. Those who read the Fed’s tea leaves expressed a variety of opinions on the day’s events, from anxiety over inflation to fears that we haven’t seen the worst of the housing crisis.

“The Fed’s action, lowering short-term rates to 2 percent from 2.25 percent, followed new indications that the American economy remained fragile,  … [but] not an overall downturn that would have indicated a full recession had begun,” said the New York Times.

“The poor record of economic growth, reported by the Commerce Department on Wednesday morning, reflected what most Americans have been experiencing since late last year — declines in consumer spending, housing prices and business investment, along with spreading unemployment.”

Greg Ip, a Wall Street Journal reporter who covers the Fed, expanded a bit on those conditions in an interview on PBS’ “NewsHour With Jim Lehrer”:

“The economy is quite weak. We just heard from the Commerce Department today that, in the first quarter, the economy only grew at an annual rate of 0.6 percent. That’s about the same rate it grew at in the fourth quarter of last year.

Weakest since 2001
“You put those two together, it’s the weakest period for the economy since 2001, when we were in recession. And it could get worse.

“Home prices continue to decline,” he said. “And it’s very difficult for people who want to buy a home to even get a loan because banks are so reluctant to make new loans. And on top of that, we have the oil price well over $100. That’s eating into consumers’ purchasing power. You put all that together, and it’s clear that there are still significant risks to the economy.”

Still, the Fed’s rate cut was not unanimous. “The Fed’s action once again opened a window into what many economists say has been a lively internal debate over whether inflation or a slowing economy posed a greater threat,” the Times said.

“Two anti-inflation hawks — Richard W. Fisher, president of the Dallas Fed, and Charles I. Plosser, president of the Philadelphia Fed — voted against lowering the rates, as they had last month when the Fed’s action cut rates to 2.25 from 3 percent.”

Alexandra Twin of CNNMoney.com quoted Steven Goldman, market strategist at Weeden & Co. “The announcement fulfilled expectations that some inflationary concerns are creeping in,” he said. “But it also indicated that the bankers think the economy is starting to or will soon start to respond favorably to the series of cuts already in place.”

As a result, he told Twin, “This may be the last cut for the foreseeable future.”

Administration: Core inflation stable
“While many economists say that inflation has become as big a threat as a recession, especially because of soaring energy and food prices,” the Times said, “the Bush administration maintains that ‘core inflation’ — outside the energy and food sectors — has remained stable, at about the same range of about 2.5 percent that it has been in the last four years.”

Given the dual, competing concerns, “Leaders of the central bank are trying to maintain a tough balance of signaling that they will cut rates further if the economy or financial markets deteriorate more than expected, but that otherwise they are inclined to hold tight, to keep from overstimulating the economy and letting inflation get out of hand,” wrote Neil Irwin of the Washington Post.

Others noted that the Fed was not only striking a balance, it was keeping its options open. As TheStreet.com put it, “The language in the Fed’s policy statement accompanying its decision appeared to be deliberately ambiguous to give the central bank leeway to either cut, stand pat or even raise rates at its next meeting. The move could be intended to allow the central bank to act on economic developments without spurring market expectations in any one direction.

” ‘They left the door open to take a little breather here because there’s naturally a lag in the economy before Fed activity takes effect,’ says Len Blum, managing director with Westwood Capital. ‘[Fed Chairman] Ben Bernanke wants to gauge the effects of the dramatic actions he’s taken over the last few months. Still, this is a weak economy, housing prices still have a long way to go and the consumer is getting pinched at every possible angle, so I expect we’ll see more rate cuts.’ ”

“So for some months now, they have been saying that there were downside risks to growth, which was code for, ‘We’re inclined to lower interest rates again.’ They took that sentence out, which is code for, ‘We think we’re going to sit here for a little while and see if all the stuff we’ve already done has the beneficial impact that we expect for the economy.'”

While they sit and watch, Bloomberg.com suggests that they’ll be seeing some more consumer retrenchment. The website quoted Nigel Gault, chief U.S. economist at Global Insight Inc., a Massachusetts forecasting firm, as saying, “The consumer is pulling back. We are probably going to have a negative second quarter as businesses start running down inventories. Weakness in housing will continue.”

Indeed, Commerce Secretary Carlos Gutierrez acknowledged in an interview with Bloomberg, “We’re going to have a difficult first-half.” The timing of the tax rebates “couldn’t be better,’ he said. “That’ll help as we head into the second half of the year.”