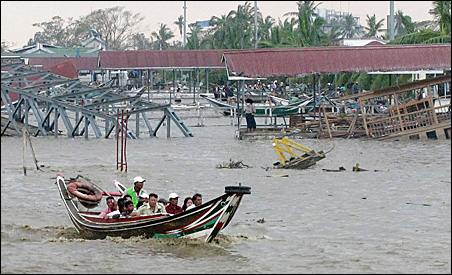 REUTERS
A swollen river, destroyed wharves in Yangon, Myanmar, are among the many challenges facing survivors since Cyclone Nargis hit.

Five days after Cyclone Nargis battered Myanmar’s coastal areas, estimates of its devastation are climbing dramatically. The nation’s immediate needs — food, temporary shelter, sanitation measures, medicine — will be followed by the need to rebuild houses, towns, bridges and roads. And then? The media are already speculating about the cyclone’s potential effects on Myanmar’s military junta.

According to AccuWeather.com, “The wind and the rain were damaging, but responsible for most deaths was a 12-foot tidal wave that charged in from the Bay of Bengal. The wall of water pushed by the fury of the storm simply inundated everything for up to 12 miles inland. A lack of interconnecting roadways and bridges as well as lack of communication may have contributed tragically to the absence of early warnings and the inability to evacuate.”

On Wednesday, a U.S. diplomat in Yangon (formerly Rangoon, the nation’s largest city) suggested that the number of dead could be vastly higher than first estimated, CNN.com reported. It quoted the U.S. charge d’affaires in Yangon, Shari Villarosa:

“The information we are receiving indicates over 100,000 deaths,” she said in a conference call. According to Reuters, “She said recent estimates by the Myanmar government put the death toll at 70,000 deaths, primarily in the delta area.”

More than a million estimated homeless
In addition, “More than 1 million people may have been left homeless,” wrote Demian McLean of Bloomberg.com. “Teams from aid group Doctors Without Borders found 80 percent of houses damaged and [3-foot] flood waters in some areas of Daala and Twante townships, where 300,000 people lived, in the Irrawaddy River delta area.”

Few aid groups are in the area yet, so assessments have been changing daily as people begin to reach the most affected areas.

” ‘Even in the best of times, it takes two days to reach the delta,’ said John Sparrow, Kuala Lumpur-based spokesman for the International Federation of Red Cross and Red Crescent Societies. ‘You can imagine what it’s like when bridges are out, roads are out and half the countryside is under water.’

” ‘Under these circumstances, infectious diseases such as cholera can spread easily,’ Doctors Without Borders said in a statement.”

The Myanmar government, long known for its isolationist instincts, reached out to the international community. According to the New Zealand Herald, “Myanmar’s Information Minister Kyaw Hsan told reporters at a news conference: ‘We need help, not only from our nationals but also from overseas. We are greatly thankful to friendly countries which are giving assistance to us.’

Many still wait for visas
“But [Wednesday],” the Herald said, “aid workers continue to battle to get access into the country, …  delayed by the regime’s refusal to waive visa requirements.” Continued problems were reported today.

The Herald quoted Oxfam New Zealand’s executive director, Barry Coates: ” ‘It has been a huge hurdle for aid workers as Myanmar rulers said outside aid workers needed to negotiate to get access into the country.’ He said Oxfam overcame the problem by working with partner organisations which were ‘already working on the ground at a grassroots level.’ “

The Minneapolis-based American Refugee Committee is among the aid organizations mobilizing to help, as Sharon Schmickle reported on MinnPost.com Wednesday.

The cyclone’s devastation comes in the context of extreme poverty, government repression and months of political protests in the nation formerly known as Burma.

According to Australia’s ABC.net, “In a bid to placate an irate public, the junta in January announced a freeze on oil prices, but limited the supply instead, analysts say.

Food shortages possible
“Meanwhile, rice prices have risen around the globe. Burma had stood to benefit with export deals with Sri Lanka and Bangladesh, but now the cyclone has ravaged the nation’s rice bowl and cast doubt on whether there will be enough rice for its own people.

“Win Min, a Burma analyst attached to Chiang Mai University in Thailand, said the junta’s decision to plough on with a referendum on its much-derided constitution despite the cyclone would also lose it goodwill. Most of the balloting — the first in Burma in 18 years — will proceed as scheduled on Saturday (local time), while voting in 47 townships worst hit by the cyclone will be postponed by two weeks.”

In a piece titled “Could Cyclone Nargis spell political change for Myanmar,” Reuters writer Joanne Tomkinson noted, “With cracks in the secretive military’s isolationism appearing, food prices soaring, and frustrations mounting, many commentators are now wondering whether the repressive regime’s days could be numbered.” Citing Britain’s Telegraph newspaper, Tomkinson wrote, “In the short term, the delays in delivering aid mean that it’s likely that survivors will strongly reject the new constitution in a referendum scheduled for next Saturday in unaffected areas, and May 24 in the flooded provinces.

“Even this notoriously secretive regime will have difficulty covering this up, the paper says. And after that, with shortages of basic supplies already affecting the population, there is a strong chance that a new protest movement could be triggered, it says.

“And there are greater opportunities for the international community to influence events inside the country too. Genuine dialogue, albeit over tents and food supplies for now, could now bring about real change, the Telegraph says.”

A Western diplomat told the Telegraph: “Maybe it is a back door to establishing a bit of trust and understanding. Maybe this is a chance to open a crack in Burma’s crippling isolation.”

Will Myanmar’s junta survive the cyclone?