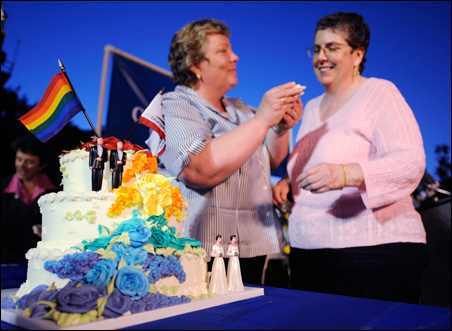 The nation’s largest state often serves as a cultural harbinger, a place that sets the national tone on everything from food to fashion to fantasy. Thursday’s historic state Supreme Court decision validating same-sex marriage may be difficult to contain within California’s borders, especially if it survives a tempestuous ballot initiative fight expected in November. That fight, in turn, could spill over to the presidential election, with ramifications in California and beyond.

Thursday’s decision came from what’s generally considered a conservative court. The 4-3 ruling said that same-sex unions must be permitted the “respect and dignity” that marriage bestows. It’s not equal enough that gay couples in California, as in nine other states, already enjoy equal rights and benefits. They must be afforded the same “marriage” as other couples under the law. To view marriage otherwise would be to discriminate on the basis of sexual orientation, something the court was not prepared to do.

“One of the core elements embodied in the state constitutional right to marry is the right of an individual and a couple to have their own official family relationship accorded respect and dignity equal to that accorded the family relationships of other couples,” Chief Justice Ronald George wrote for the majority.

State laws that limit gay unions to domestic-partnership status “impinge upon the fundamental interests of same-sex couples,” he wrote, adding that there is no compelling state interest in standing in the way of same-sex marriage.

But Justice Marvin Baxter wrote for the minority that the court “does not have the right to erase, then recast, the age-old definition of marriage, as virtually all societies have understood it, in order to satisfy its own contemporary notions of equality and justice.”

Backlash begins anew
Critics lashed out against activist judges, predicting that voters would overturn Thursday’s ruling. California Gov. Arnold Schwarzenegger signaled, however, that he would not try to undermine the court’s decision and repeated his vow to oppose a ballot measure that would overturn it. “I respect the court’s decision and, as governor, I will uphold its ruling,” he said.

Massachusetts is the only other state to have embedded gay marriage in law. In 2003 its high court struck down a ban against same-sex marriage using a narrower legal theory. More recently, high courts in New York, New Jersey and Washington have declined to extend marriage rights to gay couples.

OutFront Minnesota said Thursday that while some Minnesotans are expected to travel to California to marry, state law does not recognize marriages performed outside the state. Minnesota banned same-sex marriages in 1997.

Thursday’s decision arose from San Francisco’s surge of gay weddings, which, in 2004, spurred a conservative backlash. Several states later passed constitutional amendments banning same-sex marriage. The San Francisco “experiment” ended a month after it began when the State Supreme Court intervened. It reconsidered after a series of lower Court cases, reaching back six decades to a case that overturned the state’s ban on interracial marriages.

The court left open possible action by the state legislature to employ a term other than “marriage” to denote state-sanctioned unions as long as the term was used across the board to describe both same and opposite-sex unions. That lays open a potential compromise allowing “marriage” to retain its religious meaning while state law calls it something else.

California’s chief justice emphasized Thursday that the court’s action does not require ministers, priests or rabbis to perform same-sex marriage ceremonies. He added that the decision did “not affect the constitutional validity of the existing prohibitions against polygamy and the marriage of close relatives.”

On PBS’ online NewsHour, Geoffrey Kors, director of Equality California, praised the ruling. “The key thing the court ruled,” he said, “is that the equal protection clause of the state constitution requires just that: equality. And domestic partnership or any other status that is not identical in name, rights and benefits violates the constitution.

Jordan Lorence, attorney for the Allied Defense Fund, disagreed. “This shows why we need to have this issue decided by a constitutional amendment passed by the people [rather than by judges],” he said. “A bare 4-3 majority ruling this way, nullifying a vote of the people just eight years ago that almost two-thirds of Californians voted to define marriage as one man and one woman. That is not an act of bigotry; that is an act of common sense, good, reasonable public policy that’s existed since the dawn of time.”

The California ballot campaign may offer an indication of changes in the way Americans view gay marriage. Tolerance for homosexual rights has increased in recent decades, according to polls. Americans now appear to be equally divided between those who favor government sanction of gay marriage or civil unions and those who oppose them. When the term “marriage” is used, however, the approval numbers drop.

The issue’s potential impact on the presidential race was unclear on Thursday, largely because the likely party nominees have similar views. Republican John McCain defines marriage as a union between a man and a woman, but opposes a constitutional ban on same-sex marriage. He wants individual states to decide the issue. Democrat Barack Obama opposes same-sex marriage, supports civil unions and opposes a constitutional ban. (Hillary Rodham Clinton, who won California’s Democratic primary and the majority of its delegates, has expressed similar views to Obama’s.)

California conservatives hope for greater division on the question than that. If the initiative energizes enough religious conservatives to make California competitive, the Republican nominee could gain an advantage nationally. Even the most optimistic Democrat would doubt that Barack Obama could win the White House without winning California.

Will same-sex marriage ruling spread to rest of union?