As expected, Gov. Tim Pawlenty vetoed a bill that would have deferred foreclosure proceedings for up to a year for some homeowners victimized by predatory loans. During this year’s legislative session, the Republican governor signaled his displeasure with the foreclosure measure, claiming that it would discourage lenders from making new home loans in this state.

The bill’s chief authors, Sen. Ellen Anderson and Rep. Jim Davnie, argued that their proposal would help 12,000 Minnesotans in danger of losing their homes as the wave of foreclosures continues to gain momentum in 2008.

Anderson and Davnie, both DFLers, maintained that action was needed this year to deal with foreclosures that are approaching rates not seen since the Great Depression.
Back then, Minnesota’s governor was willing to take decisive action to help struggling families hold on to their homes and farms.

On Feb. 24, 1933, Floyd B. Olson — the state’s first Farmer-Labor Party governor — issued an executive order halting mortgage foreclosures in the state. The short-term suspension, scheduled to last until May 1, was intended to buy time for people facing sheriffs’ sales and to pressure the Legislature to come up with a longer-term approach to combating foreclosures.

Knowing that he was on shaky legal grounds, Olson maintained that he was not ordering a foreclosure moratorium although that was the effect of his action. The executive order applied to urban homesteads as well as to farm property, but the governor’s proclamation focused on the rural impact of the wave of forced evictions sweeping through the state. 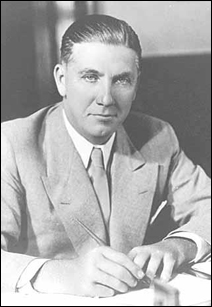 Preserving law and order
As the Depression entered its most brutal phase, desperate farmers all over the country were resorting to violence and intimidation in an effort to halt the eviction of their friends and neighbors. In Minnesota, the Farm Holiday Association blocked foreclosure sales by organizing throngs of supporters to pack the sheriff’s auctions and prevent perspective purchasers from bidding on the foreclosed property.

In his February 1933 proclamation, Olson declared that he was acting to prevent outbreaks of violence throughout the state: “I am doing that which I could do under martial law without declaring martial law to halt impending riots and riots and insurrection. It is my duty as Governor to preserve law and order.”

Olson’s bold move generated a mixed reaction from the Twin Cities’ major daily newspapers. The St. Paul Pioneer Press expressed some hesitation as it issued a tepid endorsement of the suspension:

“With open resistance to foreclosures springing up in many parts of the state, the governor had a choice between this intelligent policy and the use of armed forces to uphold the letter of the law. But a word of caution is in order. If the total result is merely to postpone the day of reckoning and to delay the reduction of the load of debt that hangs on the land no longer able to support it, such concessions will do more harm than good. If it is used to make a new adjustment between debtors and creditors where necessary, it will be sound statesmanship.”

In an effort to take a balanced approach, the Minneapolis Journal urged mortgagors to continue to pay their debts even while the foreclosure suspension was in effect. “This foreclosure holiday is necessarily going to cause some hardship for creditors, many of whom have obligations of their own to meet. The holiday offers a haven for those whose poverty makes a haven urgently necessary. If they are wise, those who have no need for such a haven will pay their debts on the dates due, regardless of the temporary removal of the hammer’s shadow.”

The Minneapolis Tribune stopped short of opposing Olson’s action but tilted its editorial toward the creditors who held the mortgages rather than toward the debtors who were facing foreclosures. “It is all too easy to diabolize the creditor without realizing that the vast majority of persons, even the debtors themselves are creditors,” the paper noted. “So long as nine-tenths of the business of the world is conducted on credit, so long must we have creditors.”

Olson’s action was sharply criticized by some conservative legislators who maintained that he had overstepped his authority, but the House and Senate, bowing to strong public sentiment, moved quickly to ratify the temporary suspension. Later, the Legislature would provide more relief for beleaguered farmers and homeowners by extending the mortgage redemption period through May 1, 1935.

Olson’s bold move at the start of his second term would do much to embellish his reputation as an activist governor who used the powers of his office to combat the economic and social devastation caused by the Great Depression in Minnesota.

In 1933, a governor moved boldly to halt foreclosures