The Lynx are hitting all their shots so far this season.

Saturday, the Augustus brand — and the Lynx brand, for that matter — received a nice boost when the third-year pro was named to the U.S. Olympic team.

The Lynx have started their season with four straight wins. Augustus is among the league’s leading scorers. It’s too early to tell how attendance will play out, but here’s the good news and the bad news for the Lynx: Augustus made the Olympic team.

The good news is her profile will rise. Her national TV presence will increase. People will be talking about her in the same breath as four-time Olympian Lisa Leslie, who is a woman athlete with household name chops.

Augustus, upon being named to the team, told the Pioneer Press’s Tim Leighton Saturday: “I want to go over there [to Beijing] and represent the Lynx and our country … Before they had the WNBA, all we had to look up to was playing the Olympics. I am fortunate to be able to be doing both.”

So, she’s got her Lynx marketing talking points down nicely.

But the bad news: As part of the Olympic commitment, the WNBA will take a hiatus for almost all of August. If the Lynx continue to stay in first place and build momentum, that can all be taken away come July 27.

The Lynx and WNBA will halt all action then until Aug. 28.

What’s a league and franchise to do? The NHL has had a similar break for the Winter Olympics, but only for 16 days. Injuries occur. Hot teams cool down.

Angela Taylor Lynx vice president of business development, told MinnPost recently that, in her view, “I think the Olympucs are great for the WNBA … For the month of August, Seimone Augustus will be part of the thousands of the best athletes in the world, the Olympics, which is a great platform for us to leverage as well.”

Other Lynx players will be busy promoting team
Lynx players who won’t be in China will be making a host of public appearances and participating in promotional events from Aug. 8 to 24, when Augustus will be center stage.

Still, in a conference call with Olympics reporters Saturday, Val Ackerman (the former president of the WNBA and now the president of USA Basketball, which runs the Olympic program) acknowledged the break in the schedule is “not an ideal scenario,” for the WNBA or the U.S. Olympic team. After all, the U.S. women will have to leave their WNBA teams and quickly establish chemistry for the Olympics. 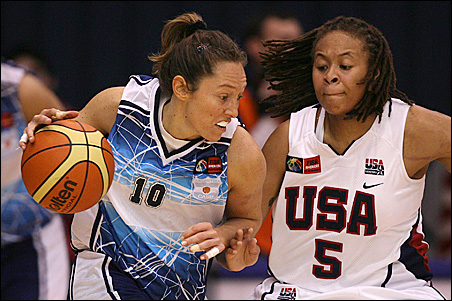 Katie Smith, the former Lynx star who is now playing in Detroit and who will make her third Olympic appearance, told reporters on the conference call Saturday that it is difficult to stop the WNBA season.

“You are pausing your season and your timing and your offenses and switching right over to something else,” she said. Then, after the excitement of the Olympics, “All of a sudden you might have a couple days to get readjusted to your [WNBA] teammates.”

Then, Smith added: “There are some challenges swiching gears, mentally and physically. But we’re all very talented and smart ladies. We’ll find a way to get it done.”

Here in Minnesota, it will be fascinating to watch how the Lynx — amid a potential Twins pennant race and the start of the Vikings season — can lift their visibility without any games.

But then, it will be August and the real star here — Ms. Augustus — is surely properly named for the month.