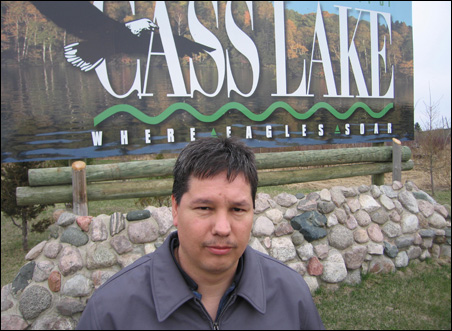 MinnPost photo by Mike Mosedale
Arthur “Archie” LaRose, chairman-elect of the Leech Lake Band of Ojibwe: “I want to restore the work ethic in our people.”

CASS LAKE, MINN. — On a recent Monday afternoon, near the end of business hours, Arthur “Archie” LaRose made the tactical error of walking into the reception area outside his Cass Lake office. Everyone, it seemed, wanted something from LaRose, the 37 year-old chairman-elect of the Leech Lake Band of Ojibwe.

One young mother, with two kids in tow and troubles with her food stamps, beseeched him for a gas voucher. A grandmother meekly asked for emergency assistance with an overdue light bill. A band member visiting from the Twin Cities said she needed some cash for transportation home.

Like a seasoned ward healer, LaRose fielded the requests diplomatically, urging each of his supplicants “fill out an app.” At the same time, he slowly maneuvered his way to the exit on his way to a meeting in Bemidji with two political allies.

Once out of earshot, LaRose offered a frank assessment of the persistent economic and social problems at Leech Lake. “I want to restore the work ethic in our people. A lot of them try, but with our hiring practices, it’s hard for them to get jobs,” he said. “And some of these younger people come in and try to take advantage. You help them out once or twice and then they keep coming back in. We do have some people who are just sitting back and collecting.”

Still, in his six years as secretary-treasurer — the band’s second most powerful elected office — LaRose said he has “helped a lot of people in a lot of ways.” As he explains it, he doesn’t wish to be “stingy with the people’s dime.”

LaRose has made a populist economic agenda the cornerstone of his political platform. Among other things, he has proposed a revenue sharing plan — commonly called “per capita” payments — that would award yearly cash grants to each adult member of the 9,000-strong band.  Drawing on $3 million that band receives annually from the state of Minnesota from a 1972 hunting and fishing rights settlement, LaRose figures that recipients would get between $700 to $1,000.

Those figures are paltry in contrast to the payments made by such casino-rich tribes as the Shakopee Mdewakanton Sioux Community, where annual per capita grants are estimated at around a million dollars a year. Nonetheless, LaRose’s plan constitutes a significant break with tradition at Leech Lake, where resources have long been pooled for use in social programs. And, apparently, it’s a break with tradition that Leech Lakers are ready for.

Top vote getter
In an April 1 primary election, competing with five other candidates, LaRose garnered an unprecedented 55.9 percent of the vote. Under the band’s election rules, a candidate with a minimum of 51 percent in a primary wins outright. While that provision had been in place for a decade, no candidate for chairman ever reached the threshold.

More remarkably, LaRose’s status as the reservation’s top vote getter has endured despite a blizzard of bad publicity and brutal political infighting. In recent years, LaRose was arrested and jailed twice after fellow council members worked to ban him from entering the band’s casinos, allegedly for intimidating a casino employee into giving him access to a security tape.

“The county judge dismissed the charges both time. He knew it was political,” LaRose said with a shrug. “I spent three hours in jail the first time, 15 hours the second time. But I wasn’t going to back down. It was wrong in everybody’s eyes.”

Over the years, LaRose’s rivals have accused him of everything from personal corruption to nepotism to involvement in a notorious casino heist and an unseemly affiliation with a reservation gang called the Native Mob.  LaRose offers the usual blunt denials but, for the most part, he laughs off the accusations.

“Back in 2003, they had some gang task force meetings at Mille Lacs and I guess my name kept coming up. People were saying that I was linked to the Native Mob and that I controlled the prison vote,” said LaRose, adding that the accusations seemed to have been based on the criminal record of an older brother. “It was just the ultimate lie. I wish I had been there to defend myself because I would have loved to see the documentation.”

Mike Bongo, the executive director of the Bemidji-based non-profit Northwest Indian OIC and a LaRose ally, said he finds such accusations ludicrous. “The head of the Native Mob? Every time I hear this stuff I chuckle because poor Archie has been so unfairly tainted,” said Bongo, who was the leading vote getter in the primary race to replace LaRose as secretary-treasurer. “The things his detractors say about him couldn’t be further from the truth. He’s a good young man, honest as the days as long and very faithful. You know, he and his wife have been together for 18 years.”

Bill Lawrence, the publisher of the mucking raking newspaper The Native American Press/Ojibwe News, attributes some of LaRose’s political success to the unpopular practices of the ruling faction at Leech Lake, led by outgoing chairman George Goggleye. “Those guys abused their power and I think the people were sick of it,” said Lawrence, whose paper has been highly critical of Goggleye. 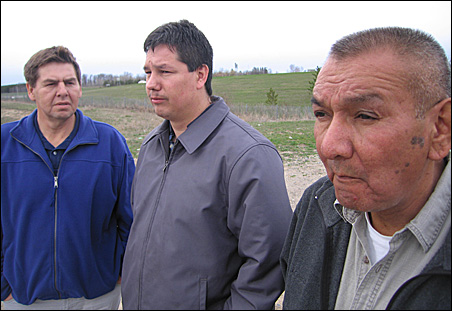 MinnPost photo by Mike Mosedale
LaRose, center, is working on the campaigns of two political allies running for seats on the council, Mike Bongo, left, and Eugene “Ribs” Whitebird.

But Lawrence also credits LaRose’s famously tireless approach to campaigning, a strategy that included — by LaRose’s count — 700 door knocking visits to residences across the sprawling reservation in the lead up to the primary.  Ironically, Lawrence notes, the luxury to campaign so hard was made possible by LaRose’s fellow council members, who earlier stripped him of much of his authority as secretary-treasurer.

“After those guys took away his responsibilities, Archie had a lot of time on his hands,” Lawrence observed. “Most candidates can’t take time off for door knocking and I think that was a big factor. They [the ruling faction] would have been better off if they just tried to overwhelm him with his duties.”

Frank Bibeau, the former director of legal services for the band, said LaRose works hard and “understands the idea of being respectful.” “Archie grew up with his grandmother and I think he got her values,” Bibeau said, adding, with a laugh: “The dude is also very punctual and that’s not a common trait in Indian country.”

The Bingo Bandits case
Born at Cass Lake Indian Hospital and raised at Tract 33, an impoverished tribal housing complex on the outskirts of town, LaRose first gained notoriety on the reservation as an amateur boxer. In his first foray into tribal politics, he lost by a narrow margin. Lawrence attributes that defeat to the lingering suspicions about LaRose’s involvement in the only casino heist in modern Minnesota history — the 1994 armed robbery of the Palace Casino in Cass Lake by five masked man in coveralls.

Soon after, LaRose and four other young Leech Lakers were arrested and jailed in connection with the crime, which netted some $27,000 in cash and jewelry. After the trials of two suspects resulted in acquittals, charges against LaRose were dismissed. To this day, the case of the Bingo Bandits, as they came to be known, remains unsolved. LaRose insists he had nothing to do with the robbery.

Despite the disappointment of his first failed bid for a seat on the tribal council, LaRose stayed involved in tribal politics. He worked on the removal of then-chairman Eli Hunt, a one-time ally. In 2002, he was elected to the office of secretary-treasurer and quickly wound up at odds with the majority faction on the five-member tribal council. In 2004, the council members voted to remove him from office, alleging that he had improperly authorized the expenditure of some $40,000 on his mother’s home.

LaRose, who denied wrong doing, fought to get his name on the ballot for the special election, campaigned hard, and was re-elected to his old position. In 2006, he won the office again in a regularly scheduled election, again by a large margin.

These days, LaRose is biding his time until his official swearing-in ceremony in July. He is also working on the campaigns of two political allies running for seats on the council, Mike Bongo and Eugene “Ribs” Whitebird. Because Bongo and Whitebird both finished in first place in their respective primaries, LaRose is optimistic that he will wind up with a controlling voting block on the council — critical if LaRose is to enact his agenda.

In addition to the revenue sharing plan, LaRose ticks off other “reform” plans, an admixture of small and big changes, with a few populist gestures thrown in for good measure. For instance, LaRose wants to eliminate the requirement that band members who rent rooms at the casino have a credit card. “It’s a direct insult to our people and it affects our revenues,” LaRose said. “The majority of our people can’t afford credit cards, or even get cards. Why would you have a policy that insults your people and hurts your main source of revenue, which is the casino business? We own these three casinos and hotels together.”

Reservation problems
On a more substantial front, LaRose said he wants to change the band’s approach to dealing with two of the more intransigent problems in Indian country: substance abuse and employment. Under the band’s drug testing protocols, LaRose said, employees are typically fired when traces of marijuana are detected in their urine.

LaRose said he also hopes to make life — and employment — easier for band members with criminal records and histories of drug use. Two years ago, the tribal council floated a proposal to banish a convicted killer and reputed gang member who’d been released from prison. Among the council members, LaRose alone opposed the idea, which later died in the face of popular opposition.

“We have no authority to banish anyone and it would have violated the U.S. Constitution and the Minnesota Chippewa Tribe Constitution,” LaRose said, adding: “I believe everyone deserves a second chance in life. When people who get out of treatment or jail or prison, they’ve paid their debt to society.”

From casino heist suspect to tribal chairman: The astonishing rise of Archie LaRose