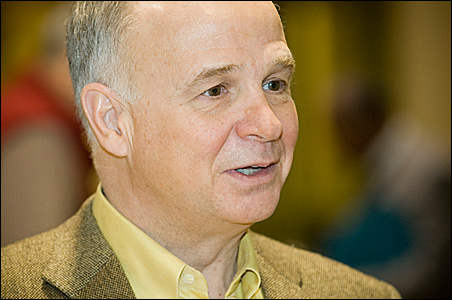 MinnPost photo by John Noltner
Mike Ciresi on the DFL candidate for Senate: “Whether it’s me, or somebody else, we have to have somebody who shows sounds judgment.”

The Senate campaign of Mike Ciresi may be in revival mode.

“All options are open,” said Ciresi late Thursday afternoon when asked whether he is considering getting back into the race.

Ciresi said he is not likely to appear in at the state DFL convention in Rochester, Minn., this weekend, but he also indicated that even if there is an endorsed candidate coming out of the convention, he may run in a September primary. Before dropping out of the race in March, Ciresi had promised to abide by endorsement.

“It is my belief that we have to get this race back to the issues,” Ciresi said. “It is important that Minnesota send a Democrat to Washington, but instead of talking about issues, instead of spending our energy on defeating Norm Coleman, we’re in this morass.”

Ciresi made his comments on the eve of the state convention, where delegates are gathering to bestow endorsement on either Al Franken, who once was heavily favored to win on the first or second ballot, or Jack Nelson-Pallmeyer.

Ciresi said that issues about Franken’s writings as a “satirist” have changed the playing field.

“Whether it’s me, or somebody else,” he said, “we have to have somebody who shows sounds judgment. Nobody’s perfect, but you’ve seen the things he’s written. I’ll say again, all options are on the table.”

Focus on Franken articles
It was the state’s Republican Party that first brought up issues about an article Franken had written for Playboy magazine eight years ago. But it was Rep. Betty McCollum, a supporter of Ciresi, who made that article a major news story when she said last week that it was “offensive” to women and said that Franken would be a detriment to the party if he were to be the Senate candidate.

The Republican Party released more material about Franken’s satire today, this time from a 1995 New York magazine article in which there’s an anecdote about proposing a “Saturday Night Live” skit that involves drugging and raping CBS News correspondent Lesley Stahl.

“That is not satire,” Ciresi said. “I can’t even tell you what that is.”

Franken’s communications director Andy Barr said that  “Coleman’s record on women’s issues” is far more damaging to women than anything Franken may have written in the name of satire years ago.

Ciresi on re-entering the Senate race: ‘All options are open’