The video was downloaded to the web on Saturday, June 20, 2008. By Sunday, it had 1 million hits. By Thursday, it was everywhere — embedded on Facebook and MySpace pages and flooding email inboxes and translating into millions of viewers, thousands of comments, and official “gone viral” status.

But this one is no YouTube vanity trip. This one is different. This one feels important, necessary, and artistic; it’s a concrete manifestation of the change that the world’s leaders have been preaching at a time when the human race could use a little pick-me-up, a little jig in its step.

This one is a high-definition television commercial for hope.

“Pretty cool, huh?” said Matt Harding, when it was suggested to him that, for the first time in history, someone — he — got the entire planet dancing together to the same song.

“I hadn’t even had a chance to sit down and look at until yesterday,” said Harding, a 31-year-old native of Westport, Conn., Thursday by phone from his home in Seattle. 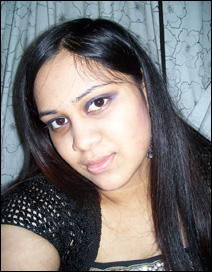 “I finished the trip at the beginning of June. I got home, then we had to record the music, and we shot the last clip in Seattle, and then I had about 10 days to edit the thing and get it done.

“It wasn’t until yesterday that I finally had a quiet moment to sit down and watch it and sort of try to understand the response it’s been getting since I put it up. It’s been really amazing.”

The sum effect of “Dancing,” which is called “Where the Hell Is Matt (2008)” on YouTube, is just that –especially when coupled with the ephemeral music created by Harding’s friend Gary Schyman and sung by Palbasha Siddique, a 17-year-old native of Bangladesh who will be a senior at Minneapolis Southwest High School this year.

‘People are making ring tones out of it’
“It’s crazy,” said Siddique, who lives in Northeast Minneapolis with her mother and brother. “Right now it’s number one on amazon.com in the soundtrack [category], and number six overall, so that’s a really big accomplishment, because even ‘American Idol’  is number nine right now. I just never knew this would turn out so incredible. People are making ring tones out of it. Everyone on Facebook is adding me, and I had no idea there are so many Bengalis in our community, and they have all heard the song.”

“Dancing” has its roots in two previous Harding-dancing videos, which were similar — if lesser — Internet sensations in which Harding danced alone. The videos caught the attention of Stride gum, which helped finance Harding’s travel and production budget. 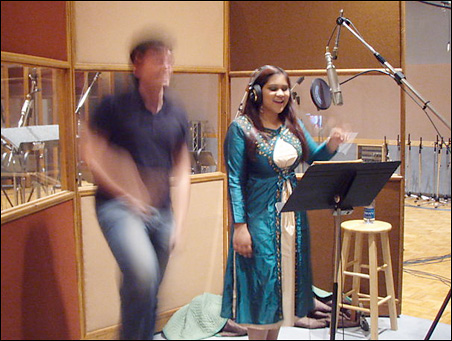 Courtesy of Palbasha Siddique
Harding dances in a recording session with Siddique.

In the FAQ section of his website, Harding writes, “In 2007 Matt went back to Stride with another idea. He realized his bad dancing wasn’t actually all that interesting, and that other people were much better at being bad at it. He showed them his inbox, which, as a result of his semi-famousness, was overflowing with emails from all over the planet. He told them he wanted to travel around the world one more time and invite the people who’d written him to come out and dance too.”

Over the course of 14 months, Harding traveled to 42 countries and, simply, filmed himself dancing with folks. Now he has a publicist to help him field interview requests. And to think it all started in Hanoi, when a friend suggested, “go do that stupid dance you do and I’ll film it.”

He just kept dancing
“It started off as a goof; and then I just kept doing that on the trip I was on,” said Harding.

“I started collecting [videos of himself dancing] as mementos. There was no higher thought to it than the person who brings a T-shirt or a stuffed animal and takes pictures of themselves everywhere they go. It just happened to be that dancing has more of a profound meaning to people.

“[On] the first videos I danced alone, but when I went to Rwanda it was by far and away my favorite clip of that [previous] video. It was so much more fun to dance with other people.

“I’m not much of an extrovert, so it would have been hard to go up to people and say, `Will you dance with me?’ So the second video created an opportunity to find people. My girlfriend (Melissa Nixon) produced it for me, and everywhere we went, we organized these big events where we’d dance.”

And what exactly does he call that step he’s doing?

‘The human metronome’
“I call myself the human metronome, because once the people start running in, I’m just this thing keeping the time in the background,” he said. “When you watch it, your eye shifts to all these different people doing these crazy things. I’ve found that everybody sort of gravitates to the same things, from clip to clip. You see the guy in Stockholm on the far right, you see the girl in Poland with her hand on her skirt — all these little nuances that are fun.”

When it came to the accompanying music, Harding and Schyman knew they didn’t want to weigh down the footage with cheesy lyrics or over-the-top sentimentality.

“We were talking to a very popular musician who was interested in singing on it, but it didn’t come together and we ended up kind of stuck,” said Harding. “We were really struggling with lyrics: How do you write lyrics for a video like that without it being clichéd? And I said to Gary, `What if we did it in a foreign language?’

“And he brought up this poet, Rabindranath Tagore, an Indian poet who won the Nobel Prize, and I went looking through his poetry and found this “Stream of Life’ poem that talks about life and being and dance, and I thought, `This is perfect.’ So we had the lyrics, but we didn’t have someone who could sing it in native Bengali.”

Looking for a singer
Enter Harding’s girlfriend, Nixon, a recruiter for Google who set out to find a singer. In short order she stumbled upon Siddique, whose father is a brigadier general in the Bangladesh army, and whose family settled in Northeast Minneapolis when Palbasha Siddique was awarded a scholarship to MacPhail Center for the Arts. A singer her entire life (she recorded her first CD when she was 7 and sang “God Bless America” before a Twins game when she was 11), Siddique studied at De La Salle High School and transferred to Southwest last year when she was accepted into the International Baccalaureate program.

At the moment, she is one of the most heard singers in the world. She is forming a band and releasing a new CD next week. She intends to study at Harvard Law. She is, in other words, on fire.

“I’m not on fire yet,” she laughed. “I want the whole world to know me one day. It’s just not there yet, but it’ll get there.”

“With God’s help,” said her mother, in the background.

As it turns out, God must work for KFAI-FM, the Minneapolis-based community radio station where Harding and Nixon first heard Siddique’s archived voice, which suggests the Bangladesh-Minneapolis soul sister of Pakistani mystic/singer Sheila Chandra.

Interviewed about war in Bangladesh
“I was being interviewed on a show about the war in Bangladesh, which my father is fighting in,” says Siddique. “For some reason, the woman asked me to sing four lines from a song, and so I did, with no background music or anything. The video quality of it was so bad I asked the [program engineer] not to upload it. But he did, and it’s good after all, because that’s how Matt found me.”

Harding flew Siddique and her mother to Los Angeles to record the track, and paid her $1,000.

“The recording could have gone disastrously,” said Harding. “She’s 17 years old, but she absolutely had the chops and she had this incredibly powerful voice and was able to give us this amazing performance.

“We were working with L.A. engineers and musicians who were just going, `How did you just find this girl?’ It was all just very serendipitous, and when you’ve got that serendipity going, you just get out of the way and let it happen.”

Which could be said about the “Dancing” video as a whole. Harding is reluctant to put into words what the video’s “message” is, other than “it’s just people dancing … so it’s very simple, and very complex.”

Not to mention unprecedented.

“It’s true,” he said. “This is something that hasn’t been possible until very recently: The ability to travel all around the world like this, and get to all these places, and have access to these people, and to do it with a high-definition camera that weighs less than a pound and get it out to the entire planet, is all very new.”

Jim Walsh writes about music and local culture for MinnPost.com. He is a former City Pages music editor, an award-winning columnist for the Pioneer Press and the author of the recently released oral history “The Replacements: All Over but the Shouting.

UPDATE 7/25/08: Dancing Matt’s singer Palbasha Siddique stars in a video of her own

Here is a translation of the poem “Stream of Life,” by Rabindranath Tagore, which Siddique adapted for “Dancing”:

Stream of Life
by Rabindranath Tagore

The same stream of life that runs through my veins night and day
runs through the world and dances in rhythmic measures.

It is the same life that shoots in joy through the dust of the earth
in numberless blades of grass
and breaks into tumultuous waves of leaves and flowers.

It is the same life that is rocked in the ocean-cradle of birth
and of death, in ebb and in flow.

I feel my limbs are made glorious by the touch of this world of life.
And my pride is from the life-throb of ages dancing in my blood this moment.

Dancing with the universe