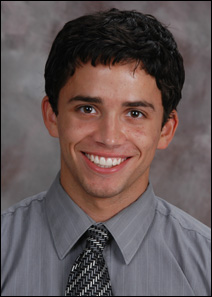 PHILADELPHIA, PA. —  It was so close.

There were so many moving, soaring and twisting parts that the selection committee went into overtime. The wait was …

“It wasn’t comfortable, that’s for sure,” Guillermo Alvarez said Sunday night, on the outside looking in.

Alvarez, the former Gophers All-American and member of the U.S. World Championship team, entered the U.S. Olympic gymnastics trials on the bubble. He knew it. And needed a perfect meet to get one of the six spots — or three alternate slots.

In the end, after the U.S. nationals in April and the trials this past weekend, he posted the sixth best all-around scores of any man in the nation. He was third in pommel horse — a weak spot on the U.S. team — and fifth in floor exercise. He was dependable.

But it wasn’t enough.

“I’m sure everybody who was in the mix got a fair shake, whether I agree with it or not,” said University of Minnesota coach Mike Burns. “It’s disappointing to get this far and come up short.”

It’s not like Alvarez was shocked by the decisions of the five-man selection committee, which used scores from the nationals and trials and ran countless computer models to determine which gymnasts could produce the best scores for the U.S. team in Beijing.

Indeed, Saturday night, after he stepped out of bounds on his floor exercise and stalled on his pommel horse dismount, Alvarez said: “I feel like I could have done better.”

As for preparing for the Olympic decision, he said Saturday night as the selectors got ready to meet: “I’m hoping for the best and bracing for the worst.”

Coach praises his consistency
Burns noted that Alvarez was the only athlete on the floor who had gone through 24 high-pressure routines in the U.S. championships and then the trials without one fall.

“He’s the most consistent guy on the national team,” Burns said.

I asked the coach if — like in figure skating — he planned to lobby members of the selection committee for Alvarez.  Burns looked astonished as he chuckled.

“They get sequestered,” he said of the five-man panel. “It’s like voting for the pope.”

Come to think of it, some of those gymnasts did genuflect out there on the mat. With a double twist thrown in for good measure.

Then came Sunday. At about 1:30 p.m., Alvarez gathered with 13 other men to hear who was picked for the Olympic team. What a select and nervous group. And when they all convened in that cluttered room, they heard this from USA Gymnastics men’s program director Dennis McIntyre: The committee needed more time.

The uncomfortable wait followed for Alvarez. His name wasn’t called.

And then the disappointment.