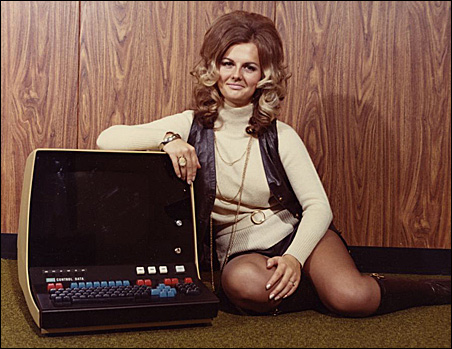 Walk the halls of the computer science buildings on college campuses across the United States and you’ll notice a peculiar thing: there are very few women. At a time when women are swelling enrollments in many other university departments, computer science is conspicuous for its lack of female students.

Worse, percentages of female bachelor degrees earned in computer science are falling-down to 25 percent in 2004, the latest available figures, from a high of 37 percent in 1984. And all this is occurring at a time when National Science Foundation (NSF) funding to encourage women in the computer sciences — about $20 million annually — has never been higher.

Only computer science shows a decline-and a steep one at that. What’s behind this mystery in a field fundamental to advances in science, technology and medicine?

Cracking the case of women gone missing
An international group of computer science educators and historians convened in late May in Minneapolis to systematically try to answer the question. Sponsored by the Charles Babbage Institute, a research center for the history of information technology, the conference “History, Gender and Computing” looked to the historical record for insight.

“We think there’s a crucial ‘missing piece’ when lots of smart people, backed by handsome NSF funding, are conducting savvy projects to increase women’s participation in computing — but then the numbers go in the wrong direction,” said Thomas Misa,  historian of technology who directs the Babbage Institute.

“From the peak of nearly two women for every five computer-science graduates in the mid-1980s, it’s slid — just like water draining out of a tub, across two decades — to the most recent number of around one woman in five. Both the accelerated rise of women into computing in the 1970s, and the disastrous drop since the mid-1980s call out for historical investigation,” Misa said. “Our hunch is that young people need better, more positive images of computing — doing real things in the world, not just solving logic problems. Also, we are very concerned that if these  measurable drops are occurring for women, it’s possible that other, less visible groups are not entering the field either.”

Hara Konsta, a Ph.D. student from the University of Athens, Greece, talked about the not-so-subtle images of women as lesser workers in advertisements used to promote computers in the workplace. She presented a visual record that typically placed women in passive positions, seated and doing clerical work with mice and keyboards. By contrast, men assumed iconic positions of dominance, standing above the seated women, pointing in instructional, supervisory gestures.

In another visual division of labor, Konsta offered evidence of women typically shown doing the manual labor of printing while men do the actual creation. Computer printers and women seem to have a curious connection. Printers are advertised with photographs of attractive and scantily clad women, some even being printed out in beautiful colors from the printers. Konsta suggested a social reason rooted in power relationships behind this visual conceit: it serves to keep women at the periphery of the computing industry by limiting them to peripheral devices. The heart and power of the computer — the CPU or the hard drive — is usually portrayed as the male domain.

“[The] gendered introductions of computing in popular and technical publications and the development of computing as a gendered technology have fed back on each other,” explained Konsta. “There is a crucial interaction between the growth of computing and the increased sophistication of…gendered computing advertisements.”

Hilde Corneliussen, an expert in humanistic informatics at the University of Bergen in Norway, also examined disparate cultural messages in computing: one communicates competence with computers to men, and the other communicates incompetence with computers to women. In the cultural discourse surrounding computer science, Corneliussen noted a curious pattern of visibility and invisibility.

Clues to investigate
In addition to mass media visual images that communicate a male role for computer science fluency, other leads surfaced at the conference that might explain why the percentage of women with computer science bachelors’ degrees dropped precipitously after 1984. They include:

• Emergence of the male nerd-hacker stereotype in mass media. The popular stereotype of the male nerd/hacker computer scientist emerged in the 1970s and was the centerpiece of “Revenge of the Nerds,” the comedy film released in 1984 — the very time when women’s enrollment in computer sciences bachelor’s degree peaked. Prior to this time, computer science and programming were relatively new professions. “Given the lack of widespread and established stereotypes in the early days, a woman contemplating a BS may have seen few reasons not to be a computer scientist,” explained the University of Minnesota mechanical engineering professor Caroline Hayes. In fact, during the late ’70s and early ’80s, the representation of women grew faster in computer science degrees than in nearly any other discipline.

• Rise of personal computers in homes. The colonization of personal space by personal computers occurred in the early 1980s. The explosion of PC use resulted in larger numbers of students arriving at college with programming experience — and some college programs adding entry requirements of programming experience. Data show that college-age men tend to have more prior programming experience than do women. This may fuel sociological developments, such as the creation of a male-dominated “computer clubhouse.” Girls may not feel welcome or encouraged in programming classes; or feel comfortable in the informal hang-out groups common to computer labs at universities. A male-orientation toward the computer may be established early in the home when male siblings “hog” the computer.

Growing pains
Hayes noted that there has been an explosion in employment opportunities for computer science graduates over the past 35 years, so it isn’t opportunity that is keeping women out of the field.

“In 1974 it [computer science] was an esoteric field graduating less than 5,000 Bachelors of Science. Thirty-plus years later it has become a popular profession having international economic importance, graduating almost 60,000 bachelors in 2004,” Hayes said. “However, computer science has experienced growing pains, particularly with respect to the representation of women.”

As participants in a global culture of science, we need to better understand women’s declining participation in computer science, and work to reverse the trend, Hayes and Misa said, because  women are missing a significant opportunity to make creative contributions to society. “Mastering computer science is good for women, good for culture, good for science, good for families,” Hayes concluded.

Anne Brataas, a former reporter for the Star Tribune and Pioneer Press, is president of The Story Laboratory, a St. Paul group that specializes in the coverage of science. She wrote this article for the Inside Science News Service, which is supported by the American Institute of Physics, a not-for-profit publisher of scientific journals.

U.S. Army Photo
Gloria Ruth Gorden, left, and Ester Gerston wiring the right side of the ENIAC (Electronic Numerical Integrator And Computer), circa 1946.

The low participation of women in computer science cannot be explained by their “delayed” introduction to computers, as a popular assumption sometimes asserts.

Consider this: The first computers were people, not machines — and they were women.  Hundreds of women “computers” manually computed figures for artillery firing tables during World War II. Six women were specifically chosen to program solutions on the ENIAC (Electronic Numerical Integrator And Computer), built at the University of Pennsylvania, and launched in 1946.

Men built the hardware of ENIAC, and the women — whom today would be called  programmers — wired by hand the different electronic components of the room-sized machine that were needed to solve differential equations that calculated shell trajectories. Without the women physically connecting the computational elements, ENIAC was limited to doing addition blazingly fast, multiplication and division a bit slower, and a slow extraction of square roots.

Said the University of Minnesota’s Thomas Misa, a historian of computer technology who heads the Charles Babbage Institute: “We might think of computing as being masculine, or male, but in the 1940s and 50s — whatever our stereotype — there were surprisingly large numbers of women who played key roles in computing.”

The women who manipulated ENIAC’s cables and patch cords, such as Kay McNulty, Betty Snyder, Betty Jean Jennings and Fran Bilas, were for many decades absent from popular discussions of computer history. “Until about 15 years ago, these early pioneers in computing were almost invisible,” Misa said. “But now, we can recognize both the hardware achievement of the men who built ENIAC, and the programming achievements of these women.”

Yet these extraordinary women were misrepresented. While their male colleagues became famous names in the computing world, the women were given short shrift and collectively referred to as “the ENIAC girls.” Their role was seen as so secondary that media at the time neglected to mention them in stories about the computer. — Anne Brataas

This doesn’t compute: As more women enter scientific fields, their numbers in computer science are declining