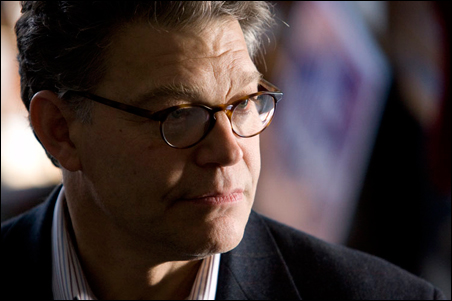 Al Franken’s bandwagon is veering out of control as it approaches Rochester and the DFL state convention.

Franken, who only a few days ago seemed like a shoo-in to receive first or second ballot endorsement as the DFL’s candidate for the U.S. Senate, suddenly  faces all sorts of problems. He’s got to deal with the echoes of his own words,  Jack Nelson-Pallmeyer and the likelihood that even if he wins the endorsement, he’ll likely have to face a primary foe in September to determine who will be the DFL’s candidate to face incumbent Norm Coleman.

Mike Ciresi, who dropped out of the race in March when he found himself trailing both Franken and Nelson-Pallmeyer, indicated in an interview with MinnPost Thursday that he’ll likely mount a primary challenge.

Though Ciresi previously had said he’d honor the endorsement process, he said Thursday everything has changed because of the controversies surrounding things Franken had written and said years ago as a “Saturday Night Live” performer and as a “satirist” writing for such publications as Playboy.

“All options are open,” said Ciresi, who said he might even show up in Rochester for the convention, which began today but gets heated Saturday when delegates begin the endorsement process.

“It is my belief that we have to get this race back to the issues,” Ciresi continued. “It is important that Minnesota send a Democrat to Washington, but instead of talking about issues, instead of spending our energy on defeating Norm Coleman, we’re in this morass.”

Andy Barr,  Franken’s communications director, responded  by saying “we continue to take Ciresi at his word that he will respect his commitment to honor endorsement.”

Possible outcomes
There are all sorts of rumors floating around that other DFLers also are ready to leap into a primary if Franken continues to stumble.

The name of Minneapolis Mayor R.T. Rybak, a Franken supporter, keeps coming up as a possible replacement for Franken. Rybak, who is expected to be in Rochester, keeps denying he’s interested. State Sen. Tarryl Clark’s name also is floating in the DFL air. She’s been unavailable for comment.

1. Franken  wins endorsement, though even his campaign is suggesting that it may take four or more ballots for him to gain the 60 per cent of the vote needed.

2. The convention is either unwilling or unable to endorse either Franken or Nelson-Pallmeyer. It is believed that some of Ciresi’s old allies will push for the no-endorsement option on the convention floor.

3. Nelson-Pallmeyer could win endorsement, an outcome which seems to be considered least likely to happen by most DFL insiders.

It should be noted that the St. Thomas professor was in a buoyant mood Thursday.

Nelson-Pallmeyer is many things. But a kidder he is not.

Even before the “issues” of Franken’s un-Senatorial words, Nelson-Pallmeyer said he was making progress with the delegates.

Republican women and McCollum
The twist to this DFL messy convention story is that it all was created by the state’s Republican Party. For months, the Republicans have been digging up stuff on Franken, starting with his workers comp and tax problems. The amount of time and money Republicans have invested in undermining Franken indicate they must believe he’s Coleman’s strongest potential opponent.

But it wasn’t until late last month that the Republicans hit with the material that’s causing Franken the most headaches. They found a “satire” he’d written for Playboy magazine in 2000. At best it was boy’s locker room stuff; at worst pornographic.

Republican women announced they were horrified.

To make matters far worse, U.S. Rep. Betty McCollum, D-Minn., said she too was disgusted by what she’d read. She also said that the DFL needs somebody stronger than Franken at the top of its ticket.

The voices have begun to echo McCollum. Sen. Amy Klobuchar has said Franken needs to apologize for some of the writings. Planned Parenthood’s Connie Perpich sent out an e-mail saying that it could be difficult for the organization’s political arm to endorse Franken.

Franken, clearly on the defensive, released a statement Thursday night “I understand and regret that people have been legitimately offended by some of the things I’ve written.”

He went on to say he would fight hard for women’s issues in the Senate which is “something Norm Coleman hasn’t done for the last six years.”

McCollum is scheduled to speak to the convention Saturday morning.

But presumably a lot of other people are nervous about McCollum, too, starting with Franken because on Thursday, the Republicans held another news conference featuring “horrified” Republican elected officials.

This time their contempt stemmed from a 1995 New York magazine article, that was highly critical of the direction the television program “Saturday Night Live” had taken. In the article there was an anecdote, apparently taken from a brainstorming session among participants of the show, including Franken. The article says that Franken proposed a skit involving the drugging and raping of a nationally prominent female newscaster.  The proposed skit didn’t make the air.

But it was good for more mileage by Republicans.

“To the thousands of women in this nation who are raped and sexually assaulted, the prospect that a man who made his living joking about these things would be a United States senator must be horrifying,” said state Rep. Laura Brod at Thursday’s news conference.

Mark Drake, communications director for the Republican Party, said in a recent conversation that his party isn’t running out of material any time soon.

‘I think he’ll win’
All of this has weakened Franken. But it’s still expected he’ll eventually get endorsement sometime this weekend.

“I think he’ll win,” said Rick Stafford, a delegate who was a former state party chairman. “This isn’t like conventions where there is a big swing of uncommitted delegates. Very few of the delegates are undecided.”

Stafford agrees that Franken isn’t as strong now as he was a few weeks ago.

“I think some people are turned off,” said Stafford. “And he loses some of the character argument that he could have used against Coleman. But by November, I think Minnesotans will be far more concerned about $4 or $5 a gallon gasoline than something Al wrote eight years ago.”

And there’s another reason Stafford thinks the delegates will stick with Franken. It’s because Franken has stuck with them for more than two years. Long before he was a candidate, Franken was showing up at bean feeds across Minnesota and helping DFLers campaign in legislative races.

A story to illustrate that point.

In January, there was a special election in Northfield, Minn., called to fill a state Senate seat which traditionally had been owned by Republicans.

“He helped me every way possible,” said Kevin Dahle of Franken. “He’d have an event where there’d be a lot of people and he’d turn the stage over to me for a few minutes. He’d go door knocking with me.

“He came with me on Jan. 2,” Dahle continued. “It was zero degrees. He didn’t have to be there. But he was the most dogged door knocker I’ve ever seen.  We’d come to a door, he’d knock and you could see people were going to wave us off. ‘Get out of here!’ He’d knock again. Then, they’d see it was Al. They’d open the door.  ‘Come on in, Al.’ He was a huge help.”

Dahle won the seat. And Saturday he’ll be speaking on behalf of Franken to a room filled with people who’ve had similar experiences.

“A lot of us aren’t wavering,” said Dahle.

Franken’s campaign veering out of control, rumors fly and Ciresi considers jumping back in the race