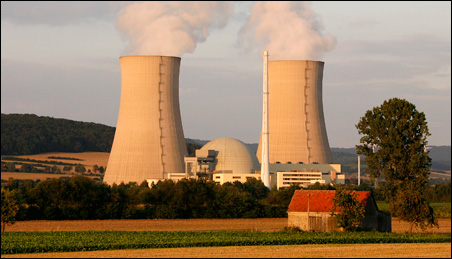 REUTERS/Morris MacMatzen
Will rural Minnesota someday be dotted with nuclear power plants, like this one near the small town of Grohnde, Germany?

Legislative hearings will be held in early 2009 on whether to lift Minnesota’s 16-year ban on building new nuclear power plants, a move spurred by policies to reduce carbon emissions linked to global warming.

Ironically, advocates of carbon-reduction policies are among the harshest critics of nuclear power, and efforts to remove the ban would surely rekindle sharp debate over the safety of producing electricity from plants that send no smoke from their stacks, but have no place to send their radioactive wastes.

“We’re entering an era of nuclear relapse,” said George Crocker of Lake Elmo, Minn. Crocker, who has opposed nuclear-power development since the 1970s, said he’d welcome hearings so that the multiple concerns over nuclear power could be repeated.

And a leading legislative authority on energy matters, Rep. Bill Hilty, DFL-Finlayson, said hearings on lifting the ban could stimulate broader discussions on the sustainability of energy growth rates.

Looking for a sustainable model
“We need to think about our power needs in terms of finding an economic and social model that’s sustainable,” Hilty said. “Meantime, the issue of nuclear power isn’t going to go away.”

MCCAG has made sweeping recommendations on ways that the state can aggressively reduce carbon emissions as mandated in the 2007 Next Generation Energy Act. Embedded in the group’s final report is a recommendation “that the state commission a study on the costs and risks of installing a nuclear power station in Minnesota in the post-2025 period.”

However, acting in January on preliminary MCCAG recommendations, the Pawlenty administration went beyond its own advisory group and told legislators that the nuclear power ban should be erased. The policy is consistent with one supported nationally by Republican presidential candidate Sen. John McCain of Arizona; Pawlenty is one of McCain’s national co-chairs.

Some Gore, Franken interest
Al Gore, who won a Nobel Prize for his film about global warming, “An Inconvenient Truth,” has suggested that nuclear power should be considered as an alternative to coal-fired power plants. DFL Senate candidate Al Franken has also indicated an interest in nuclear power.

“It makes sense to talk about this, and the (Electric Energy) task force is a good place to start,” said Sen. Steve Dille, R-Dassel, co-author with Sen. Steve Murphy, DFL-Red Wing, of legislation to lift the nuclear ban.

Coincidentally, the 20-member legislative task force was created as one result of impassioned debate in the early ’90s over whether to allow added storage of spent — though still highly radioactive — fuel rods at Xcel Energy’s 1,000-megawatt Prairie Island nuclear power plant near Red Wing. Xcel also operates the 600-megawatt Monticello nuclear plant, and together the plants produce nearly a quarter of the state’s electricity.

Bill to lift ban would get hearings
Hilty has told House authors of a measure to lift the nuclear ban, DFL Reps. Tom Huntley of Duluth of Tim Mahoney of St. Paul, that he would hear their bill. Prettner Solon said her committee would honor a request to hear the bill, which Dille said will be made.

Revived interest in nuclear power has been seen in Minnesota and elsewhere as policies advance to reduce emissions of carbon, which is linked to global warming. Most of Minnesota’s electricity comes from coal-fired plants, which — along with cars and other vehicles — emit the preponderance of carbon linked to climate change.

Dille said that the carbon-reduction policies have “given legs” to nuclear-power proponents. While nuclear plants have attracted concerns for other reasons, they do not emit carbon.

Already, two events in Minnesota have been directed at carbon-spewing coal plants. One was an order by the Pollution Control Agency for a full environmental review of a proposed ethanol plant near Erskine, Minn., in part because the energy source would be coal. And last week the Public Utilities Commission delayed a decision on granting a certificate of need for transmission lines into Minnesota from the Big Stone II power plant at Millbank, S.D., in key part because the 500-megawatt plant would burn coal.

The two actions, while not finally decided, have signaled that the state is serious about moving ahead to limit carbon emissions.

Regional ‘cap and trade’ explored
In a related action, Republican Pawlenty and Wisconsin Gov. Jim Doyle, a Democrat, are heading an effort to create a regional “cap and trade” program to set limits on carbon emissions. An initial report on how a program may be structured is due in September.

A similar effort to establish a national carbon-reduction effort advanced to the floor of the U.S. Senate last week, but was derailed by a Republican-led filibuster. It’s expected to be revived next year.

Another nuclear-power advocate in the Minnesota Legislature, Sen. Jim Carlson, of Eagan, said that while radioactive-waste storage issues are a concern, “nuclear power will be on of the safest systems that we’ll have in the next 100 years or more.”

“No one has ever died from nuclear power in this country,” Rep. Mahoney said, adding that in the time he’s worked in both Prairie Island and Monticello nuclear plants he’s accumulated less radioactivity “than one gets from an X-ray or a suntan.” Mahoney acknowledged that hearings on lifting the nuclear ban would “open a can of worms,” but added that the energy source should be in the mix of alternatives to burning coal for electrical production.

Capacity issues with wind energy
One of the most frequently discussed alternatives is wind energy, and giant windmills continue to spring up along a broad expanse of Buffalo Ridge in southwestern Minnesota to meet a state mandate that a quarter of the state’s electricity be generated from renewable sources like wind by 2025.

“There isn’t enough capacity from wind,” Mahoney said. “And if people want to use their flat-screen TVs and big computers, where do they think the power will come from?”

At least four states — Wisconsin, Illinois, California, and Kentucky — are considering lifting their bans on nuclear power. Several southern U.S. states are moving ahead with plans to build nuclear plants, which currently produce a fifth of the nation’s electricity.

In pointing to the need to consider nuclear power, Huntley referenced an article in Foreign Affairs that said worldwide energy demand will double in 50 years, even with “vigorous conservation.”

Resource declines will raise costs, limit growth
But that, Hilty said, is not realistic. Dramatic decreases in energy resources, like that being experienced with oil, will limit growth simply because of equally dramatic cost increases.

He believes that major — and potentially catastrophic, if not managed — energy adjustments will become a social and economic imperative.

That’s why Hilty successfully pushed this year for the creation of a legislative energy commission that will replace the Electric Energy Task Force in January.

Hilty said that a scarcity of uranium — the primary fuel of nuclear power plants — already is driving up prices to the extent that building a plant is becoming prohibitively expensive.

Crocker said the timeline to build a nuclear power plant is at least 12 years and that, together with increased costs, has meant that investors won’t put their money into nukes.

Indeed, none of the advocates of lifting Minnesota’s nuclear power ban is aware that the state’s largest utility, Xcel Energy, or any others are even thinking about building a nuclear plant.

In the early ’90s, safety was a major complaint against nuclear power. While the issue remains, there are indications that the concern has subsided.

Nearly four decades and no depository
When the Prairie Island plant was built in the 1970s, the Northern States Power Co. (since purchased by Xcel) assured state regulators that a federal depository for spent and radioactive fuel rods would be built. However, multiple federal attempts over nearly four decades to locate a site for such a depository have centered on burying waste under Nevada’s Yucca Mountain. But the effort has become seared in a political maelstrom with Senate Majority Leader Harry Reid, a Democrat, leading the fight against it.

And while the U.S. Department of Energy has submitted an application to the Nuclear Regulatory Commission to develop the depository at Yucca Mountain, many critics say it will never be built. The site has been under review for 30 years.

All of which means that radioactive wastes must be stored at the site of nuclear plants, and places like Prairie Island and Monticello have run out of room. The last attempt to expand waste storage at Prairie Island met with furious opposition.

Sen. Carlson said he toured the site recently and is satisfied that new methods of waste storage are exceptionally safe.