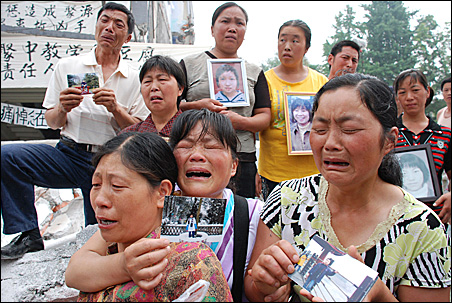 REUTERS
Weeping parents hold portraits of their children during a May 27 memorial service at the ruins of Juyuan Middle School.

The photos of protesting Chinese mothers holding pictures of children who were crushed in the collapse of their school in the May 12 earthquake are at once haunting and politically powerful.

Edward Wong of The New York Times, which ran a widely used Associated Press photo of police officers trying to remove grieving parents, reported that “the police dragged away several crying mothers and removed some journalists trying to report on the event, according to witnesses and photographs of the protest. The attempt to snuff out the protest was the strongest sign so far of the government’s growing impatience with public airing of grievances over unsafe school construction. A standoff between the parents, many carrying framed photos of their dead children, and the police officers, dressed in black uniforms, lasted for several hours. In the end, the parents walked away. …”

Wong wrote that the protest over school collapses “has emerged as the greatest challenge to government officials here in Sichuan, and the grieving parents have become a potent symbol to many Chinese of people victimized by corruption. In some instances, local officials have begged parents to quiet down and accept financial compensation for the loss of their children. But the recent spate of government intimidation and censorship shows that the civic empowerment that has flourished in the aftermath of the earthquake could quickly unravel.”

The protests in Dujiangyan, where nearly 900 students died in a middle school, come after China was widely credited with a new openness and transparency in the aftermath of the devastating quake, which has killed more than 69,000 people, injured thousands more and left millions homeless.

Cara Anna of the Associated Press explained it this way:

“The police action was the clearest signal yet that authorities are hardening their stance against the impromptu displays of public anger over the May 12 earthquake that collapsed schools and killed thousands of children. The students’ deaths have become the focus for Chinese, both inside and outside the quake zone, fueling accusations about corruption in school construction. The brewing public anger has become a political challenge and threatens to turn popular sentiment against the authoritarian government as it copes with aiding millions displaced by the disaster.”

Anna reported that the government “had been generally praised for its response to the earthquake, including the freedoms allowed both to foreign and domestic media. In Beijing, Foreign Ministry spokesman Qin Gang said the ‘principle of transparency and openness remains unchanged.’ However, he also said local authorities were making decisions based on the conditions in the disaster zone, although ‘they are not trying to block any news or make difficulties for the reporters.’ “

The protests have not been lost on the government. According to Chinese news agency Xinhua, China’s State Council (or cabinet) passed “a draft regulation on post-quake restoration and reconstruction” that “put forward special requirements on earthquake-resistance levels of infrastructure construction in the quake-hit regions, including schools and hospitals.”

The seeds of the parents’ protests over school collapses were apparent in the immediate aftermath of the quake.

“But if grief is the dominant emotion in Wufu, then anger runs it a close second. As you walk through this rural community, it is impossible not to be struck by the profusion of home-made banners strung across streets and hanging from walls. They point to a story of corruption and incompetence that the bereaved believe did more to kill their children than any natural disaster. One reads: ‘Our children are not dead directly due to the earthquake, but because of a tofu building.’

“The Fuxin 2 school was reduced to rubble in minutes, burying the children, while the buildings around it stood firm. It is that telling fact which so enrages the parents of the dead and has driven these formerly quiet citizens to protest at the remains of the school, every day. Multiply that anger by 6,898 — the total number of school buildings that collapsed across the earthquake zone on May 12 — and it is possible to get the measure of the new phenomenon facing the Chinese authorities: a fury shared by tens of thousands of bereaved parents, some of whom are now planning larger-scale protests.”

And now comes word that scientists had been warning about earthquake dangers and ineffective building codes.

The Times’ Howard French reported Thursday that “Chinese scientists say that even before a final accounting can be made in last month’s earthquake in Sichuan Province, one thing is painfully evident: The huge death toll stems partly from a failure to heed clear warnings of a devastating earthquake in the area. For decades, Chinese scientists say, they have known of the risk of a potentially catastrophic earthquake along the Longmenshan belt, the area where the Wenchuan earthquake struck, and repeatedly raised their concerns with government authorities. But they say preparations for a quake there were cursory at best, and building codes remained well short of the codes that have become standard in other well-known earthquake zones, including Beijing itself.”

Wang Ping, a Macalester College English professor and photographer who travels frequently to her native China, said of the school collapses in an interview: “The construction collapse was the result of all the rushed projects … overdevelopment without considering the long-term safety. I’m hoping they will learn the lesson and investigate and hold those responsible (for the shoddy construction) to account. In the future, I hope they would start thinking that safety is most important. If nobody is punished, people will continue to do the same thing … I’m worried local governments will do everything to keep things quiet. I hope media coverage and the Internet will keep the protest alive and put pressure on local governments.”

The earthquake and the school collapses have had such a devastating impact on the Sichuan Province that local authorities have said that couples who lost a child would be exempt from China’s one-child policy and be allowed to seek permission to have another one. And many couples are seeking to adopt children whose parents were killed by the quake as a way to get around the one-child policy.

Parents of adoptees respond
The pictures and video of the earthquakes devastation have struck a responsive chord with families in the United States and Canada who have adopted children from China. The AP reported:

” ‘There for the grace of God go our daughters, and us,’ said Sandi Janusch, who adopted 7-year-old Kaili from China as a baby. Moved by images of the tragedy and pulled by an invisible red thread that — as Chinese legend holds — forever connects her to her daughter’s birth country, Janusch wanted to do something, anything, to help. So she, Kaili and some friends baked. A lot. Together they raised $2,400 for relief efforts by making and selling gourmet fortune cookies — espresso and jasmine tea were among the specialty flavors sold eight to a decorated box — in Calgary, Canada. Where there are Chinese girls adopted by parents halfway around the world, there are bake sales, garage sales, dance performances, memorial services and cash campaigns raising money for earthquake victims in the country that united their families.”

A number of nonprofits involved with Chinese adopted children have created earthquake relief funds. The AP said that “Half the Sky Foundation, established by adoptive mom Jenny Bowen of Berkeley, Calif., has created an emergency fund to funnel shelter, food, clothing and other necessities to children in the earthquake zone. The organization, which works year-round to provide services, supplies and work crews to Chinese orphanages, has been taking in the proceeds of homegrown relief projects from adoptive parents. Together with larger donations, the foundation’s earthquake fund totals about $600,000, with about half already spent.”

Half the Sky Foundation

A listing of other relief agencies can be found here.