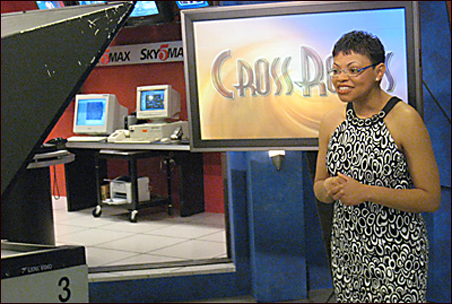 MinnPost photo by Roxane Battle
Sheletta Brundidge on the set of “Crossroads.”

At first glance, you might think you’ve arrived early for a block club meeting, a bible study or a small family gathering. The half-dozen or so chairs arranged in a semicircle and the light chatter in the room are clues something’s about to begin.

And it is — only it’s a meeting in the KSTP-TV studio in Saint Paul.

Just behind three very large floor cameras, guests are waiting for their appearance on the public affairs program “Crossroads,” which airs Sunday mornings at 7:30 on KSTP’s sister station KSTC Channel 45.

Since becoming the show’s host a year ago, Sheletta Brundidge, 36, has interviewed her fair share of big names. Recording artist Mary J. Blige and “The View’s” Joy Behar appeared via satellite. Motown legend Smokey Robinson and former syndicated talk show host Montel Williams stopped by the studio. The Minnesota Lynx players make regular appearances. As do a smattering of local officials and politicians. And then there are a bunch of ordinary, everyday folk like you and me. (Disclosure: I was on the show last March.)

“This is a grassroots show for people who don’t get the opportunity to be on TV,” says Brundidge.

“This is what I’ve always dreamed of — not just a television show, but something that has to do with communities of color because I feel so comfortable around my own people,” says Brundidge, whose short pixie haircut and perfectly arched eyebrows frame a constant high-wattage grin. “This show really tries to shine a spotlight on the positive things that are happening in our community, and there aren’t any other shows that are doing that in this market.”

She wouldn’t have it any other way.

“It’s like a family. We don’t shake hands. We hug and I tell people be casual because this is family and they can talk openly. It’s like sitting down in the living room with your cousin.”

The show is taped on Saturday mornings without a lot of the perks and frills often associated with television production. Brundidge does her own makeup. But she does have a wardrobe consultant: her husband.

“He picks out all the clothes. I’m like a tomboy. Outside the show I’ve got like a baseball cap on and a sweatshirt. My pants don’t match but he is really into fashion, so he picks out the clothes the night before. Matches the shoes and matches the earrings, ‘cuz otherwise I would be so raggedy.”

A native of Houston, Texas, Brundidge describes herself as a little country.

I would describe her as a plate of warm fried-green tomatoes — tart and sweet at the same time.

Once the cameras are on, Brundidge morphs into a polished professional who doesn’t use a teleprompter, but instead ad-libs her on-camera introductions, nailing them in one take. She poses questions off the top of her head to her guests. Nothing is scripted.

“My husband is a spreadsheet guy and number-cruncher. He keeps telling me to write down my questions and I keep telling him I can’t do that. So he forces me to do the research ahead of time so I kind of have it in the back of my mind.”

Brundidge’s husband Shawn, who works full time as a health care administrator, also helps her book guests for the show.

“We like read all the papers, La Prensa, the Hmong Times, Insight News, The Spokesman-Recorder, and he does a lot of community work. I do stuff in the community too. (Brundidge also writes a weekly column in the Spokesman-Recorder.) “We just keep our ear to the ground and any time we hear about something or know about something we call the people and invite them to come on the show,” she says.

The day I stopped by the studio, an executive women’s networking group, members of the Hispanic Chamber of Commerce, representatives from an African health and wellness program, and students from Dunwoody Academy High School were all scheduled to appear.

Need for focus
The show has been on the air at KSTP for decades. It was first called “The NAACP Forum,” with local members of the NAACP and the Urban League volunteering to host the show.

“It was sort of a revolving door of hosts,” says Mike Smith, KSTP and KSTC program director. “It had kind of lost its focus.”

Brundidge, a KSTP employee at the time, approached Smith a year ago about taking over the show. They changed the show’s name to “Crossroads” after a community affairs show Brundidge watched as a child.

Her impact was immediate.

“She really brought the dedicated focus that the show needed,” said Smith. “She did such a great job with it that we gave her a better time period, from 5:30 in the morning to 7:30.”

But just like her predecessors, Brundidge hosted the show for free, while also working part time as an assignment editor in the KSTP newsroom, a position she recently left because she wanted to focus on the show and spend more time with her 2-year-old son.

Conflict of interest?
With no money in the station’s budget for a host position, Brundidge worked out a deal with the station’s sales department to earn commission from selling ads.

A TV host who also sells air time?! Not something you run across every day.

“In my 30 years in television, we’ve never done anything like this before,” says Smith. “She still wanted to have some sort of income, which makes sense, and this was the best way we could work it out.”

I checked with the other three major television stations in town and confirmed what I suspected: Brundidge is the only on-air host who works double-duty selling advertising. And since she also books the show’s guests, one journalist to another, you gotta wonder, given her background in news, if there’s something a little, uh, funny about this arrangement, like uh, I don’t know … maybe a conflict of interest?

“If I was still in the newsroom there is no way I could sell ads,” says Brundidge. “But the way the show is structured, we focus on what’s going on positively in the community and the ads are from business owners I know and respect and who have been guests on the show.”

Smith says he doesn’t see a conflict of interest either.

“No, because it really is not news. It’s community; it’s information. It’s really an opportunity to do something different with the show and have it be successful. It may sound unusual, but it’s worked so far,” he says.

In just two months, Brundidge says she has sold five of the show’s eight ad spots.

“What I do is identify minority-owned businesses that want to advertise but don’t have the resources to do it and what we’ve done is we have structured a partnership package so that the ad rates for this show are half of what they would be on other shows,” she says.

Brundidge says it was hard for her to learn how to make and then actually go on sales calls, especially since she has a toddler at home.

So since she couldn’t go to potential clients, she found a way to bring them to her.

“I contacted all the minority businesses that I knew and asked them to come to the TV station. I told them we wanted to treat them to lunch and talk about a partnership opportunity to help them grow their business. The first lunch, 20 business owners showed up. The second lunch, 15 business owners came. And they said to me, ‘Sheletta, this is the first time that we have had an opportunity to actually advertise and be able to afford it.’ “

‘What’s a blog?’
Saleswoman is now just the latest addition to a growing list of her job titles. Brundidge, who earned a degree in radio and television from the University of Houston, moved to St. Paul four years ago after working as a producer and reporter for a community affairs show in Lake Charles, La.

In 2006 she was a finalist on Nick at Nite’s Funniest Mom in America contest and now channels her split-second humor and natural comedic ability into a daily blog.

“Girl,” she tells me, with her trademark Southern drawl surfacing, “at first I didn’t know what a blog was. I thought it was something you eat at Christmastime. I was like, ‘I don’t eat blogs. They too sweet for me.’ “

She obviously figured out the ins and outs of posting a successful web log. It won a regional Emmy last fall.

And she still gets her stand-up comedian fix by doing monthly monologues on Twin Cities Public Television’s weekly political show “Almanac.” Her next appearance on that show is July 11.

But “Crossroads” remains her focus.

The station says Brundidge has generated a greater interest in the show and an ever-so-slight increase in ratings. Not to mention advertising revenue. Program director Mike Smith doesn’t see that changing.

“The success of Crossroads,” says Smith, “is based on her performance as a host and as a saleswoman.”

Brundidge admits, “Having to go out and sell ads in order to be able to eat is a challenge because it’s not something I’ve ever done before.” But she says it’s all part of the goal of “Crossroads” — to foster a sense of community and give a voice to those who might not otherwise be heard.

“We had some women who came in here a few months ago and who had worked together 10 or 15 years ago,” she says. “They reconnected on the show and now they’re working on a book together.”