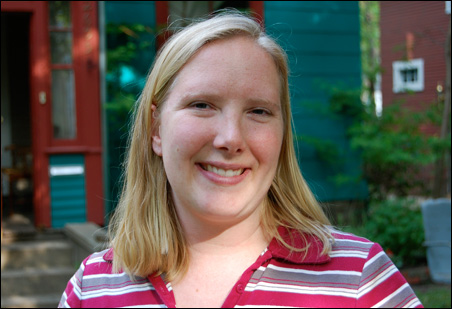 “Here’s the information for the sperm bank. You have 40 minutes to get there.”

Four years later, Anna Getchell of Vadnais Heights remembers what the nurse told her and her husband, Tim “Judge” Getchell, who moments before had been diagnosed with an aggressive, blood-born cancer.

Judge and Anna were married only two weeks before Anna noticed a lump on his side. That was Lump Day. A week later, an oncologist made the diagnosis that Judge had T-cell non-Hodgkin lymphoma, and laid out a plan for immediate treatment — and beyond.

“The doctor walked out, and the nurse walked in with a packet of information and directions to the sperm bank,” Anna recalled.

Ninety percent of men diagnosed with cancer risk losing fertility due to cancer treatments. According to a 2002 report, 60 percent of 201 male cancer patients diagnosed between ages 14 and 40 were warned of the risk of infertility but just 51 percent were given the option to donate their sperm. So more and more doctors are thinking ahead and advising patients, often too preoccupied with thoughts of survival, to donate sperm in the event that one day they may want children. But as the practice becomes more common, numerous ethical and legal issues are surfacing, including questions about the rights of children conceived after their fathers died.

In Anna and Judge’s case, there wasn’t time to digest the bad news and think about children. It was a late Friday afternoon and Cryogenic Laboratories, one of the oldest and largest sperm banks in the nation and headquartered in Roseville, would soon be closing for the weekend. Judge’s chemotherapy, three times the normal amount, started Monday at 6 a.m. They drove fast.

At the sperm bank, the language was hardly romantic for a couple just married. Judge signed an agreement by checking a box and gave Anna legal ownership rights to Judge’s cryopreserved specimen (frozen in liquid nitrate) in the event of his death.

“A month before he died, the doctor told us to prepare for the worst,” Anna said. “That’s when you sit down and say the things you don’t want to say. I’m thankful for that. That’s when I asked him, ‘I want to have your kid if you don’t make it through, are you still OK with that?’ And he’s like, ‘Well, absolutely.'”

And the document Judge signed at the sperm bank has since stood as a legal green light allowing Anna to make him a father, which she is now trying to do three years after his death.

Anna has made three attempts with intrauterine (or artificial) insemination, using one of the vials of sperm Judge bequeathed to her the day he was diagnosed.

“I think he’s definitely here right now,” Anna, 32, said in the waiting room of a Maplewood gynecology office. “He’s probably sitting over there making jokes about us.”

Do-it-yourself sperm kit
Storing sperm has become a growing business. In the past six months, about 1,500 sperm-collecting Live:On kits, filled by Cyrogenic Laboratories with literature and vials, were sent at no charge to oncology clinics nationwide in an aggressive marketing campaign.

Men diagnosed with cancer can now donate specimen at home and overnight mail it to the sperm bank for processing, analyzing and storage up to one year, all for $625.

Competing sperm banks offer financial incentives to attract a rising number of cancer patients who are deciding to store sperm. The national sperm bank California Cryobank gives cancer patients a 75 percent discount; in the past six months, it reported a 31 percent increase of cancer donors.

“Our main target with the kits is if something should happen as far as fertility during radiation,” said Chauntae Ruppe, lab supervisor at Cryogenic Laboratories.

There is a small percentage of widows like Anna, who paid to store her husband’s sperm for three years after his death, now trying to have children. Doctors call it posthumous reproduction, all possible because of new technology.

“I know specifically of two women whose husbands died and have sent for their husbands’ specimens,” Ruppe said. “We just sent them out.”

It’s too soon to know whether there are more posthumous pregnancies due to an increase of men who decide to store their specimen at sperm banks before cancer treatments.

“I think people are much more aware of it,” he said. “In the past, a lot of times we would offer to freeze specimens for potential fertility for military couples who were being separated by deployment. The wife would have access to the sperm if he should become deceased in war. It had to be outlined in the consent form so that counseling persons were aware of his intentions if something happened to him.”

An increasing number of military men are storing their sperm before being deployed to Iraq or Afghanistan. USA Today linked this development to Gulf War veterans who complained of infertility after their tours of duty.

The Roman Catholic Church and Islam oppose the procedure on religious and ethical grounds. And legal issues focus on the father’s consent. Courts in Israel, for example, have ruled that the father’s formal consent is not necessary for posthumous reproduction if it can be shown that the couple had a loving relationship. The courts said that the deceased husband’s specimen belongs to the wife by presumed consent and posthumous reproduction can go ahead if certain conditions are met and there has been sufficient time for grieving.

“People want to do the right thing,” Coddington said. “If the male expressed interest to procreate or have a family, then I think people can see the intention, and each situation would be individualized so it could be used as was their intent.”

The American Society for Reproductive Medicine ethics committee has attempted to deal with the ethical and legal issues of posthumous reproduction. Eleanor Nicoll, the society’s public affairs manager, said: “Consent has to be given before their death. A lot of courts have found that donors must consent to the use of their sperm and that it’s their intention to use their sperm after their death to produce children, not only if they survive.” 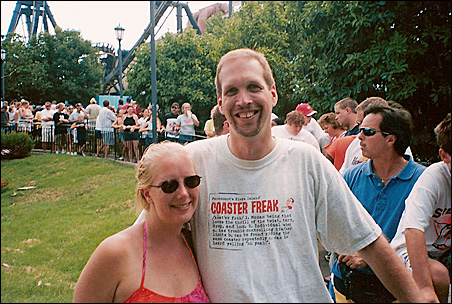 Courtesy of Anna Getchell
Anna and Judge Getchell enjoyed going on roller-coaster rides together. Judge proposed to her on the 100th coaster they rode.

The ethics committee recommends that women seeking posthumous reproduction be screened. The Mayo Clinic, for example, has a general policy that women undergo screening and counseling before assisted reproduction is allowed.

But at some gynecology offices, including Partners Obstetrics & Gynecology in Maplewood, the policies are more discriminatory. Women must undergo a psychological evaluation only if there is an anonymous donor’s sperm being used.

Single women fall into the category of requiring evaluations. So did Anna, who left Partners clinic for another that didn’t mandate psychological evaluations. She changed clinics, she said, because she felt judged by the nurse practitioner.

“[At Partners] I needed to see a psychologist,” Anna said. “I started seeing someone when Judge was sick and so I went to her, and we had talked about it. I think [psychological analysis] is a bunch of bogus. It’s not a spur-of-the-moment decision. It’s something I’ve put a lot of thought into.”

Trying to plan for a new life, Anna put in a call at the Social Security office and told her story. She wanted to know whether her children would be entitled to Social Security survivorship benefits.

“I called the Social Security office before I went through the process, but nobody could give me a straight answer,” she said.

Some states agree that prior consent is needed before the child is legally recognized as the child of the dead father, but states do not always agree on whether that child has a legal right to survivorship benefits or inheritance.

Courts in Arkansas and North Dakota have ruled that posthumous children whose fathers died in those states are not considered children of their biological fathers and do not have survivorship rights to Social Security.

A court in New York ruled differently. “If an individual considers a child to be his or her own, society through its laws should do so as well,” the New York Surrogate Court stated last year.

The issue has not been addressed in Minnesota’s courts or by the Legislature.

Maureen McBrien, a lawyer at Todd & Weld in Boston and an adjunct law professor who teaches a class on assisted reproductive technology at Suffolk University Law School, said that if the question comes before a court in Minnesota, several factors will be considered. “Whether a posthumously conceived child is considered a child of the decedent depends on varying factors like how long after the person’s death the child is conceived, and whether there is evidence that the father intended to be a parent after his death. The court in Minnesota would look at a lot of angles on this,” McBrien said.

She said Anna could apply for Social Security survivorship benefits for her child, and if she’s denied, she could make a strong appeal.

“Potentially a woman could have a child 20 years after the father’s death, and then it doesn’t really make sense for a child to be considered the decedent’s child for benefit purposes. There has to be a line drawn somewhere,” she said.

‘It’s not cheap’
And then there’s the issue of costs. Anna’s insurance plan covers 80 percent of her bills for artificial insemination and the medications she takes to go along with it. For that she considers herself lucky.

This is Anna’s third attempt at artificial insemination. If it fails this time, she’ll be referred to a reproduction specialist and discuss in vitro fertilization.

In vitro fertilization, where the egg is fertilized outside the body, is not covered under her insurance plan and costs up to $10,000 per cycle. Anna can’t afford the procedure.

In Minnesota there are no laws that govern medical coverage of infertility treatments; however, 13 other states have such laws. The most comprehensive laws mandate that health insurance plans cover all treatments, including posthumous reproduction.

“It’s certainly a hot topic,” said Cheryl Peterson, administrator for Partners Obstetrics & Gynecology. “When you talk about infertility, it’s not cheap. When you talk about striving to keep health care costs down — you can’t have the same conversation at once.”

But matters of health insurance and bio-ethics don’t take up much of Anna’s time these days. Instead, she is focused on making mortgage payments and refurbishing the kitchen cabinets in the house she and Judge bought together. She had looked forward to a long life with Judge, a house, and someday having his children. She still hopes for some of that life, including raising Judge’s children.

“He’s the love of my life,” she said. “If I wanted someone else’s children, I’d use a donor. I want Judge’s children.”

Elizabeth Gorman is a freelance journalist from Minneapolis. She reports on international issues and works at Minneapolis Public Schools as a Spanish bilingual educator.

In Judge's honor, Anna has started running marathons to raise money for the Leukemia & Lymphoma Society's Team in Training. On Oct. 19 her team will be running the Nike Women's Marathon in San Francisco. To donate, go here.

From Our Partners:
Novel stem cell therapy gives hope to boy with rare disease U doctors led a team that may have saved toddler Nate Liao
By Laura Stroup and Molly Portz
June 6, 2008

Sisters demonstrate benefits of, and need for, marrow donations
By Roxane Battle
March 16, 2008