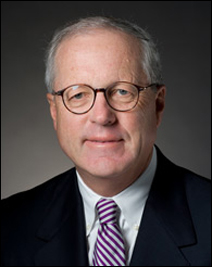 James A. “Jim” Johnson, born in Benson, now lives on the top floor of the Ritz-Carlton Hotel in Washington, D.C., with views of the Potomac and the Washington Monument. But you’ll also find him in the inner circle of many of the nation’s power groups.

In the last year, Johnson, who once was a member of an organization known as Friends of Hillary, has become tightly tied to the presidential campaign of Barack Obama. It’s Johnson’s job to vet potential vice presidential candidates for Obama, a duty he also performed for Walter Mondale, who ended up running with Geraldine Ferraro in 1984, and John Kerry, who ended up with John Edwards, four years ago.

It’s also been reported that insiders from the campaigns of Hillary Rodham Clinton and Obama have met at Johnson’s elegant home to discuss what lies ahead after Clinton finally flies the white flag.

Clinton has denied such meetings took place, and Obama isn’t talking publicly about a search for running mates.

“I’m not commenting on vice presidential matters because I have not won the nomination,” Obama told reporters recently.

Trusted adviser — and the silent type
And Johnson, 64, isn’t the type to comment. An Atlantic magazine article had this to say about Johnson a year ago: “He is famously reluctant to speak to the press, which is one reason why he has become a trusted adviser to so many politicians.”

Efforts to reach Johnson for this article were unsuccessful. The Obama campaign also did not respond to questions about Johnson’s role in the campaign, although it did send out press releases decrying the “behind-closed-doors” fundraising efforts of John McCain and President Bush.

It’s likely that Obama came to know Johnson through the Daley political machine in Chicago. Johnson and Chicago Mayor Richard Daley are said to be close.

No matter how they were introduced, the selection of Johnson to be a part of the inner circle seems to run contrary to Obama’s campaign theme  of “change.”

Johnson represents Washington power as it’s always been. He’s the consummate insider. He’s very rich, very connected and very much behind the scenes.

Johnson’s wealth and politics appear to be related.

Start with politics, which always have been a part of Johnson’s life.  He is the son of the late A.I. Johnson, a Swift County man of modest means who was a member of the Minnesota House of Representatives from 1941 to 1958. A.I. Johnson rose to the position of House speaker during the 1955 and ’57 sessions.

A.I.’s passion was education. Though he had only an eighth-grade education himself, he became a member of the board of regents at the University of Minnesota and pushed hard for higher education across the state.

If that name, A.I. Johnson, rings slightly familiar to you, it may be because Jim and his wife, Maxine Isaacs, gave $1 million to the University of Minnesota a few years back. In return, the university named the oft-used great room at the McNamara Alumni Center in A.I.’s memory.

Johnson, who has a bachelor’s degree from the University of Minnesota (1966) and a master’s in public affairs from Princeton (1968), also has given a substantial gift to Augsburg College, in his mother’s memory, and has received an honorary degree from that school.

Before his days with Mondale, Johnson worked on the campaigns of Gene McCarthy and George McGovern. When not involved in campaigns, he worked for Dayton Hudson and later taught at Princeton.

“As I remember it,” said Mondale, who knew Jim’s father, “he came by to visit. He was bright and interested and so I hired him.”

He was a senior aide to Sen. Mondale, an executive assistant to Vice President Mondale and the chairman of Mondale’s 1984 presidential campaign.

What Johnson offered Mondale were incredible organization skills (he keeps file cards on everything). He never forgets a name, and he absorbs policy.

“Just the sort of person you need,” said Mondale.

He’s also very tough, said three close observers who have worked with him over the years, including two high-powered players in DFL politics. Because of their ties, none of them wanted to speak on the record.  “There’s no percentage (in talking about Johnson),” said one.

“He seems nice enough,” said Spannaus. “He’s friendly. You don’t have trouble picking him out in a room. He’s the guy who looks like a banker.”

Presumably, it is these skills — loyalty, toughness, organization and, now, endless connections — that made many speculate that Johnson would have been White House chief of staff had Kerry defeated President Bush four years ago. Appointment as secretary of the treasury was considered another possibility.

It was during Mondale’s presidential campaign that Johnson met and, later, married Maxine Isaacs, who was Mondale’s press secretary. She has been a longtime lecturer at the Kennedy School of Government and is known as a power player in her own right.

How driven? Mondale, laughing, recalled a story from the 1984 campaign. As part of the campaign, Mondale’s family and staff created a cookbook for supporters, with all providing favorite recipes.

“In his recipe, Jim said you put a hot dog in steaming water, put the hot dog in a bun, open a can of Coke and turn on the 6 o’clock news.”

In 1990, Johnson went to work for the Federal National Mortgage Association (Fannie Mae) and quickly became its $5 million-a-year chairman. His compensation rose to a reported $21 million by his final year, 1998.

But Johnson did more than make a lot of money at Fannie Mae. He increased his connections — and his access to power — by establishing Fannie Mae foundations that spread around millions of dollars. Homeless shelters, colleges, hospitals all benefited from Fannie Mae Foundation money.

Given Fannie Mae’s largess, it’s likely no coincidence that Johnson was chairman of the Kennedy Center and the Brookings Institution at the time he was heading Fannie Mae. During this period, he was known in D.C.’s inner circles as “chairman of the universe.”

In a 1997 article critical of Fannie Mae’s lavish ways, Slate called Johnson “Washington D.C.’s Medici,” a reference to the Italian family that, beginning in the 13th century, produced popes, prospered in banking and sponsored the arts throughout Europe.

“… .But he is not a philanthropist with his own money,” the Slate article said. “The fount of Johnson’s generosity is Fannie Mae’s foundation… .What makes Fannie Mae special is that it is essentially the taxpayers’ money that Johnson is giving away.”

When he left his job at Fannie Mae, which long has had a reputation as a cushy landing spot for the political class in Washington, he was serenaded by 16 members of the Benson High band, which had been flown to D.C. at Fannie Mae’s expense. He also received a number of perks, including a $600,000 annual consulting fee.

It should be noted that Johnson got out of Fannie Mae while the getting was good. Since his leaving, the massive, quasi-public home mortgage organization has been buffeted by negative headlines. Accounting scandals, dating back to Johnson’s era, have been followed by recent news that Fannie Mae has lost more than $3 billion in the housing slump. Johnson never has been accused of  being part of Fannie Mae’s accounting irregularities.

A liberal with lots of money
Though he’s labeled a political liberal, he’s apparently a believer in massive compensation for top executives.

He also is on the board of Target Corp., well-known for generous compensation packages for its top executives. He’s on the board of Goldman Sachs. And Forestar Real Estate Group. He’s been on the boards of Dayton Hudson, Gannett, Temple-Inland. All these boards continually bring a small cadre of power players together.

Does this fondness for wealth put a pimple on his liberal credentials?

“Jim is wealthy,” said Mondale. “He deserves credit, because he did it on his own. He always was good at investing. I don’t think money should disqualify somebody from being a Democrat. We’ve had people like the Kennedys who are both wealthy and progressives. Actually, I think the Democrats are pretty happy to have some people with wealth. Give Jim credit. He’s been very generous.

Johnson does spread some of his wealth around. Beside the gifts to the University of Minnesota and Augsburg, he and his spouse recently gave $250,000 to $500,000 to the Minneapolis Institute of Arts. They have been generous, too, with charitable arts gifts in D.C., which is a long way from Benson.

Doors at the Xcel Energy Center open at 7 p.m. for a Democratic political rally, where Obama and his wife, Michelle, presumably will declare victory in the Democrat Party’s contentious presidential nomination contest.