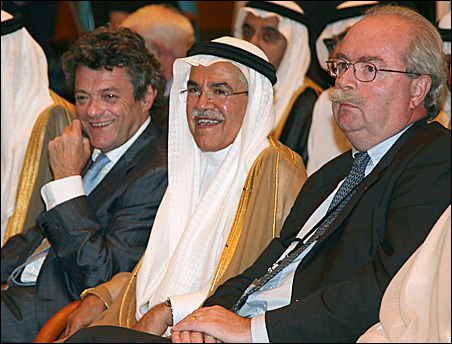 There was no universal sigh of relief after Saudi Arabia pledged on Sunday to boost oil output.

Instead, there was renewed debate over what, exactly, is causing the current crisis in energy prices and how those causes should inform energy policy for the future. A flash point in the debate is the question of whether speculators have driven oil prices to record levels.

Track all of the threads that are tied to oil prices, and you end up lost in a complex web that takes you around and around but never seems to get you anywhere you wanted to go.

Even the experts are baffled. So how can ordinary Americans be expected to assess proposals in an election year where energy issues define clear lines between candidates?

How can Congress, for that matter, come to a wise decision on President Bush’s call for lifting the moratorium on offshore oil drilling? The call is vigorously echoed by presumed Republican presidential nominee John McCain.

The personal stakes are easy to track. Beyond the gas pump, they confront Americans at the grocery store, the airport and Wall Street where the Dow Jones industrial average responded to the most recent spike in oil prices Friday by tumbling to its lowest level since March.

‘Anybody’s guess’
The puzzle begins with the why questions.

People who have spent their careers tracking the ups and downs of the global oil markets say their compasses are spinning over the question of why prices have climbed so high so fast, The New York Times reported Saturday.

“Oil prices rise for reasons they cannot quite fathom, and where prices will be a year from now has become, literally, anybody’s guess,” the Times said.

Analysts agree that increasing demand, especially from China and India, is a major factor. But what confounds many experts is that the price of oil seems to be changing much faster than the world is changing.

“Old rules of thumb and assumptions that once helped traders foresee the direction of prices no longer seem to work,” the Times said.

The upshot is that energy experts offer radically diverse predictions for the coming year, ranging from $60 oil to $200 oil.

And suspicion is mounting around the world that market forces have created a bubble of artificially expensive oil. A new breed of financial investors, including pension funds and hedge funds, view oil and other commodities as just another way to make money, like stocks, bonds and real estate.

“The evidence of their impact is mixed, but consumers and lawmakers nevertheless are furious, saying these new financial traders are driving up prices,” the Times said.

The suspicions gained traction among politicians, investors and energy leaders after the U.S. Commodity Futures Trading Commission said on May 29 it was investigating the possible role of index-fund investors in the doubling of oil prices during the past year, Bloomberg reported.

Saudi Arabia’s pledge
Saudi Arabia’s King Abdullah weighed in on the debate Sunday, saying, “Among other factors behind this unjust increase in oil prices is the abhorrent act of speculators acting for their own selfish interests,” AFP reported.

Saudi Arabia, the world’s biggest oil exporter, pledged Sunday at an emergency energy price summit, to increase its oil production by 200,000 barrels a day, according to the Bloomberg report.

Many of the world leaders who attended the summit at Jeddah, the Saudi city on the Red Sea, also called for tighter regulation and more data on index fund activity.

U.S. Energy Secretary Samuel Bodman, in Jeddah for the summit, rejected calls to put greater controls on markets, saying a supply shortage was responsible for pushing oil prices higher. He disputed the view that speculators are leading the markets to record levels, Bloomberg said.

The only clear point in all of this give and take is that stepped up Saudi output offers little hope for price relief. In the short term, it could be offset by production disruptions in other oil-producing nations such as Nigeria, where militants have sabotaged oil facilities. In the long term, it could set back momentum for finding energy alternatives and changing gas-guzzling behavior.

Meanwhile, Congress has scheduled more hearings on energy prices this week. One is focused on the question of whether the skyrocketing prices relate to “a bubble or a new reality.”

There is expert support around the world for the bubble theory.

“It’s like the dotcom boom in the 1990s,” Mark Lewis of Energy Market Consultants told the BBC.

There also is ample evidence that global politics plays a role. When the New York oil price broke through $100 a barrel for the first time at the start of 2008, one of the factors cited as being behind it was the assassination of Benazir Bhutto in Pakistan Dec. 27 last year, the BBC said.

Iraq war and Big Oil
More recently, friction between Iran and the Western powers has spiked fears of supply interruptions.

All of this uncertainty comes on top of longstanding suspicion that the Bush administration launched the Iraq war and other major government initiatives in the interests of Big Oil.

Add heated emotions over energy conservation, ethanol and other energy alternatives and you get a steaming political cauldron. Congress failed this year to pass a major renewable energy bill which would have extended tax credits for solar energy, wind power and other renewables. If lawmakers now go along with Bush’s call for lifting the moratorium on offshore oil drilling, angry protest is sure to erupt.

The sum of it all is an explosive election-year issue on a subject that even the experts can’t completely fathom.

Oil prices rise, and no one knows why