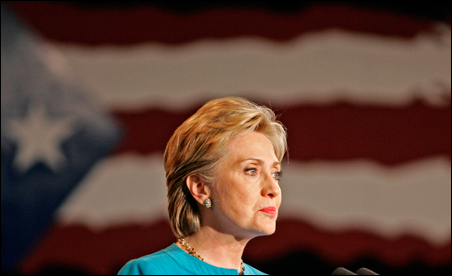 Sen. Barack Obama is coming to Minnesota Tuesday night for a victory rally at the site of this year’s Republican National Convention, the Xcel Energy Center in St. Paul.

The intended symbolism is bold and clear.

But the drama as this marathon primary season finally ends on Tuesday is in the camp of Obama’s indefatigable rival for the Democratic presidential nomination, Sen. Hillary Rodham Clinton.

What will Clinton do after the last vote is cast in South Dakota and Montana, leaving Obama with a clear lead in delegates? Will the politically engaged women who support her let go of this chance at the White House without a continued fight? Will she? What will all of them do in November?

A weekend of tumultuous political events made the questions more intriguing and the answers more elusive than ever.

Female officeholders seething
Rage among women has been mounting as chances faded that Clinton could win in the primaries. Last week E.J. Dionne Jr. of the Washington Post took an anger sample from some of the nation’s Democratic officeholding women. He concluded ominously that “the fury and disappointment is more than short-term maneuvering.”

Many of the women in Dionne’s sample had first-person roles in their gender’s epic fights for equality in the 20th century: Therese Murray, first woman president of the Massachusetts Senate; Rep. Darlene Hooley, D-Oregon, who was the first woman on the city council in West Linn, Ore.; and Minneapolis City Council President Barbara Johnson, whose mother (Alice Rainville) was the first woman to lead that council.

They are women “who themselves broke gender barriers at various levels of politics,” Dionne said.

They also “are professional politicians, so they know that Clinton is on the verge of defeat because of her campaign’s organizational mistakes, its failure to take Obama seriously early on and the difficulties created by her husband’s presence,” he said.

Still, they were seething over what they saw as sexism in the media’s campaign reporting. It was wrong, they said, for Clinton to be dismissed as a politician whose time has passed at an age when many men are achieving their political prime. They were heartbroken at the loss of this chance to break the highest barrier for the sake of their daughters and granddaughters.

Raw and tense
The anger erupted Saturday after the Democratic Party’s rules committee dealt Clinton a major setback by voting to give delegates from disputed Florida and Michigan primaries only half a vote each at the party’s convention in August. Clinton won those primaries, which were held early this year in defiance of party rules. A full vote for those delegations was her best last chance for clipping Obama’s lead in delegates, and she had crusaded for weeks for “every vote to count.”

The New York Times described the meeting and its aftermath as raw and tense.

“The committee members found themselves in a surprising drama that riveted hundreds of spectators, reporters and party activists,” the Times said.

As votes were taken, the Times said, “one woman, wearing a blue “Team Hillary” shirt, shoved a man in a suit and tie wearing a small Obama button on his lapel. Another woman in a white Clinton shirt hung her head in her hands.”

In Minnesota and across the nation, some women who are party activists have sounded the same threat. They could be dismissed as sore losers, but these women provide vital support for the party, not only at the voting booth but also in the campaigns.

As party officials reached their decision Saturday on the Michigan and Florida delegates, one of Clinton’s chief advisers, Harold Ickes, signaled that she may continue fighting after the last primaries on Tuesday, the Times reported.

“Mrs. Clinton has instructed me to reserve her rights to take this to the credentials committee,” Ickes said, raising the specter of a fight until that committee meets sometime before the convention in August.

“His words drew cheers from Clinton supporters, including many who yelled, ‘Denver! Denver! Denver!’ — implying that the fight could go all the way to the convention in that city,” the Times said.

Record vote tallies
Further, Clinton’s campaign rolled out a new ad Sunday in South Dakota and Montana asserting that she is the popular vote leader, securing more votes than any previous primary candidate, the Washington Post reported in its blogs from the campaign trail.

“Some say there isn’t a single reason for Hillary to be the Democratic nominee,” says the ad’s narrator. “They’re right. There are over 17 million of them.”

Bill Burton, a spokesman for the Obama campaign, told the Post that “both Barack Obama and Hillary Clinton have gotten more votes than any presidential campaign in primary history”, adding: “We are, however, ahead in the popular vote now and will be ahead when all of the votes are counted Tuesday.”

Clinton’s popular-vote tally gives Obama no votes in the Michigan primary, where his name was not on the ballot and his supporters were encouraged to vote for “uncommitted.”

According to Real Clear Politics, Obama has a slight lead over Clinton in the popular vote — 17,389,116 to 17,364,592. Clinton takes the lead, though, if Michigan’s primary is included, where she received 328,307 votes and Obama none because he removed his name from the ballot.

But the popular-vote debate is largely semantic and symbolic at this point. The party’s nominee is selected by delegates, and Tuesday’s primaries in South Dakota and Montana are expected to place Obama very close to the magic number of 2,118.

‘Nomination rests with the superdelegates’
On Sunday, Clinton won Puerto Rico’s primary by a sizable margin, the Associated Press reported, but Obama gained delegates there, too.

South Dakota and Montana offer just 31 delegates, not enough to push Obama over the top.

The upshot is that “the nomination rests with the superdelegates, the prominent Democrats who can vote their choice at the August convention in Denver,” the AP said. “Advisers to both Clinton and Obama predict the some 200 uncommitted superdelegates will move quickly this week in making their choices.”

Meanwhile, Clinton is determining how to end her historic candidacy with her dignity intact and future secure.

“The former first lady and New York senator is said to be considering a range of options, including dropping out of the race and endorsing Obama, suspending her candidacy to be available in the outside chance he stumbles or carrying her fight to the convention,” the AP said.

For better or for worse, the women’s voices could influence the decision.