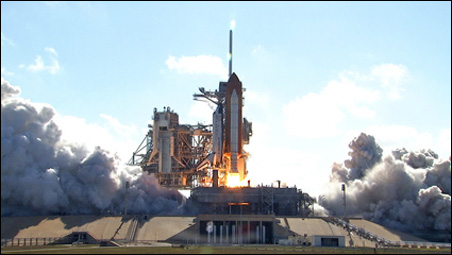 nasa.gov
Dozens of friends and family from the Minnesota towns where Karen Nyberg grew up gathered in Florida Saturday for the launch of the space shuttle Discovery.

“Godspeed, Karen,” Ed Snyder whispered to himself as he watched the space shuttle Discovery burst from its launch pad at Kennedy Space Center on Saturday and soar into the sunny Florida sky, mighty flames trailing from its rockets.

“My next thought was how proud we all are of her,” said Snyder in a telephone interview just after the launch.

Snyder was one of dozens of fans from the small Minnesota towns of Henning and Vining who expressed their button-bursting pride in astronaut Karen Nyberg by travelling to Florida to celebrate her journey into space as one of seven astronauts aboard the shuttle.

He was Nyberg’s history teacher at Henning High School.

“It was breathtaking,” said Richard Johnson, her former music teacher. “There was a lot of pride … a lot of noise (cheering) … This was our person from our small town.”

Space station today
The Discovery is scheduled to reach the 220-mile-high International Space Station today, according to a NASA timeline for the mission.

Nyberg, 38, is a mission specialist on the crew. The others aboard the shuttle are Navy Commander Mark Kelly, pilot Ken Ham, flight engineer Ron Garan, lead spacewalker Mike Fossum, Japanese astronaut Akihiko Hoshide and Greg Chamitoff, who is to stay at the space station replacing Garrett Reisman, who is to return to Earth on the Discovery. 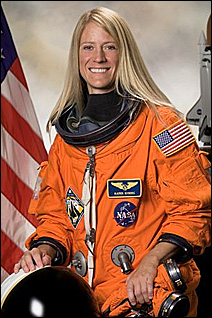 As Discovery climbed away, cameras on the spacecraft spotted what appear to be five pieces of fuel tank insulation foam fly off toward the shuttle’s underside, the Houston Chronicle reported.

“We don’t consider this to be a big deal,” Bill Gerstenmaier, NASA’s associate administrator for spaceflight, told the Chronicle.

All of the pieces peeled away after the 135-second mark in the shuttle’s climb to orbit, a point where the Earth’s atmosphere is so thin the debris bounces away rather than slamming into the spacecraft, he said.

In orbit, Nyberg used a robotic arm on the shuttle to look for damage and saw none. A more thorough inspection will come today when the Discovery docks with the space station. Two of the station’s astronauts will photograph the shuttle as it does a slow flip and transmit the imagery to damage experts in Mission Control.

Installing the ‘Hope’ lab
The to-do list for the 14-day mission includes delivering and installing major components for the Japanese science module known as the “Kibo” (hope) laboratory. Once completed, the lab will be used for astronomical observations, physics experiments and other studies. Two space walks are scheduled to install the 37-foot, 32,000-pound Kibo lab and its remote manipulator system.

Nyberg is not scheduled to walk in space. Instead, she will become the first astronaut to operate three robotic arms in orbit. Using arms on the shuttle and the space station, she is to inspect the Discovery’s heat shield and help to install and test the Kibo lab.

A last-minute task added to their duties is to ferry parts for a malfunctioning toilet at the space station.

Hometown contingent
Nyberg, the 50th woman to travel in space, was born in Parkers Prairie, Minn., grew up in the hamlet of Vining and graduated from nearby Henning High School. After graduation in 1988, she earned a bachelor’s degree in mechanical engineering at the University of North Dakota and finally a Ph.D. in the same subject at the University of Texas at Austin.

This was her first voyage into space since she was selected as an astronaut in 2000.

Johnson, the music teacher, estimated that at least 10 of her former teachers and another 50 or so friends and relatives from Minnesota accepted her invitation to join the launch festivities.

Nyberg was not able to join them for the buffet dinner at a pre-launch reception on Friday night, but they watched a video of her thanking them for coming, Johnson said. Her parents, Kenneth and Phyllis Nyberg of Vining, were able to meet her for a private dinner on Thursday night, he said.

If anyone was apprehensive about the risks of space travel, they didn’t show it, said Snyder, the former history teacher.

“The family showed no nervousness,” Snyder said. “They were very enthused and very pleased … I am very pleased to have been given the opportunity to do this.”

Family members watched the launch from a private viewing facility while the other Minnesotans took spots in a large public observation area with fans of the other astronauts.

“It was interesting to talk to the other people,” Johnson said. “Many of them could not envision a town as small as Vining (population 68).”

Nyberg is at least the seventh astronaut with Minnesota ties to travel in space. The others were Robert Cabana, a Minneapolis native; Duane “Digger” Carey from St. Paul; Dale Gardner, who lived in Fairmont and Sherburn; Heidemarie Stefanyshyn-Piper from St. Paul; George “Pinky” Nelson from Willmar; and Donald “Deke” Slayton, who was born in Sparta, Wis., but graduated from the University of Minnesota and served with the Minnesota Air National Guard.