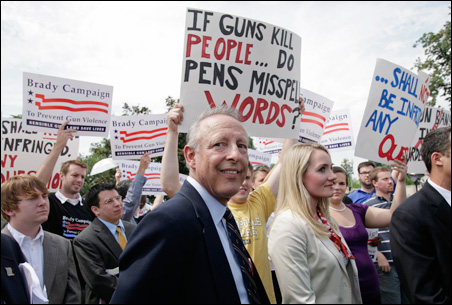 REUTERS/Yuri Gripas
Plaintiff Dick Heller makes his way through a sea of signs Thursday outside the U.S. Supreme Court, which ruled on his case.

Thursday’s historic Supreme Court’s decision clarified the keeping and bearing of arms as an individual constitutional right apart from any military connection. But it left unclear the ways in which governments can attempt to control the spread of guns within the community.

The Second Amendment right is not absolute, Justice Antonin Scalia wrote in his majority decision. (PDF) Governments can, for example, make it illegal for felons and the mentally incompetent to buy and possess guns, he suggested. And there might be certain “sensitive” places, presumably schools, where guns could be prohibited. The licensing of firearms is presumably still acceptable, and might include classes on safety as well as background checks and registration logs of guns and owners that police find useful in solving crimes. Machine guns might not be an appropriate form of protection for one’s home. Ordinances against concealed guns might be OK.

But these and other restrictions on gun rights will now be tested in the courts. Scalia suggested that Americans should expect a flurry of litigation to sort out these matters case by case.

“Since this case represents this court’s first in-depth examination of the Second Amendment, one should not expect it to clarify the entire field,” he wrote. “And there will be time enough to expound upon the historical justifications for the exceptions we have mentioned if and when those exceptions come before us.”

“This is a great moment in American history,” said Wayne LaPierre, head of the National Rifle Association. “It vindicates individual Americans all over this country who have always known that this is their freedom worth protecting.”

The specific case under review was the District of Columbia’s ban on handguns enacted in 1976. The ordinance allowed homeowners to keep shotguns and rifles but required that they be kept not fully assembled or with trigger locks. That was too restrictive for the court’s conservative majority. The effect of the D.C. ordinance was to render a firearm inoperable “for the purpose of immediate self-defense,” the court said.

“I’m thrilled I am now able to defend myself and my household in my home,” said Dick Heller, the gun owner who sued the District of Columbia after it rejected his application to keep a handgun at his home.

Minnesota’s anti-gun lobby seemed unimpressed by Thursday’s decision. “If anything, this decision should put gun owners’ fears about gun regulation completely to rest,” said Heather Martens of Citizens for a Safer Minnesota. “It doesn’t change our efforts to ensure that guns stay out of the wrong hands.”

But many gun control advocates criticized the ruling. Most troubling was the court’s rejection of their interpretation that gun rights pertain only to military purposes. This has been an enigmatic point in law for more than 200 years. The amendment’s 27 words are these:

“A well regulated Militia, being necessary to the security of a free State, the right of the people to keep and bear Arms, shall not be infringed.”

Scalia said that a militia was only one example of a broader and more complete pre-existing right.

The dissenters
Justice John Paul Stevens disagreed and said in his dissent that when the Second Amendment is “most naturally read” it gives people “a right to use and possess arms in conjunction with service in a well-regulated militia, no more than that.”

He accused the court’s majority of judicial activism in selectively removing the militia clause. They have claimed “a far more active judicial role in making vitally important national policy decisions that was envisioned at any time in the 18th, 19th or 20th centuries,” Stevens wrote.

Editorialists chimed in. The traditionally conservative Chicago Tribune blasted the decision. “Repeal the Second Amendment. No, we don’t suppose that’s going to happen any time soon. But it should,” the paper said. While the nation’s founders were brilliant, they could have used an editor on the awkward Second Amendment. The Tribune said:

“If the founders had limited themselves to the final 14 words, the amendment would have been an unambiguous declaration of the right to possess firearms. But they didn’t and it isn’t. The amendment was intended to protect the authority of the states to organize militias. The inartful wording has left the amendment open to public debate for more than 200 years. But in its last major decision on gun rights, in 1939, the [court] unanimously found that that was the correct interpretation.”

A New York Times editorial said: “Thirty-thousand Americans are killed by guns every year — on the job, walking to school, at the shopping mall. The [court] all but ensured that even more Americas will die senselessly, with its wrongheaded and dangerous ruling.”

Scalia declared “the right to bear arms for nonmilitary uses, even though the amendment clearly links the right to service in a ‘militia,’ the Times noted. Indeed, one interpretation of the ruling could be that we’ve now all been placed into an armed militia, whether we like it or not.

In that light, Justice Stephen Breyer, one of the four dissenters, called the decision “potentially dangerous” and outlined his belief that cities should be given wide latitude in attempting to control guns in high-crime areas.

Peter Nickles, attorney general for Washington, D.C., called the decision “simplistic” and emphasized that no constitutional right is absolute. The First Amendment, for example, protects free speech, but not enough to yell “Fire!” in a crowded theater or put pornography on your website. Under the Second Amendment, a high-crime urban area must have reasonable latitude to regulate guns, he said.

Chicago’s ordinance in the sights
Chicago’s restrictive gun ordinance figures to draw the next wave of court attention. Even as the Supreme Court’s decision was revealed, gun enthusiasts filed a lawsuit against it. The effort was not only legal but political, given that the likely Democratic presidential nominee, Sen. Barack Obama, is a Chicago resident.

Sen. John McCain, the presumptive Republican nominee, quickly pounced on the issue. “Today’s ruling … makes clear that other municipalities like Chicago that have banned handguns have infringed on the constitutional rights of Americans,” he said in hailing what he called “a landmark victory.” He accused Obama of flip-flopping on the issue and again painted him as an elitist who, during the primary season, had made a comment about bitter working class Americans clinging to guns and religion.

Indeed, Obama, generally a gun-control supporter, seemed to neatly sidestep the question. He said he’s “always believed” in the right of an individual to bear and keep firearms at home. But that shouldn’t stop high-crime cities from trying to keep streets safe by controlling the trafficking of guns, he said.

While the gun issue is unlikely to become a huge wedge in the campaign (most gun rights enthusiasts probably support McCain anyway), Obama’s softer position could hurt him in some western and southern states (Nevada, Montana, Georgia, etc.) where he has a chance to win.

Guns, rights and the U.S. Constitution
By Matt Ehling
February 28, 2008