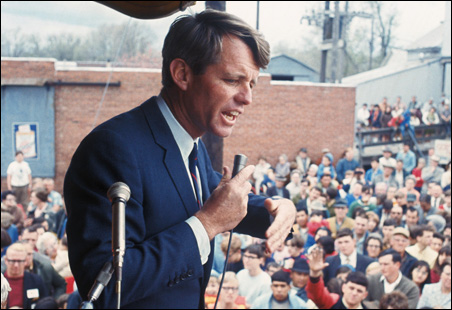 When Sirhan Sirhan shot Robert F. Kennedy 40 years ago, he killed a complex political fighter and a star figure in the Kennedy family saga. But he couldn’t kill a legend that many will honor today on the anniversary of that assassination.

Kennedy expressed the essence of the legend on April 4, 1968, when he told a crowd in Indianapolis the tragic news that the Rev. Martin Luther King Jr. had been assassinated:

Declaring Kennedy to be his hero, Wellstone set off in 1997 to retrace a “poverty tour” Kennedy had taken 30 years earlier. The point of both tours was to show the nation the shocking hunger and want in the midst of wealth and privilege.

Wellstone had worked on Kennedy’s 1968 presidential campaign. But the two men never met. And Wellstone declared often on the tour, “I’m not Bobby Kennedy.”  Still, he called forth the Kennedy spirit. 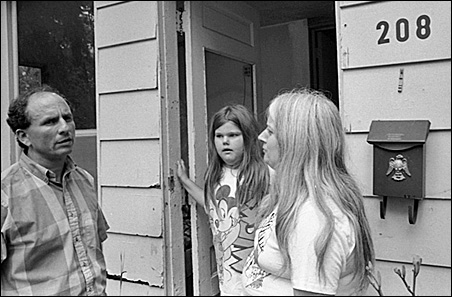 Photo by Terry Gydesen
Sen. Paul Wellstone on a stop in Greenville, Miss., in 1997, when he retraced Robert F. Kennedy’s poverty tour of 1967.

Covering a good share of the tour as a Star Tribune Washington Correspondent, I met the despair that had stirred passion in Kennedy. I could see how the mansion-dwelling graduate of elite prep schools and Harvard University could be moved to champion the cause of the poor and powerless and do it with convincing sincerity.

In Appalachia, we trailed up and down the steps of rickety shacks where weary parents would struggle to pay bills and Wellstone would rail about pitiful wages for the working poor. In Chicago’s ghettos, we sat beneath the gritty, barred windows of community centers and heard about streets so dangerous that the murder of kids was almost routine. In a Los Angeles barrio, we met poor mothers who were desperate to keep their kids from selling drugs and stealing cars.

The details had changed over three decades. Real gains had been made. Wellstone’s bid was to further Kennedy’s work by building on them.

Another Minnesota senator
One thing that hadn’t changed was fiery debate over tackling poverty and racial disparities.

The debate surfaced back in 1968, when Kennedy’s history intersected with another Minnesota senator in ways that were not nearly so dreamy. 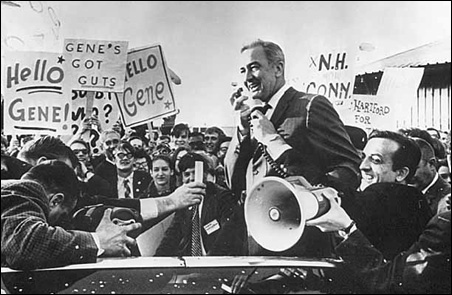 The Vietnam War was the power issue against Johnson. Although they differed on important particulars, Kennedy, like McCarthy, had called for an end to the American bombing. And he stole some of the Minnesota senator’s anti-war base.

McCarthy lashed back, attacking Kennedy on his signature issue, anti-poverty.

Kennedy had favored expansion of public and private spending to build up black areas in the cities. McCarthy charged that the “gilding the ghetto” approach would reinforce racial separation, historian James T. Patterson said in his book “Grand Expectations.”

“McCarthy, emphasizing the goal of integration, denounced Kennedy’s stance and called instead for the construction of ‘new towns’ on the edge of cities, so blacks could move out and live where the jobs were,” Patterson wrote.

Powerful emotions
Still, Kennedy solidified his appeal as a champion of poor and working-class Americans, and his campaign caught fire.

“He attracted huge and sometimes frighteningly responsive crowds almost everywhere,” Patterson wrote. “More than once he emerged from crowds with torn clothes and with hands bleeding from the hundreds of squeezes and slaps that besieged him. Veteran political observers were astonished and shaken by the powerful emotions that Kennedy aroused.”

The adoration propelled Kennedy to victory in the California primary and he went to a ballroom in Los Angeles’ Ambassador Hotel to address his supporters. While he was leaving through a kitchen passageway in the early hours of June 5, 1968, Sirhan Sirhan, a 24-year-old Palestinian, shot him with a .22-caliber revolver. Kennedy died the next day.

A different outcome
What if he had lived and become president? Evan Thomas, author of “Robert Kennedy: His Life,” explored the intriguing question in Newsweek.

First, a reality check: It is no sure bet that the Democrats would have nominated Kennedy, even after Johnson decided to retire. Yet another former Minnesota senator, then Vice President Hubert H. Humphrey, was the presumed successor. 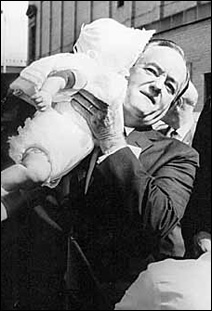 “Under the old rules the bosses still controlled the Democratic Party,” Thomas said. “Kennedy was regarded as too ‘hot’ and too radical by the big city and Big Labor chieftains.”

And Kennedy would have faced a formidable foe in November: Richard Nixon, then building his own working class following among Americans who were disgusted by hippies and scared by urban riots.

Let’s assume, though, that Kennedy rode his wave of change to the White House. Delivering on his pledge to fight poverty would not have been easy. Kennedy preferred creating jobs rather than handing out cash, so he would have moved to set up jobs programs. But organized labor would have fought him in Congress.

“Big labor did not like to create low-paying jobs for unskilled workers, thereby diminishing the power of union workers,” Thomas said.

Kennedy was impatient — some said, ruthless. How would he have handled power? History suggests he would have been tempted to abuse it, Thomas said.

“RFK was willing to at least condone, if not order, CIA dirty tricks as his brother’s surrogate chief of the spy agency’s botched Get Castro operation in the early ’60s,” he said.

The real test is how Kennedy would have handled a crisis. Thomas looked to the Cuban Missile Crisis.

When CIA spy planes discovered Soviet missiles in Cuba in October 1962, then President John F. Kennedy put together an expert panel and placed his brother in charge of deliberations.

“RFK himself started off as a hawk, wanting to bomb and invade Cuba, but his moral sense rebelled: he realized that the world would see an American attack as a Pearl Harbor,” Thomas said. “Then RFK’s shrewd mind came alive, and he helped negotiate a behind-the-scenes way for the Soviets to remove their missiles while saving face — allowing both sides to back down from the precipice of war.”

Kennedy was able to listen to contrary advice — indeed, to seek it out, “a quality notably missing from some leaders, including George W. Bush,” Thomas said.

“He was at once passionate and detached, a rare combination but essential in a leader,” he said.

A speech to remember

One of Robert F. Kennedy’s most memorable speeches was his impromptu address on April 4, 1968, telling a crowd in Indianapolis that the Rev. Martin Luther King, Jr., had been assassinated. A video of the speech is here.

Here is his speech.

I have bad news for you, for all of our fellow citizens, and people who love peace all over the world, and that is that Martin Luther King was shot and killed tonight.

Martin Luther King dedicated his life to love and to justice for his fellow human beings, and he died because of that effort.

In this difficult day, in this difficult time for the United States, it is perhaps well to ask what kind of a nation we are and what direction we want to move in. For those of you who are black — considering the evidence there evidently is that there were white people who were responsible — you can be filled with bitterness, with hatred, and a desire for revenge. We can move in that direction as a country, in great polarization — black people amongst black, white people amongst white, filled with hatred toward one another.

Or we can make an effort, as Martin Luther King did, to understand and to comprehend, and to replace that violence, that stain of bloodshed that has spread across our land, with an effort to understand with compassion and love.

For those of you who are black and are tempted to be filled with hatred and distrust at the injustice of such an act, against all white people, I can only say that I feel in my own heart the same kind of feeling. I had a member of my family killed, but he was killed by a white man. But we have to make an effort in the United States; we have to make an effort to understand, to go beyond these rather difficult times.

My favorite poet was Aeschylus. He wrote: “In our sleep, pain which cannot forget falls drop by drop upon the heart until, in our own despair, against our will, comes wisdom through the awful grace of God.”

Let us dedicate ourselves to what the Greeks wrote so many years ago: to tame the savageness of man and make gentle the life of this world.

Let us dedicate ourselves to that, and say a prayer for our country and for our people.