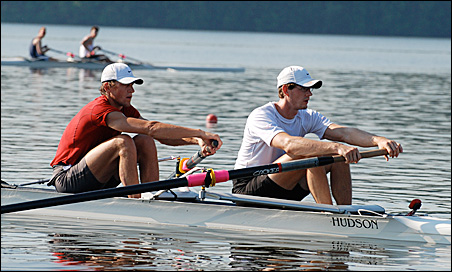 There’s something about rowing. I’m not exactly sure what it is. But there’s a purity to it. There’s an environmental beauty to it. There’s surely a rhythm to it. Dare I say, there’s an elitism to it that is soothing to us elitists who grow tired of the scratching, spitting and swearing of baseball.

Matt Schnobrich — from the heart of St. Paul, right near the College of St. Catherine’s —  cringes at the notion that his sport is hoity-toity, but understands what I’m talking about.

“Historically, rowing is something that’s always been reserved for Ivy League schools and the Oxfords and Cambridges of the world, and to its detriment,” Schnobrich told me last week over cups of coffee at a Philadelphia café.

He’s lived in the City of Rowerly Love for four years now, pursuing what he officially earned this morning.

Incredibly, a second St. Paulite was named to the men’s eights, too. That’s Micah Boyd, who grew up in the St. Anthony Park section of St. Paul and went to St. Paul Central and then the University of Wisconsin-Madison. He, too, has been training in Philadelphia.

Philly is a town that has 10 boat club houses on what’s long been known as Boathouse Row. The houses sit along the Schuylkill River that runs right through center city Philadelphia. True Philadelphians — I grew up there and emigrated to Minnesota 30 years ago — call it the “Skooo-kul.”

There, when I was growing up, the fair-haired lads from Penn and private boat clubs, like Vesper and Penn A.C., and the suburban Quaker- and Episcopal-run prep schools would row their sculls … that’s before the working-class colleges, like Temple, got into the act. Women, too.

“For a long time, people associated rowing with guys on the shore with sweaters around their necks and polo shirts, and women in funny hats,” Schnobrich said. “Rowing’s begun to reach out.” 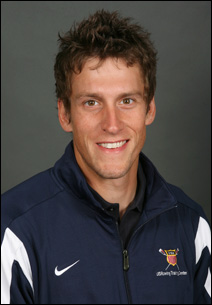 Even to a guy from that little ol’ football factory, St. John’s University in Collegeville. He didn’t pull an oar until he was a freshman there in 1997.

Twice-a-day training in Princeton
Now, 11 years later, he trains twice a day in Princeton — about 45 miles north of Philly —   while, up until recently, working 35 hours a week as an environmental engineer.

He wanted the eights spot on the Olympic team bad. Schnobrich and rowing partner Josh Inman had won the pairs boat Olympic berths two weeks ago. That was cool. He was happy. But it’s not the centerpiece event.

When asked about making the eights, he wrote to me in an email: “Really excited … very excited, and there is huge potential for this group in Beijing.”

He’s thinking medals, with the Germans, Canadians, New Zealanders and Brits sure to be in the way.

What always sticks with me about rowing is how spent these athletes are at the end of their race. I know,  marathoners collapse. And weightlifters push every limit. And NBA players expend tons of energy. And World Cup soccer players sprint many, many miles in a 90-minute game. Every endurance, power and speed athlete exhausts him or herself.

“You feel the burn after you’re forty-five seconds into it,” he said, and then there are five more minutes to go. “Your arms, your legs, your back, your lungs. It’s definitely a full body activity.”

Schnobrich, the son of two long-time 3M employees, knew none of this 11 years ago when, after playing soccer and cross-country skiing at St. Thomas Academy, he wandered onto the Saint John’s campus and was told by a dorm counselor that there was a rowing team on the lovely, isolated, Stearns County campus.

He tried it on Lake Sagatagan.

Idyllic mornings on the lake
“No motor boats, cool mornings, steam on the lake,” Schnobrich remembered. “It was idyllic.”

Two weeks into his career, Schnobrich and the Johnnies’ novice crew headed to a regatta in Elkhart, Ind., only to find themselves up against teams from Northwestern, Notre Dame, Purdue and Michigan. Big boys. Real rowers.

Overwhelmed, yes. But also, he said, “It was intriguing. I could go to a small college like St. John’s and compete against Division I schools. There were no boundaries, except for speed, of course.”

His team didn’t finish last that day — but only because two boats didn’t show up.

“DNS,” he said, meaning those other competitors, “Did Not Start.”

“We beat ’em,” he said, straight-faced. “We had no lofty goals and no big shoes to fill.”

But, alas, Schnobrich dived into rowing, creating his own lofty goals. During college summers he started competing at the Minneapolis Rowing Club on the Mississippi. Upon graduation from St. John’s, he took it more seriously. While earning his master’s in engineering at the University of Minnesota, some veterans at the Minneapolis club urged him to try the East Coast rowing scene.

He did. Within a year, he was part of the USRowing elite system. Soon after, he was on a series of world championship teams, in pairs and fours.

But never the eights. Not until today.