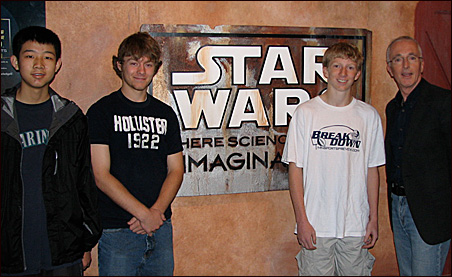 Here in St. Paul this summer: odd-looking characters in unusual clothing; empire builders and those who oppose them; and theories and models that look great on the drawing board but don’t quite work in the real world. Yet.

No, you cynics, not the Republicans.

It’s “Star Wars: Where Science Meets Imagination,” which opens Friday at the Science Museum of Minnesota and is expected to draw a quarter of a million visitors before it closes Aug. 24.

The major traveling exhibit contains artifacts and models from the six blockbuster George Lucas movies. It includes many hands-on learning stations, so no one can say it’s just an entertainment exhibit masquerading as science. Visitors can make their own robots, steer an air-powered vehicle and try magnetic propulsion.

Because the mseum expects large numbers of visitors, it is using a timed-ticket system that specifies hour and date. Only 400 at a time will fit into the exhibit hall, where they can gawk at the Luke Skywalker’s landspeeder (full-size), C-3PO’s costume, the R2-D2 droid, and models of the Millennium Falcon and the X-wing and Y-wing fighters.

There’s also a 15-minute film (made by our Science Museum) that looks at real-life robotics through the eyes(?) of C-3PO and a real-life MIT professor.

Dedicated fans will want to spend at least an hour, maybe two, taking in the entire exhibit.

To accommodate as many visitors as possible, museum hours have been expanded to 15 hours a day, seven days a week, during the run. That’s twice as long as normal summer weekday hours.

To help promote the opening, Anthony Daniels, the actor who portrayed C-3PO in the films and has become the iconic voice of the series, was in town today conducting interviews for a media preview event. He was very particular about anyone making any noise while he was speaking on camera but, when not in the limelight, took time to show visitors how some of the learning exhibits work.

Also on hand was Tim Knop of Bose, the speaker company that is sponsoring the exhibit and supplying the sound systems. Knop, who’s been at all eight science museums on the tour, said the St. Paul set-up is one of the best. “It’s a particularly nice space,” he said. “Things are less crowded together here.”

Knop’s favorite is the Millennium Falcon simulator, a separate attraction, much like the “Back to the Future” ride at Universal Studios or a Disney simulator ride. Its computer wasn’t booting up properly Thursday morning, but it should be operating for the opening.

The similar is a separate ride, costing an additional $3. Science Museum officials aren’t sure yet how the logistics of the line will work. Because the Falcon holds only four people at a time, only a fraction of visitors will be able to take the 5-minute simulated ride into space aboard Han Solo’s ship.

What visitors need to know about the ‘Star Wars’ exhibit

When and where: Friday through Aug. 24 at the Science Museum of Minnesota, 120 W. Kellogg Blvd., downtown St. Paul.

Tickets: $19 for adults and $16.50 for ages 4 to 12 and seniors 60 and older. (Tickets include the usual exhibit-only museum admission of $11 for adults and $8.50 for children and seniors.) All-inclusive tickets for  the basic “Star Wars” exhibit, other museum exhibits and the Omnitheater film “Special Effects” are $24 for adults and $21 for seniors and children. Science Museum members pay $8 for each “Star Wars”/Omnitheater ticket.

Parking: Available in the adjoining museum parking ramp, accessible from Kellogg Boulevard or from the lower level off Chestnut Street.
There is also metered parking and other nearby parking lots and ramps in downtown St. Paul.

For more information: Check here for exhibit details and logistics.