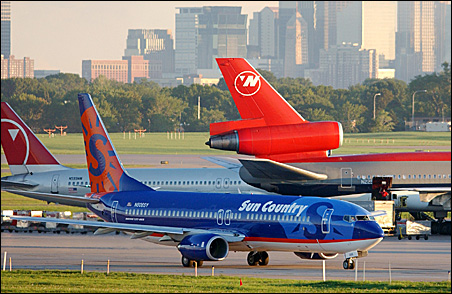 Although not everyone thinks as highly of the low-fare airline’s prospects, CEO Stan Gadek considers the pending merger “a positive for Sun Country.”

But first, Gadek and his Mendota Heights-based airline must deal with mounting operational losses.

They took a big step toward propping up finances Wednesday, when Sun Country executives and union members met with a group of state legislators to seek short-term financial relief.

The company hopes to build public support for a state aid package of “upwards of $50 million” to maintain its current business model and help it cope with escalating fuel costs. The package could come in the form of such arrangements as loans or fee abatements from the Metropolitan Airports Commission, the company said in a prepared statement given Wednesday night to MinnPost.

Gadek told the Pioneer Press that legislators were receptive to the case he made.

“This is a situation that we have managed creatively so far with cutbacks, additional charter flying and capital infusions from our ownership, but we can’t do it indefinitely,” Gadek said in the company statement. “We believe it is in the best interest of Minnesota to help us sustain operations through this turbulent time and maintain a locally owned and operated airline. … We can continue doing that into the future — with some relief over the next 24 months.”

Sun Country also argues that it provided “a $225 million annual savings” to Minnesota in 2007 and provides 1,000 jobs.

“The current fuel price crisis, however, has stressed the airline, despite company-wide wage reductions, layoffs, vendor savings and development of new sources of revenue,” the statement said. Sun Country expects fuel costs to exceed its forecast by $33 million, or 37 percent.  “Every $5 increase in the price of [a barrel of] oil increases Sun Country’s annual fuel bill by $4 million,” the company said.

Sun Country losses mounting in past four quarters
Sun Country lost $8.3 million in the first quarter of 2008, according to data released this week by the federal Bureau of Transportation Statistics. That brings its net losses to $43 million on operating revenue of $243 million in the four quarters that ended in March. That compares to a net loss of $15 million on $229 million in revenue during the first quarter of 2007, according to BTS figures.

The airline’s first-quarter operating costs rose to $284 million in the quarter ending in March, about 16 percent higher than the same quarter last year, the BTS reported.

Overall, Sun Country saw operating losses of $33.5 million in calendar year 2007 on revenues of $238.9 million, according to the U.S. Department of Transportation’s Office of Aviation Analysis. That resulted in an overall net 2007 loss of $35.4 million.

Earlier this week, Gadek told the Star Tribune, “With oil spiking near $140 a barrel, the situation continues to be a challenging one for airlines.”

The airline recently made several moves to meet such challenges. In early April, the airline announced it was temporarily laying off 45 of its 156 pilots. (It has since rehired seven pilots to fly a newly leased 737-700 jet, with tentative plans to bring the rest back in November. Over the summer months, it is operating with just six jetliners, said Gadek, who joined Sun Country as CEO in March,)

The company says it is not considering such revenue-padding moves as charging people $15 for carry-on bags, as American Airlines recently did. But it did announce last month that it would cut management salaries by 10 percent to offset fuel-related losses. Gadek is docking his own salary by 15 percent, a spokeswoman confirmed.

Sun Country also has undertaken a strategic shift since its purchase in October 2006 by Minnesota business magnate Tom Petters, several analysts point out. Post-bankruptcy, the carrier has focused on such high-traffic vacation destinations as Las Vegas and San Diego, as well as a lucrative side business in domestic military charters that, Gadek says, now makes up about 15 percent of its business.

Gadek upbeat about potential long-range impact of merger
Despite the current uncertainties, Gadek is upbeat about the long-range forecast for Sun Country. In an interview last month with MinnPost, he talked extensively about what the Northwest-Delta merger portends for his airline.

Like some others, he expects the post-merger Delta AirLines to shift its attention to the more-lucrative international flights, rather than domestic operations, leaving a bigger opening for Sun Country.

“I’m not saying that these large domestic airlines will stop growing domestically,” Gadek said. “I just think that they’re going to focus more on the routes and the markets that complement and feed their international services, as opposed to flying everywhere domestically.”

At least two noted industry analysts see other reasons why the merger could help Sun Country soar, if industry-wide fuel-cost problems can be brought under control.

“In my opinion, this [merger] means nothing but good news,” said Terry Trippler, a Twin Cities-based airlines consultant, by allowing Sun Country to market itself to locally based travelers as the sole remaining “hometown airline.”

Stuart Klaskin, of Miami-based KKC Aviation Consulting and Planning, agrees with Trippler’s assessment. “In Minneapolis, as well as Detroit, Northwest really is seen with a lot of loathing among its constituents,” Klaskin said. “I think there is an opportunity for Sun Country to capitalize on being ‘not Northwest.’ “

“There are going to be fewer seats that they fly in the domestic marketplace as they merge the two companies together,” Gadek said. Low-cost carriers like Sun Country will rush in to fill that void, he said. “I firmly believe that will happen.”

Oberstar, others don’t buy Sun Country scenario
Gadek’s logic, however, flies in the face of some critics, notably U.S. Rep. Jim Oberstar, the powerful chairman of the House Transportation and Infrastructure Committee. At an April press conference in Washington, D.C., Oberstar declared the merger would be “the worst development in aviation history in the aftermath of deregulation in 1978.” He said he would use whatever leverage he has to oppose the deal.

His biggest concern, Oberstar said, is that a Delta-Northwest merger would trigger a wave of industry consolidations and global alliances that would leave the world, in effect, with just three legacy mega-carriers.

“In the face of that economic power in the marketplace, the so-called low-fare carriers will not be able to compete,” Oberstar said. Low-cost carriers cannot compete in the international flight market, he said, and they will be defeated by carriers that do.

“Southwest doesn’t travel [overseas],” he said. “They’re not competitive in the international marketplace, nor are the other low-fare carriers.”

John Schadl, an Oberstar aide, acknowledges that Sun Country’s future can’t be foretold. “All we can go by is what has happened since deregulation,” Schadl said. “And none of the airlines that have started up since deregulation, that have tried to challenge the legacy carriers, have been able to do so successfully. None of them is in business today.”

There are, however, clues to be gleaned from Sun Country’s history, Schadl said. In the late 1990s and earlier part of this decade, Sun Country tried to compete directly at the Minneapolis-St. Paul International Airport hub against Northwest as a regularly scheduled airline. Its reward was a Northwest-instigated fare war that ultimately drove Sun Country into bankruptcy in 2001. “It was not able to compete,” Schadl said.

A local group of investors in 2002 bought the remaining assets and eventually brought the company back. Petters and a partner acquired it in 2006, and he became sole owner in 2007.

Analysts see positives for post-merger Sun Country
Despite all the challenges, some industry analysts lean more toward Gadek’s positive outlook about his airline’s prospects after the NWA-Delta merger.

Trippler, for example, sees value in Sun Country emphasizing its local roots. That way, he said, it will be able to take advantage of what he foresees as a public backlash against the new Delta, once Northwest is absorbed.

“People will say, ‘OK, enough is enough,’ ” Trippler said. “Sun Country needs to make sure that everybody knows, at that time, that they are the last hometown airline. Then I think there will be that move toward Sun Country.” (The airline, in fact, previewed its “Hometown Airline” marketing campaign as part of his Wednesday meeting with legislators. The campaign debuts today.)

The Miami-based consultant Klaskin agrees, adding that the future might be bright for Sun Country — or at least its owners and managers — in yet another way.

If it is able to maintain its current levels of service, and even grow over the next several years, Sun Country could position itself as an acquisition target for another legacy carrier, or even a larger, low-cost carrier such as Southwest, he said.

“I think the low-cost carriers start to become very viable strategic alternatives to the larger carriers when they start to look at their consolidation possibilities,” Klaskin said. “Most of the low-cost carriers, especially those that have been the second carrier in a legacy carrier’s hub market — exactly what we have now with Sun Country — have a very discrete, but very loyal following.”

Gadek won’t argue against that latter point. The former CEO of AirTran Airways worked with Northwest for a dozen years beginning in the late 1970s, and has also put in time at six other airlines. None has had the following of Sun Country, Gadek said. “This is the first airline I’ve worked with where we get fan letters from our customers,” he said. “It’s just incredible.”

Gadek, who in his first three months already has overseen a round of layoffs prompted by the spiraling fuel prices, said he is intent on preserving his airline’s “small-company feel.”

Indeed, when it announced its temporary pilot layoff, the company took pains to point out that it would continue to serve in-flight cheeseburgers.

Asked if he sees his airline as a target for acquisition down the road as Klaskin predicts, Gadek brushed aside the question. “Who can predict what’s going to happen in this industry?” he said. “I will tell you what we’re going to do, and that’s continue to focus on the customer in building our reputation.”

If, however, Sun Country is acquired in the future, it will only validate Rep. Oberstar’s fears, said congressional aide Schadl. “That would be consistent with the trends that we’re seeing,” he said. “And it’s consistent with what the congressman is afraid would happen.”

Sun Country at a glance

Delta-NWA merger: What it means for you, our economy and the airlines
By Dan Haugen
4/15/2008

Is bigger always better? As Delta-NWA work on a deal, experts warn of merger
pitfalls
By Dan Haugen
5/27/2008