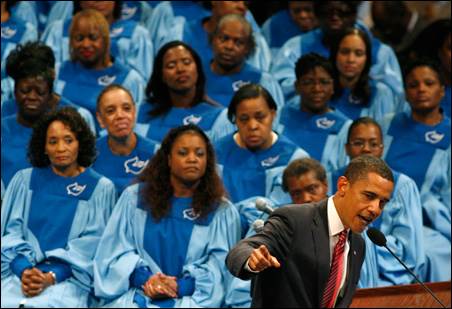 REUTERS/John Gress
Sen. Barack Obama speaks during services at the Apostolic Church of God in Chicago.

More than 300 years ago, religious groups began settling America’s English colonies, profoundly influencing the culture of what would become the United States and learning to live side by side in relative harmony. Still, given the sectarian turmoil in much of the world, Americans in 2008 remain devoutly religious yet remarkably tolerant of differing beliefs.

But, despite what’s perceived as the growing influence of the Christian right, 70 percent of Americans with religious affiliations said they believe that many religions can lead to eternal life, and 68 percent said there’s more than one way to interpret the teachings of their own religious group. Even 57 percent of evangelical Christians said they believe that there are other paths to heaven, a notion that defies evangelical doctrine.

Roger Oldham, a leader of the Southern Baptist Convention, told the Associated Press that he disliked the report’s inference that tolerance is a virtue. “If by tolerance we mean we’re willing to engage or embrace a multitude of ways to salvation, that’s no longer evangelical belief,” he said.

What that means, perhaps, is that the pluralism in America runs deeper than the exclusivity that religions and denominations tend to claim. Among mainline Protestants, 83 percent said that many religions can lead to an eternal life with God. Seventy-nine percent of Roman Catholics agreed, as did 82 percent of Jews, 56 percent of Muslims and 59 percent of members of historic black Protestant churches.

But many people with religious beliefs also expressed some doubt about God’s existence — including more than one in four Roman Catholics, mainline Protestants and Orthodox Christians, and six in 10 Jews. Conversely, 21 percent of self-identified atheists said, oddly, that they believe in God. All of that shows the difficulty of trying to quantify questions about religious belief in a telephone interview. The study included responses from more than 35,000 Americans contacted last year.

When combined with an earlier Pew report released in February, the research appears to show Americans searching for life’s meaning by, among other things, drifting among religious groups. The earlier report depicted a fluid and diverse religious life with many people moving among various denominations and faiths. That report showed more than one-fourth of adult Americans having left the faith of their childhood to join other religious groups, or leaving organized religion altogether.

“It’s not that Americans don’t believe in anything; it’s that they believe in everything,” Michael Lindsay, assistant director of the Center on Race, Religion and Urban Life at Rice University, told the New York Times.

The interplay between religion and politics also seems important to Americans. People who pray frequently and regularly attend religious services tend to be Republicans. Big majorities of Mormons and evangelicals say they are conservative, compared to 37 percent of Americans over all. (Twenty per cent say they are liberal and 36 percent say moderate.)

Evangelicals and black Protestants are more likely to expect to hear politics preached in church. But both liberals and conservatives (two-thirds of all respondents) said that government should help the poor, and three-fifths favored stricter environmental laws. Three-fifths also said that diplomacy, rather than military power, is the best way to achieve peace. Half of the survey’s respondents said they thought homosexuality should be socially accepted.

Evangelical movement shifting focus
But the GOP may not have as much of a lock on evangelicals as it once did. The movement, as indicated above, is moving beyond the traditional social issues (against abortion and gay rights), to embrace concerns for the needy and the environment.

“Both Democratic presidential contender Barack Obama and his Republican rival John McCain are competing hard for the vote of this ‘battleground faith’ in the November election,” Reuters reported. Of the one-fourth of Americans who are evangelicals, half say they are Republicans and one-third lean toward the Democrats, the report said. In 2004, nearly 80 percent of evangelicals voted for George W. Bush.

“There appears to have been a shift away from the Republican Party even among evangelicals. This trend appears to be concentrated among younger evangelicals,” John Green, a senior fellow at the Pew Forum told Reuters.

The West Coast was the least religious of American regions. And California’s entertainment industry is still seen by many religious people as a threat to the country’s moral standards. Forty-two percent said they feel their values are threatened by Hollywood; 56 percent did not feel threatened.

Most people believe that angels and demons do spiritual work in the world,and 80 percent believe in what they describe as miracles, the report said.

Religion and the standards of science
Despite all of that, there’s a growing sense among many that religion should be held up against the standards of science, and that when that happens, the logic of faith falls away. “The fastest growing faith is no faith at all,” Sean McManus wrote recently in New York magazine. His piece was about four powerhouse authors — Christopher Hitchens, Daniel Dennett, Sam Harris and Richard Dawkins — who are spreading the gospel of atheism. At an Ethical Culture gathering in New York, Dawkins drew applause by quoting Mark Twain on the subject of death: “I do not fear death. I had been dead for billions and billions of years before I was born.”

Then there’s the matter of trying to find God in biological research. The Economist reported recently about the search for a “God particle” in the human body as a way to explain the near universal tendency for people to believe in a higher being. It’s the latest in a growing tendency for science “to poke its nose into the God business,” the magazine said.

“Religion cries out for a biological explanation,” the article said, going on to explain that science now understands the biological reason for language. The next step is to put religion under the microscope as well.

So you think evolution and faith are as incompatible as politics and religion?
By Steve Scott
November 12, 2007