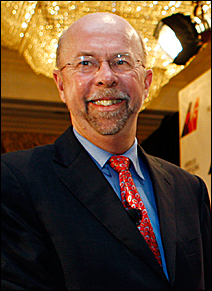 If you think filling your tank is painful these days, try filling a jet plane.

And he urged Congress to reign in speculators who are accused of driving oil prices to record high levels.

“I cannot overstate the importance to my company and the entire U.S. airline industry of immediate congressional action to halt excessive speculation in oil futures markets,” said Steenland, who also chairs the board of directors of the industry’s Air Transport Association.

President Bush and top officials in his administration argue that demand, not runaway speculation, explains soaring oil prices. Many Republicans and market experts blame other factors — including the falling value of the dollar, friction in the Middle East and anticipation that China and India will consume far more energy than their current demand which already is pushing at prices.

Steenland said supply and demand alone do not explain the price increases. Oil prices have more than doubled during the past 12 months while demand increased about 2 percent, he testified before the Energy and Commerce Subcommittee on Oversight and Investigations.

“What has caused this disconnect between prices and supply and demand fundamentals?” Steenland asked. “According to numerous experts, the fundamental difference between the oil market today and the market of a few years ago is the increase in speculative investment in the futures market by financial institutions such as pension funds, investment banks and hedge funds.”

Steenland said that U.S. airlines are on track to spend $61.2 billion on jet fuel this year, $20 billion more than in 2007, and are projected to incur losses totaling close to $10 billion.

Because of a meteoric rise in oil and jet fuel prices, he said, eight airlines have shut down since Christmas, two are in bankruptcy and the major carriers are moving to slash capacity and service after the summer travel season ends.

Demand shock
Like other major energy consumers, airlines have long used commodities markets as a mechanism where buyers and sellers could lock in prices for future purchases and thereby stabilize their operations through volatile periods.

What’s new today is that players who have no interest in the oil itself are trading in the same market, said Michael Masters, portfolio manager of the hedge fund Masters Capital Management. He testified at the same day-long hearing as Steenland.

Unlike the energy crisis of the 1970s, there are no lines at the gas pumps today, Masters said, because “supply is ample.” Logically, skyrocketing prices should have tamped down demand, he said. But it hasn’t, because speculators keep driving it higher.

“What we are experiencing is a demand shock coming from a new category of participant in the commodities futures markets: institutional investors,” Masters said.

Collectively, these new investors behave very differently from the traditional speculators that have always traded in oil markets, he said, and they “are pouring billions of dollars into the commodities futures markets, speculating that commodity prices will increase.”

Sen. Amy Klobuchar, D-Minn., is one of many Congress members who are calling for a crackdown on the speculation. On Monday, Klobuchar outlined her three-step approach.

First, Klobuchar is co-sponsoring legislation that would strengthen the ability of the Commodity Futures Trading Commission to oversee speculators. Second, she has written to U.S. Attorney General Michael Mukasey calling for the Justice Department to set up an oil and gas fraud task force similar to a unit that was created after the Enron scandal. Finally, she called for closing loopholes which exempt electronic trading of energy futures from federal regulation.

Several members of Congress are shaping similar strategies. But they face stiff opposition from other members who favor different remedies such as stepping up oil supplies by ending the moratorium on offshore drilling.

In his testimony, Steenland called for prohibiting pension funds from investing in energy commodities, closing the loopholes Klobuchar described and other changes which would strengthen the oversight and authority of the Commodity Futures Trading Commission.

A webcast of the hearing is available here.