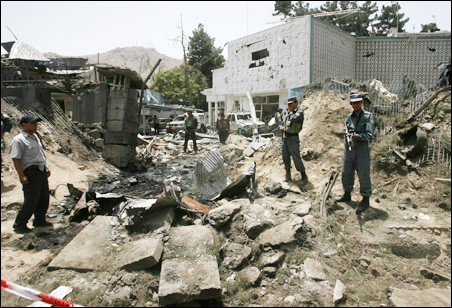 Millions of Americans have puzzled over President Bush’s foreign policy formula: A (Al Qaeda based in Afghanistan) attacks B (United States); therefore B retaliates against C (Iraq).

But now, after a five-year diversion costing thousands of lives and billions of dollars, the Bush administration seems poised to shift its military attention back to Afghanistan and the Taliban extremists who harbored the 9/11 attackers.

Instead of shipping the next rotation of troops to Iraq, the Los Angeles Times reports that the more likely destination is Afghanistan, where insurgents have recently strengthened their positions in the south and east, near the Pakistan border.

The shift’s urgency was punctuated last weekend when the U.S. military in Afghanistan suffered its largest single-day loss of life in three years. Nine soldiers were killed trying to defend a remote outpost near Wanat, in the far northeast. U.S. and Afghan troops were greatly outnumbered by hundreds of attackers who nearly overran the outpost. U.S. and Afghan forces have since abandoned the base and Taliban fighters have occupied the area.

Adm. Mike Mullen, chairman of the Joint Chiefs of Staff, said Wednesday that conditions in Iraq, while still volatile, have settled to the point that some troops can be shifted eastward. Field commanders in Afghanistan have asked for 10,000 additional troops, according to ABC News.

Aside from more strength on the ground, the biggest need is for overhead reconnaissance aircraft to detect fighters streaming into Afghanistan from their safe havens in the mountainous tribal areas of Pakistan, where Osama bin Laden is thought to be hiding.

Policing border remains critical
Gates bluntly criticized Pakistan’s government for failing to pursue and root out the insurgents. “There’s no question that the absence of pressure on the Pakistani side of the border is creating an opportunity for more people to cross the border and to launch attacks,” he said.

Mullen added, “The border there is a really critical issue that we’re going to have to solve — and it has to be solved sooner rather than later.” Whether U.S. troops would pursue insurgents across the border or attempt to attack strongholds in the Pakistani tribal areas is an extremely delicate question that we’ll explore momentarily.

Bush had already authorized a larger military presence in Afghanistan beginning next year, but the need seems suddenly more urgent. With the Iraq troop “surge” ending this month, the first unit scheduled for withdrawal is the 1st Brigade of the Army’s 10th Mountain Division. Another unit, the 2nd Brigade of the Army’s 4th Infantry Division, was scheduled to take its place. The Los Angeles Times suggested that that’s the unit most likely headed for Afghanistan.

Gates said he did not intend to extend combat tours or cut short stateside leaves to accomplish the shift. But he and Mullen are in a tough spot. They don’t want to stretch U.S. forces too thinly. But they don’t want to suffer the kinds of setbacks now in Afghanistan that rocked U.S. occupation forces in Iraq under the hubristic guidance of former defense secretary Donald Rumsfeld.

History revisited
“Must the same catastrophic deterioration occur in Afghanistan before Mr. Bush changes course there, too,” the Dallas Morning News asked in a critical editorial on Wednesday. “Signs of serious trouble are growing. The worst indication isn’t the rising allied casualty toll in Afghanistan but the administration’s state of denial that something is wrong.

“Let’s recall mid-2005, as insurgents rampaged through Iraq in a campaign of death and destruction. Mr. Rumsfeld and Vice President Dick Cheney insisted repeatedly that all was well. Violence, Mr. Cheney said, signified the ‘last throes’ of a dying insurgency.”

The editorial continued, “Make no mistake; these two wars are significantly different, even though the enemy’s tactics are similar. But the Afghan war effort suffered from neglect, caused by Mr. Bush’s decision to divert resources and troops for the 2003 Iraq invasion. It left our NATO allies frustrated. American forces are overstretched and debilitated.

“Mr. Bush faces hard choices as Iraq slowly stabilizes. He must decide whether to bring thousands of troops home for a well-earned rest or redeploy many of them to Afghanistan. The uncomfortable choice — redeployment — is regretfully the right one.

“To convince our NATO allies to boost their commitment in Afghanistan, Washington must first reverse its own pattern of neglect,” the editorial concluded. “Better to start now than to waste crucial months denying shortcomings, minimizing enemy advances and avoiding the inevitable. It’s time to give Afghanistan the priority it deserves.”

The dilemma in Pakistan
The U.S. shift toward Afghanistan in general — and the Pakistan border in particular — was greeted with trepidation in Islamabad, the Pakistani capital. A dispatch in the Urdu-language newspaper Ausaf, monitored by the BBC, said that Adm. Mullen had told the Pakistani military during his recent visit that U.S. forces would take “direct action against Taliban in tribal areas” of Pakistan. The Pakistan government — both civilian and military — “have straight out rejected the U.S. decision and, like the past, reiterated the stance that strict action would be taken against any violation of Pakistani territories,” the paper said. It went on to describe “a chaotic situation in tribal areas” as residents anticipate a foreign invasion.

If that assessment is correct, the U.S. may have called the question in regard to its erstwhile ally, Pakistan, a nuclear power. Either Pakistan gets serious and restores order in its wild and wooly frontier with Afghanistan, or it risks U.S. intervention.  But can any Pakistani government survive that kind of “cooperation” with the U.S.? On the other hand, can it risk sending its army against U.S. forces? Can the country faced with such a dilemma hold together?

One likely impact of siding with the U.S. is that major Pakistani cities would come under terrorist attack from Taliban cells already embedded, the Ausaf story said.

Tensions over anticipated U.S. actions are already running high following the deaths of 11 Pakistani soldiers in a U.S. bombing attack on the border region last month. Despite a joint investigation of the incident, the sides reached opposite conclusions.

NATO commanders, meanwhile, denied reports that its troops are massing near the Pakistani border, although they confirmed that they’ve launched helicopters and artillery shells into Pakistan after coming under rocket attacks from Taliban units.

“U.S. poised to bomb Pakistan,” was a provocative headline posted on the India-based Economic Times website Wednesday. Leaning on British and Pakistani dispatches, the paper quoted a local resident saying, “They started setting up bunkers very close to the border while gunship helicopters are continuously hovering over the border.” The man added that he had never seen such a large deployment of foreign troops near the border. “For us,” he said, “it’s unusual as they are on the zero point.”

Steve Berg, a former Washington, D.C, bureau reporter, national correspondent and editorial writer for the Star Tribune, reports on urban design, transportation and national politics. He can be reached at sberg [at] minnpost [dot] com.

Are U.S. allies pulling their weight in Afghanistan?
By Susan Albright
February 7, 2008

Bombing at supposedly safe Afghan hotel shakes all of us internationals to the core
By Meg Swanson and Steve Swanson
January 31, 2008

Attention shifts back to Afghanistan after bloody year
By Doug Stone
December 19, 2007

Talk of war with Iran on a sweet spring evening
By Sharon Schmickle
May 29, 2008