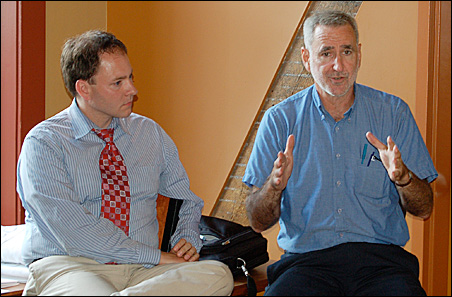 WCCO-TV, for evil purposes that only it knows, invited a few dozen independent bloggers to a Dunn Bros. in downtown Minneapolis to listen last night to likeable ‘CCO reporter/blogger Jason DeRusha and your humble ink-stained wretch talk about our fabulous careers, especially the contrast between working for mainstream traditional news media and blogging.

They called it a “bloginar” (copyright pending on that word, which I take to be a combination of blog and seminar).

DeRusha did most of the talking and was very funny. I tried to shock the audience by ranting against the so-called objectivity paradigm that I believe is a “spent force.” (I stole that phrase from a Canadian journalism professor I heard talk last year.) But, perhaps because they were a bunch of bloggers, the audience wasn’t too shocked.

There was something close to consensus (translation: no one openly disagreed with me when I said this) that the traditional news media are dying, that online media are really cool, both for those who write for it and those who read it, but that so far no one can describe the business model that will enable purveyors of online news to pay a staff of reporters in the adorable way that newspapers did in the previous 35 years of my fabulous career. MinnPost, in case you don’t know, is a noble experiment along those lines.

‘CCO’s online guru, John Daenzer, appears to be trying to organize the bloggers into a small network to collectively sell online advertising, so perhaps that will take care of it. The handout said participants in the network can expect to “generate a target of $1.25 for every thousand impressions on your site,” so perhaps that won’t take care of it.

Everyone in the audience was technologically ahead of me and the gap has only grown since yesterday. ‘CCO rewarded me with a Dunn Bros gift card. I can’t tell how much is on there but it’s more than I was promised.

Eric Black writes about national and state politics, foreign affairs and other topics. He can be reached at eblack [at] minnpost [dot] com.

Blogging and talking about mainstream media