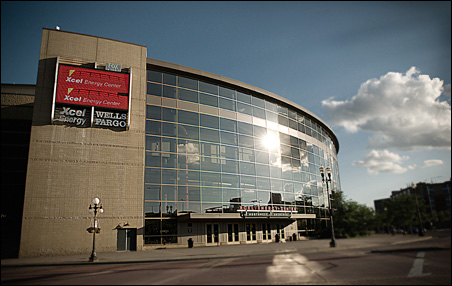 MinnPost photo by Raoul Benavides
Renovation has begun inside Xcel Energy Center to ready the facility for the Republican National Convention.

Everyone has high hopes for the Republican National Convention.

From the offices of the mayors of Minneapolis and St. Paul to a gym in Roseville, where Zubaz sales will be tallied, to the St. Paul Grill, where $525-a-shot scotch is being offered, everybody is thinking of the possibilities.

By now, most have seen the big numbers. Convention planners are predicting 45,000 people directly associated with the convention will come to the region. According to state economists, each of these visitors will spend about $1,600, which works out to $72 million coming into the area.

Additionally, protest organizers hope there will be as many as 50,000 demonstrators showing up for a Sept. 1 anti-administration parade. Economists don’t even try to figure the economic impact they’ll have, though one of the local organizers, Marie Brown, points out that protesters need to eat and sleep, too.

And there’ll be corporations and special interest groups throwing lavish parties at places ranging from the Walker Art Center (Google has rented that space) to the Minneapolis Depot (where something called the AgNite Gala will be staged for 3,000 to 4,000 guests “to celebrate America’s food and agriculture industry”).

Put it all together and the Minnesota Department of Employment and Economic Development says that $148 million in new spending will come to the region, raising $9.2 million in taxes.

Offsetting those gains, however, will be plenty of costs, too, of course, as well as increased traffic and some inconvenience for those living and working in the convention’s shadow. The biggest expense will go for security arrangements, but local officials say they are putting finishing touches on an agreement that will free a $50 million federal grant to cover those costs.

Many dreaming of economic gains big and small
But it’s the smaller economic numbers — and smaller dreams — that intrigue.

Twenty years ago, Roseville bodybuilders Bob Truax and Dan Stock gave an unsuspecting world Zubaz. Much to their surprise, more than $100 million worth of Zubaz pants, which had been designed as comfortable workout wear for weightlifters, were sold before the fad went poof in the mid-1990s.

Sentimentalists that they are, Truax and Stock decided to come out with a 20th-anniversary supply of the pants to be sold on the Internet for $29.

The thought of Zubaz and the Republican National Convention had never crossed their minds. But a few months after the re-introduction of the pants, they got a call from St. Croix Promotions & Retail, the convention’s official retailer. Did Truax and Stock have some of those, ummm, eye-catching Zubaz in red, white and blue for potential product at the convention?

Yes, they did. The Zubaz line was the hit of a springtime fashion show where “official” convention apparel was modeled and now will be sold at RNC sites.

“You tell me,” said Stock. “You’ve seen how people dress for those conventions. Crazy hats, wild suits. Compared to what you see at a convention, I think our product will be considered tasteful.”

More important to the two weightlifters is the fact that with 15,000 media people in town, at least a few TV and newspaper reporters, desperate for off-beat convention stories, will spot the Zubaz and do a story.

Could the unsightly fad again sweep the nation?

For attention-getting devices, how about a $525 shot of scotch
At the other extreme from Zubaz is the classy St. Paul Grill, just a couple of blocks from the convention site at the Xcel Energy Center.  When Macallan Scotch came out with a special 55-year-old single malt last November, David Miller, general manager of the St. Paul Hotel, which houses the Grill, thought of the Republican National Convention and bought four of the 420 bottles that were released. (Only 100 bottles were sold in the United States.)

“We were looking for a way to showcase our scotch selection,” (PDF) said Miller. “What better way?”

The scotch goes for $525 a shot. But there’s a potential bargain for anyone who happens to get the last shot in a bottle: That person gets to keep the bottle, which is Lalique crystal and valued at $750.

But weeks before the convention arrives, Grill customers were going through the scotch at a surprising rate. One customer bought a whole bottle — at $12,500, and others have sipped their way through more than half of a second bottle.

Move from the Grill to the city halls of Minneapolis and St. Paul where the mayors have high hopes of their own.

In Minneapolis, Mayor R.T. Rybak has a vision of selling Minneapolis as a beautiful, high-tech, physically active city.  Reporters, he believes, will be thrilled to find that Minneapolis is the largest Wi-Fi city in the country.

Hizzoner plans to lead visitors on exhausting tours of the city. For starters, there will be “The Mayor’s Triathlon.” Plans have not been completed, but the “tri” will go something like this: There’ll be a walk along the river as one event, a swim in one of the city’s lakes and a run around another of the lakes.

Additionally, each day, Rybak plans to lead convention guests who are staying in Minneapolis on a bike ride to the St. Paul convention site. For the guests, there will be 1,000 bicycles, which are being made available by Humana health insurance and the Bikes Belong Coalition.

“I’m going to make those Republicans sweat,” said Rybak, who has been billed as “America’s most fit mayor.”

This plan also gets convention guests — including members of the media — out of the downtown area and into some of the more scenic spots in the city.

Value of a scenic photograph? Priceless
The value of a photograph or television shot of one of the lakes or Minnehaha Falls is immense, according to Twin Cities marketing guru Dave Mona.

“Few metropolitan areas photograph so beautifully, and you’re never sure what that might lead to,” Mona said. “A person may not even remember the picture, but they’ll be left with a thought that this is a lovely area. Maybe some high school student will remember it and decide to come to school here. Or maybe the head of a company will see it and decide that this would be a good place for a convention.”

Meantime, the less-hyper mayor, St. Paul’s Chris Coleman, has a less-exhausting sort of dream. The dream of the big, positive, unintended consequence.

“A lot of people are coming to this area for the first time,” Coleman said. “We want them to see what a special place this is. We want them to think, ‘Maybe this is the sort of place we want to start a business.’ ”

Coleman learned of the classic example of the unintended bonanza in a conversation with a friend, Grant Merritt, an attorney who was head of the Minnesota Pollution Control Agency from 1971 to 1975.

In 1892, the only other time a political convention was held here, Henry W. Oliver, a Republican delegate from Pittsburgh, came to the Twin Cities via private rail car. A steel man, Oliver went to northern Minnesota following the convention to take a look at iron ore mining being done by Merritt’s grandfather, Alfred, and Alfred’s two brothers, Leonidas and Cassius.

Oliver was so impressed that he signed a lease, calling for the Merritts to mine 600,000 tons of ore over the next two years. In addition, he set up a deal with the Duluth, Mesabi & Northern Railroad, which had been built by the Merritts, to haul the ore.

“Maybe there’ll be another Henry W. Oliver who comes to town,” said the mayor, expressing the high hopes of so many.

GOP convention has NO plans for McCain to duplicate Obama’s stadium speech
By Doug Grow
July 7, 2008

GOP convention may go much greener than party will
By Doug Grow
March 4, 2008

Star Tribune: Getting the Xcel Ready for Anything