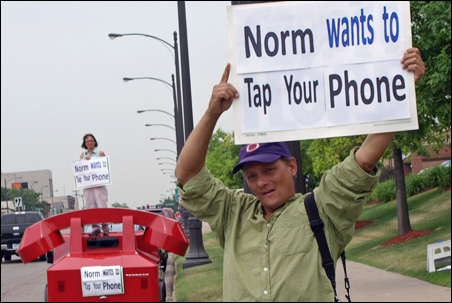 Mary Jane LaVigne climbed atop a red car on University Avenue Monday to trumpet her opposition to a wiretapping bill that is poised for a final vote in the U.S. Senate this week.

“Our constitutional rights are being eroded,” said LaVigne, a writer who lives in Birchwood, from the roof of a touring display car that is shaped like a red telephone.

Others who are upset with the proposed overhaul of the nation’s surveillance laws flooded their senators’ offices with emails and phone calls Monday.

Coleman supports the legislation, his spokesman said. “For the past several months, our nation’s ability to gather intelligence regarding terrorist activity has been hampered due to the failure to pass the bill through Congress. Passage of this bill is critically important, as it will allow our intelligence community to acquire the information they need to keep our country secure while protecting civil liberties,” said LeRoy Coleman, press secretary.

Klobuchar could not be reached Monday, but she has cast a procedural vote on the compromise bill that signals she may vote yes, too.

They are voting on a package of sweeping updates to the Foreign Intelligence Surveillance Act, which was adopted in 1978. The law requires the government to get warrants from a special court if it wants to intercept communications between people it suspects of plotting to harm the United States. In a crisis, the government can listen in on the communications first and get the warrant later.

Much of the nationwide fury over the bill is directed at Sen. Barack Obama, the presumed Democratic presidential nominee, from within his own party.

Obama called the compromise “far from perfect” in a statement published Monday by the Baltimore Sun.

But he said he planned to vote for it anyway.

“In a dangerous world, government must have the authority to collect the intelligence we need to protect the American people. But in a free society, that authority cannot be unlimited,” Obama said.

The compromise, he said, sets up several checks against abuse of the authority beginning with review by a special “FISA court” on any surveillance on Americans.

“Now, I understand why some of you feel differently about the current bill, and I’m happy to take my lumps on this side and elsewhere,” Obama said. “For the truth is that your organizing, your activism and your passion is an important reason why this bill is better than previous versions.”

The presumed Republican nominee, Sen. John McCain of Arizona, also is expected to vote for the bill along with most other GOP senators.

Punish Bush
In the face of heated opposition from Democrats around the country, the House compromised last month on the bill. Proponents say that final version will safeguard individual civil liberties while also helping to protect the nation against terrorist attacks.

But many Democrats want to punish President Bush for conducting a wiretapping program and other surveillance without the warrants current law requires.

They also denounce provisions in the bill that would forgive telecommunications companies for cooperating with the National Security Agency’s now-defunct warrantless wiretapping program in the aftermath of Sept. 11, 2001.

Some companies resisted the government’s call to open private records without the warrants. But several cooperated, and now they face at least 40 lawsuits claiming violation of privacy rights. The bill would allow federal judges to grant the companies immunity from lawsuits for past as well as future cooperation.

Earlier this year, Obama opposed extending retroactive immunity to the companies. In his statement Monday, Obama said he will work with like-minded senators to try striking immunity provisions from the bill.

The new bill would force an administration to use FISA courts which were set up in the aftermath of Watergate and the Vietnam War to obtain individual warrants for any spying on an American citizen. The government would have to show “probable cause” that that person was engaged in terrorist activities or espionage against the United States.

One particularly controversial provision would apply during emergencies, such as in a terrorist attack. It would allow the attorney general and the director of national intelligence to begin a surveillance project without a warrant as long as they seek the court’s approval within seven days.

In the House’s 293-129 vote to pass the bill, Minnesota’s Democratic Reps. Keith Ellison, Jim Oberstar, Tim Walz and Betty McCollum voted no while Democrat Collin Peterson and all of the state’s Republicans voted yes.

From Coleman to Obama, senators feel pressure on wiretapping bill