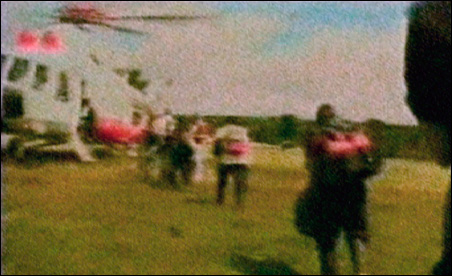 REUTERS
Hostages board a helicopter during the July 2 rescue operation in Colombia.

In a remote clearing, deep in the Amazon jungle, armed rebel guards in green camouflage uniforms surrounded an idling white helicopter. A group of humanitarian aid workers in white shirts watched patiently as a crew bounded 15 hostages with plastic handcuffs and boarded them onto the aircraft, which was to transport them to another rebel location.

Or so the rebels thought.

The International Humanitarian Mission, purportedly a friendly nongovernmental organization that loaned the helicopter for the mission, was actually the invention of Colombia’s Defense Ministry. Military commandos took acting classes to practice their roles, which included various foreign accents, even one identical to Crocodile Dundee.

Once in the air, the soldiers turned the tables on the two rebels aboard the flight, and the hostages were flown to freedom. The news of their movie-script rescue last week spread a wave of relief and celebration around the globe among their friends, families and followers.

Potential ramifications of disguise
As clever as the mission was — and despite its happy ending — the Colombian military’s choice of disguise raises the question of whether the rescue might make life more difficult, or perhaps even more dangerous, for legitimate humanitarian aid workers in the region.

“The answer is absolutely,” said Michael Barnett, a professor who teaches classes on humanitarianism at the University of Minnesota’s Humphrey Institute of Public Affairs. “The moment military begin to impersonate aid workers, you run the risk of putting aid workers in jeopardy.”

Aid organizations like Doctors Without Borders and the International Red Cross work to save lives in some of the most violent places on Earth. Much like journalists in combat zones, the safety and effectiveness of humanitarian workers frequently depend on all participants of a conflict viewing their relief work as impartial, neutral and independent.

That reputation is damaged when humanitarian workers, or, as in this case, simply their image, become entangled with military operations or intelligence gathering. The blurring of lines that results can cast a potentially dangerous suspicion across all aid workers.

Since the rescue in Colombia, this issue has been raised on Internet sites, including an AidWorkers Network forum. “I imagine that the so-called “humanitarian space” for genuine NGOs in Colombia has just shrunk a little bit further,” wrote one blogger.

“My guess is this one incident will probably have some repercussions in Colombia, and diminishing repercussions on out around the world,” said Chic Damback, president of the Washington-based Alliance for Peacebuilding, which seeks nonviolent solutions to world conflicts. Damback also served as a Peace Corps volunteer in Colombia in the 1960s.

The hurdle of gaining trust
Winning the trust of local residents has always been a hurdle for humanitarian workers, particularly in Latin American, Damback said. Especially in that region, the Colombian military’s choice of disguise for last week’s mission is likely to feed into the common suspicion that aid workers are not always who they represent themselves to be.

“We were always accused of being things we weren’t,” Damback said of his time in the Peace Corps. “I stayed as far from the [U.S.] embassy as I possibly could because I did not want anybody in my village to have any reason whatsoever to believe that I might somehow be connected with our foreign policy or military or intelligence operations.”

Doris Rubenstein, a former Peace Corps volunteer who now works as a nonprofit fundraiser in Minneapolis, has similar memories of serving in neighboring Ecuador in the early 1970s.

“I remember my first three weeks or so, people wouldn’t even talk to me,” Rubenstein said. “They were giving me all this hard time. We don’t want to talk to you because if we reveal anything you’re going to tell it to the CIA.”

“As time went by, we gained confidence, and then dear friends,” she said.

After leaving the Peace Corps, Rubenstein worked at the office of the humanitarian aid organization CARE in New York for a decade. Based on her experiences then, she said she can’t imagine that Colombia’s use of mock aid workers would have a serious impact on nongovernmental organizations working in the region.

“The reputation of aid workers amongst the people they work with is so high that this is going to be virtually irrelevant,” she said.

The question of combatants’ reaction
The question, however, is whether the rebel combatants involved will begin to suspect legitimate aid workers of being military moles, Barnett said. The professor isn’t an expert on Latin America, but he said, in general, experience suggests that combatants don’t differentiate much among relief groups.

“Basically, aid agencies are all treated as foreigners. The presumption is that, like all foreigners, they’re going to have their bias and they’re probably aligned with the United States. And so aid workers have to spend a lot of time trying to earn the confidence of the local population. It’s never quite won over,” he said.

The blurring of military and humanitarian missions isn’t a new phenomenon. As far back as the 1960s, military combatants would try to use International Red Cross ambulances as cover for battlefield maneuvers, Barnett said. More recently, the United States has been criticized for its strategy to “win the hearts and minds” in Iraq and Afghanistan. It involves dispatching local reconstruction teams, which include both military operatives to secure the city and civilian workers to distribute food and supplies.

“The inclusion of the military means they’re not only trying to win over the hearts and minds, they’re also gathering intelligence information,” Barnett said. “So they’re not neutral. The consequence then is that when aid workers will come into a village after that, the combatants, the insurgents, the Taliban, will consider them to be part of the enemy, and therefore a viable target.”

Aid workers killed in Afghanistan
That’s what happened in June 2004, when five aid workers traveling in a clearly marked Doctors Without Borders vehicle were ambushed and killed in northwestern Afghanistan. A Taliban spokesman claiming responsibility for the killings asserted that organizations like Doctors Without Borders work for American interests and are therefore targets.

Doctors Without Borders had been operating in Afghanistan for 24 years, since the Soviet invasion of the 1980s. After the killings it closed all of its medical programs in the country. It blamed the U.S.-led coalition for increasing the risk to aid workers in Afghanistan.

“[Doctors Without Borders] denounces the coalition’s attempts to co-opt humanitarian aid and use it to ‘win the hearts and minds.’ By doing so, providing aid is no longer seen as an impartial and neutral act, endangering the lives of humanitarian volunteers and jeopardizing the aid to people in need,” the organization said in a statement in 2004.

In Colombia, Doctors Without Borders maintained a field staff of about 270 people as of a year ago, according to its website. A spokesperson did not return phone calls Wednesday seeking comment on the hostage rescue. Spokespeople for the International Red Cross also did not return phone call and e-mail messages asking about the rescue’s impact. A spokeswoman for Catholic Relief Services said the security of its workers is a top priority but she declined to comment specifically on how the rescue might affect its organization in Colombia.

But it’s not difficult to imagine how the rescue could affect their workers, Barnett said.

“I don’t want to be melodramatic,” Barnett said. “It doesn’t necessarily mean that aid workers are going to get shot. But it does mean that you’re going to have a lot more difficult time getting access to populations at risk. It does mean you’ve got to go through a lot more hoops. It means that you probably have to go through more searches and more background checks.

“It’s not going to make your life any easier.”

Video of Hostages being freed released by Colombian Military