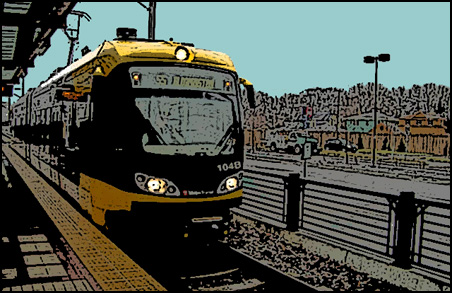 Now that thousands of Twin Cities drivers are responding to high fuel prices by switching to buses and trains, Metro Transit is proposing the next logical step: raising fares because of — you guessed it — high fuel prices.

It’s a dizzying cycle that leaves transportation thinkers chasing their tails and asking a nettlesome question: As commuters finally begin ditching their cars for a cheaper, cleaner and more efficient mode of travel, is this the right time to punish their good behavior? Is this really the right time for a fare increase?

The conventional answer is “yes.”

Despite the revival of rail in the Twin Cities, 88 percent of transit riders still ride buses, and buses burn diesel fuel — lots of it. Metro Transit buses will consume 8 million gallons of biodiesel this year at rising costs that stagger the mind. The agency’s fuel bill will run 65 percent higher this year over last.

But that’s only part of the cash shortage problem. Thanks to a funding decision by the Legislature, about 40 percent of transit operations depend on sales-tax revenues from the sale of cars. With gas prices rising, people are buying fewer cars, and the cars they are buying are smaller and cheaper.

That adds up to falling revenues for transit operations.

Larger deficits projected for coming years
The overall result isn’t surprising. Even after a one-time transfusion of $30 million that the Legislature included in last February’s big new transportation package, Metro Transit’s operating budget will run $15 million short this year, with larger deficits of $42 million and $30 million projected for 2009 and 2010.

The agency is clearly in a bind. It could cut service. But cutting service just as riders are demanding more of it makes no sense and flies in the face of the Met Council’s goal of doubling bus ridership by 2030. Borrowing money for ongoing expenses is out of the question.

So, Metro Transit has settled on seeking a basic fare hike of 25 cents beginning in October — and as much as 50 cents more next year if fuel prices continue to climb. The agency’s parent, the Metropolitan Council, will vote on the fare hike after a series of eight public hearings now under way.

There’s also an unconventional answer to the fare hike question. It’s “no.” Raising fares, say critics, would push some riders back into their cars and slow down transit’s impressive growth rate just when more riders and more buses and trains are most needed. They ask: What kind of lunatic policy is that?

On Wednesday, Minneapolis Mayor R.T. Rybak spoke out against the fare-hike proposal during a public hearing at City Hall.

‘Historic opportunity’
“At a time of skyrocketing gas prices, traffic congestion and global warming, we have an historic opportunity to dramatically improve and increase transit use,” he said. “At this rare moment we have the opportunity to make the single greatest shift in transportation patterns in a generation. We should seize this opportunity, not ignore it. …

“Fare increases discourage transit ridership, pure and simple, and Metro Transit should delay this increase and explore other options to balance their budget.”

Among the options: Metro Transit has a rainy-day fund of $19 million. Perhaps the agency could dip into that fund to shore up the deficit until the Legislature can find a stronger financial footing for transit operations.

“This is a temporary problem that doesn’t have to be solved on the backs of the riders,” said Jim Erkel, transportation director for the Minnesota Center for Environmental Advocacy. When gasoline costs soared, drivers were not asked to pay gas taxes that were 40 cents higher to cover the entire cost.

Erkel advocates a legislative fix and a temporary dip into the rainy-day fund.

“If this isn’t a rainy day, I don’t know what is,” David Greene of the religious organization ISAIAH said in testimony at a public hearing Tuesday night in Hopkins.

Cheaper to drive?
Another rider, Luke Francl of Minneapolis, said the pending fare increases would make it cheaper for him to drive to his job in Hopkins. “This isn’t going to help people to get off the roads,” he said.

Indeed, higher fares will tighten the grip of what Jeff Hazen of Bloomington called “our transportation monoculture.” The thing to do, he said, is not raise fares but expand alternatives to the auto.

That was the tone of the Hopkins meeting — that and the point made by some heart-wrenching testimony that the disabled and poor will be hit hardest by higher fares.

There’s the counterpoint, of course. It’s that everyone has to share the pain of higher fuel prices, including transit riders. That’s pretty much what Arlene McCarthy, the Met Council’s chief transportation planner, told me before the meeting began.

Metro Transit spending more for the same ride
“Everyone is affected by high fuel prices, and the bottom line is that it’s costing us more to deliver the same ride,” she said. Fares, which normally cover about one-third of operating costs, have now dipped down toward one-quarter. Her point is that riders have to pull a bigger load.

How big? Surely, I said, they won’t be expected to cover the huge operating deficits projected for the out-years.

She agreed that some of the operations problem is structural and must be left for the Legislature to fix.

With the aid of hindsight, it does seem foolish for the Legislature to have made transit operations dependent on auto sales. In an energy crisis, one would expect auto sales to decline as transit demand rises. It was a funding crunch waiting to happen. It’s especially ironic that transit would be battered by the decline of the SUV.

Ideas include tax for off-street parking
“There a lot of irony to all of this,” said Barb Thoman of the lobbying group Transit for Livable Communities. The organization has suggested on its web site a number of alternatives to the fare increase, including a new tax on off-street parking. “Free” parking is one of those hidden subsidies that makes driving seem cheaper than it actually is.

There are many such hidden subsidies that encourage driving. It’s not well known, for example, that one-third of local property-tax revenues go toward building and maintaining roads.

Indeed, the economy embeds a massive support system for cars. The costs of insurance, a highway patrol, hospital trauma units and a foreign policy that dictates the fighting of wars in oil-rich lands are generally not counted as a cost of auto dependence. Providing a more balanced transportation structure, one that gives similar advantage to transit and other modes, is a huge policy challenge.

The question here and now is this: Does it make sense to raise fares and discourage ridership when political leaders on both sides of the aisle say government policy should be to encourage alternatives to excessive driving and gasoline consumption, to mitigate climate change and to lessen our dependence on unstable foreign energy supplies?

TRANSIT RIDES PROVIDED IN TWIN CITIES BY ALL AGENCIES, 2007
89.3 million

*During 2009, another 50-cent hike could be added if fuel costs continue to rise.

“Doing The Math On Rate Hike For Metro Transit”
WCCO