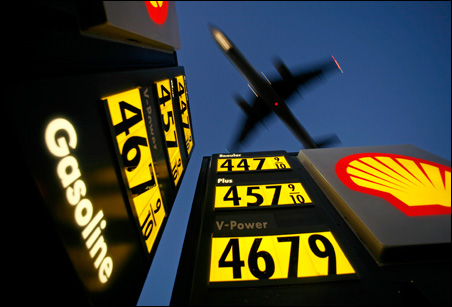 REUTERS/Mike Blake
One reason fuel prices are so high in the U.S., such as at this gas station near San Diego’s Lindbergh Field, is that other nations subsidize prices.

Among the many barriers to U.S. economic recovery are these two: high energy prices and hard-to-get loans for homes and businesses.

Each barrier has its roots in the excesses of economic trends once considered universally beneficial, namely the interdependence of global economies (globalization) and the assumption that markets regulate themselves. But as it turned out, free markets weren’t so free after all (certainly not oil markets) and the self-interested actions of a few (let’s call them creative lenders) did not benefit the many.

Setting a new course on these issues — toward energy self-reliance and tougher regulation of the financial markets — would steer the nation away from some of the ideological assumptions that gained a foothold with Ronald Reagan’s election in 1980.

Recent press reports capture examples of current problems and some commentary on solutions: a New York Times story on banks cutting back  sharply on loans even to healthy companies hoping to expand and hire; another Times piece on how foreign governments buy down the cost of motor fuel thereby spurring demand and pushing market prices higher; a Wall Street Journal article that’s nominally about Chrysler but really about the convergence of the energy and credit crises; another Journal piece on the success of luxury goods in the midst of bad times, and two Times commentaries on these topics.

The credit crunch
Let’s start with banks depriving healthy companies of the money they need for expansion and hiring. The amount of commercial and industrial loans — including short-term “commercial paper” — dropped by $150 billion over the last year, according to Federal Reserve data, the Times said. That’s the largest annual decline since the credit crunch began in 2001, and it more than offsets the total value of tax rebates sent to households this year, rebates that were supposed to stimulate the economy.

The loan tightening comes “as joblessness grows and consumers pull back from spending in the face of high gas prices, plummeting home values and mounting debt,” the Times noted. The paper offered the example of a profitable Baltimore company with a good credit history being refused an expansion loan by a bank that, just months ago, was aggressively hawking its loans.

“The second half of the year is shot,” Michael Darda, chief economist at the trading firm MKM Partners told the Times. Until recently Darda was optimistic that the economy would continue expanding. “Access to capital and credit is essential to growth. If that access is restrained or blocked, the economic system takes a hit,” he said.

Other nations subsidize fuel prices
In a second story, the Times dissected the practice of some foreign governments to subsidize the price of motor fuel. To understand why U.S. fuel prices have soared, it helps to consider the captain of a battered freighter anchored in Indonesia. He pays just $2.30 a gallon for diesel, the same price regular drivers pay for gas, the story said, noting that governments from Mexico to India to China heavily subsidize energy prices as a way to prevent inflation and to keep civil and political order.

The oil company BP estimates that countries with subsidies accounted for 96 percent of the world’s increase in oil use last year — a trend that encouraged consumption and helped drive prices to record levels. Conversely, oil demand fell in countries — like the U.S. — where prices were allowed to rise.

China has paid $40 billion in subsidies this year compared to $22 million last year, both in an attempt to undercut rising world prices and keep pace with its domestic demand. Malaysia, before adjusting prices recently, was spending 7.5 percent of its domestic output on subsidizing oil prices. When Indonesia adjusted subsidies last month so that prices rose 40 percent, there was unrest in the streets and the prime minister announced he would retire early, in 2010.

Nobuo Tanaka, executive director of the International Energy Agency, told the Times that subsidies were a big factor in the supply-demand mismatch helping to push up oil prices. “We think the price mechanism is not working enough to make consumers more efficient,” he said.

Meanwhile, trouble in the energy and lending sectors prompted a story in the Wall Street Journal that began: “In a sign that the woes afflicting Detroit and Wall Street are starting to feed on one another, Chrysler LLC said Friday it will no longer offer auto leases through its lending arm, a move that could further crimp the car maker’s sales.”

High gas prices have dampened the demand for SUVs that were often sold by the automaker after leases expired. As a result, leases now pose a big risk for car companies. “The big three automakers and their financing units have been piling up increasing losses in recent quarters stemming from leases mainly as a result of falling resale values on trucks and sports-utility vehicles leased a few years ago,” the Journal reported.

Despite all of that, many luxury items are selling well, considering the shape of the economy, the Journal reported in another piece. One interpretation is that luxury items have “broadened their reach beyond the upper crust and into the growing ranks of the affluent,” as the Journal notes. Another take would be that these upper classes have separated from the rest of the economy to a degree that insulates them from economic reality.

Among brands weathering the storm are Hermes, Omega, Cartier, Bulgari, Burberry, Saks Fifth Avenue and Louis Vuitton. One reason is that these and other brands have broadened their appeal by introducing entry-level products. Another is that upper-middle Americans are traveling less abroad and buying expensive watches and scarves at home. Still another is that foreign tourists are buying these items in the U.S. because of the cheap dollar.

Plenty of fixes suggested
Fixing the high-gas, tight-credit problem has inspired all manner of suggestions, as might be expected in an election year. On gas prices, the Times said in an editorial: “Like some of the other ‘cures,’ offering to solve Americans’ energy woes by drilling or slapping Wall Street around merely feeds the myth that there is a quick and easy solution out there. There isn’t. Expensive oil is likely here to stay.

Americans must burn less oil and find alternative sources of energy that do far less damage to the environment.”

On the financial market problem, Times op-ed columnist Paul Krugman offered a short-hand explanation, then a solution. “Far from being disciplined [as promised by free market advocates] lenders went wild. Concerns about the ability of borrowers to repay were waved aside; so were questions about whether soaring house prices made sense.

“Lenders ignored the warning signs because they were part of a system built around the principle of heads I win, tails someone else loses. Mortgage originators didn’t worry about the solvency of borrowers, because they quickly sold off the loans they made, generally to investors who had no idea what they were buying. Throughout the financial industry, executives received huge bonuses when they seemed to be earning big profits, but didn’t have to give the money back when those profits turned into even bigger losses.

“…The moral of this story seems clear,” Krugman concluded. “Financial regulation needs to be extended to cover a much wider range of institutions. Basically, the financial framework created in the 1930s, which brought generations of relative stability, needs to be updated to 21st-century conditions.”

Both presidential candidates were critical. Democrat Barack Obama said John McCain’s promise to extend Bush’s tax cuts for the wealthiest Americans would do further harm to the nation’s balance sheet. As president, McCain’s policies would “continue the same Bush economic policies that put our economy on this dangerous path,” he said.

McCain blamed Congress’s lack of discipline while citing his own “unmatched record in fighting wasteful earmarks and unnecessary spending.”

Steve Berg reports on urban design, transportation and national politics. He can be reached at sberg [at] minnpost [dot] com.

Mortgage giants in crisis — yet the public seems locked in ‘whatever’ mode
By Sharon Schmickle
July 14, 2008

Is something wrong with the economy, or is it just our imagination at work?
By Steve Berg
July 11, 2008

What to make of the recession question
By Steve Berg
November 9, 2007