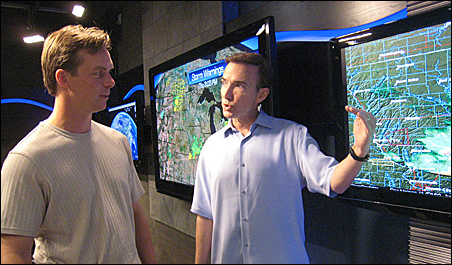 Sitting in the sunny corner office of his new digs in Excelsior, Paul Douglas, 50, appears to be as relaxed as the light blue short-sleeved shirt and faded blue jeans he’s wearing. He peers over a pair of readers at one of two computers — a laptop and a flat screen — on the desk in front of him, where there is also an assortment of neatly arranged framed photos.

The walls in his office are painted the color of roasted cashews, and behind him hangs a framed poster from the film “Twister.” On another wall next to a large window is a black-and-white photo of Douglas and Hollywood director Steven Spielberg. In the films “Twister” and “Jurassic Park,” Spielberg used weather graphics that Douglas created in the early 1990s with his first entrepreneurial venture, EarthWatch.

“I remember him telling me that he dreamed about [EarthWatch],” said Douglas’ 20-year-old son, Walt Kruhoeffer, who interns with his father — and, as one of my relatives might say, is the spittin’ image of his dad (whose real name is Douglas Kruhoeffer). “He said he had a dream like he was flying under a hurricane.”

And it seems that, just months after enduring a career nightmare, meteorologist Paul Douglas is still dreaming — and creating.

In less than 90 days after being laid off by WCCO as part of mandated corporatewide cutbacks at CBS, Douglas has turned a daydream into reality.

“I remember sitting at WCCO saying, ‘You know, I use this equipment on the air for nine minutes a day,’ ” he said. ‘The rest of the time it’s collecting dust. In a perfect world instead of doing three shows a day, I’d be doing 40 shows a day for different markets for different needs.’ “

Which is precisely what Douglas and a small team of meteorologists aim to do with the syndicated weather service called WeatherNation, which launched last month.

“I almost launched this back in 1982 at WNEP-TV in Wilkes-Barre, Pennsylvania,” he said, emphasizing each call letter. “It would have cost between $5- and $7 million, relying on a backyard of satellite uplinks and transponder time, and at the time we thought it was just too expensive. Since then the cost of everything has come down.”

Now, instead of $5 or $6 million, Douglas has spent just a million — so far — on cutting-edge weather forecasting technology. WeatherNation’s 2,700-square-foot office features a 26-by-17-foot television studio equipped with half a dozen HD monitors, including a 65-inch high-definition plasma screen. There are ever-changing LED lights on black walls with metallic grates, and the floor tile looks like brushed gunmetal. It kind of reminds me of one of those control rooms in an espionage thriller film: dark and mysterious and filled with all sorts of high-tech bells and whistles.

And the amazing thing is, none of this existed three months ago.

“The silver lining [to being laid off from his TV gig] is that it allowed me to dive into the deep end faster with Todd and not dwell on the past but focus on the future,” he said. Todd Frostad is his business partner, who has done well enough in tech-start-up companies and real-estate development to be able to retire early — at age 39.

Douglas met Frostad just a few months ago while looking for office space. He ended up setting up shop in a new office complex owned by Frostad and the two hit it off.

Frostad is not only a partner in WeatherNation, he is also CEO of another one of Doulgas’ projects, Singular Logic, a non-weather-related Internet start-up that allows customers to choose the ads they see online.

“After my 50th Cialis ad,” says Douglas, “I remember turning to someone and saying, ‘Duh, there has got to be a better way.’ “

“Doug is the CEO of WeatherNation and is taking a day-to-day, hour-to-hour approach to develop the product that is WeatherNation,” Frostad explains. “In the inverse I’m doing the same thing for developing the product for Singular Logic. I’m creating the vision on that side. So we take opposite roles on the two companies, but we are partners in both.”

Life after TV
I connected with Douglas last April via e-mail, just days after he had been laid off. This time we talked face to face. And it’s obvious Paul Douglas hasn’t wasted any time getting on with life after TV.

“The past couple of months have been a lot like attending your own funeral,” he said. “People say ‘we miss you’ — not everybody, I’m sure some people are relieved — but some people come up and say ‘Yeah, we miss you. Are you going to come back?’ ‘Are you going to work for a TV station?’ And it’s very flattering — and the short answer is no, not in the conventional sense where I take my lunch bucket off to a local TV station, show up and punch the clock. But I would love to be able to do something for one of the local television stations on their website, possibly on air. I’m certainly free and clear to do that.

MinnPost: Have you talked to anybody in town?

Paul Douglas: “We’re starting to have those conversations. Nothing I can announce today, but the phone has rung. We’ll see.  Getting back on the air locally, if it happens, great. If not, I’ll be OK.

MP: It’s been almost three months since you were laid off. Does it still sting a bit?

PD: You know it’s fading; you know, it’s history and I’m not bitter. If it was a business decision and they were trying to save money, I get that. But it could have been handled more gracefully.

MP: Have you heard from any of your buddies over at ‘CCO?

PD: Oh yeah, I’m in touch with [news anchors] Frank and Amelia and Dennis and Jeannette and Don. They’re still good buddies. I miss seeing them. I tell people, and it’s the truth, I miss interacting with my friends at the station. Do I miss being in that environment where every day the margins have come down and there is more pressure to cut cost? No, I don’t miss that at all.”

He pauses, then adds, “I want to believe, Roxane, things happen for a reason.”