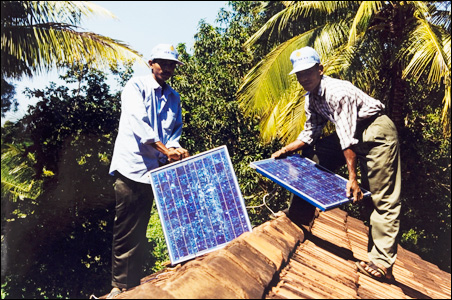 Copyright SELCO-India
Solar panels are installed on a rural home in Sri Lanka.

There’s a revolution in the world of design. Certainly, star architects like Frenchman Jean Nouvel and Rem Koolhaas of the Netherlands experiment with mind-bending forms and Californian  Frank Gehry designs his silvery sculptures for yet another country, but another strain of architects and designers has focused on innovating for more basic needs: housing, clean water, health, education, sanitation and transportation for people around the world.

An exhibit at the Walker Art Center called “Design for the Other 90%” displays a raft of these innovations. Organized by the Cooper-Hewitt, National Design Museum in New York, the display is housed in a little village of white structures in the Minneapolis Sculpture Garden. Bend your head to get through the low doors and you’ll find some 30 objects that range from low to high tech, from a straw that purifies drinking water to laptops for kids in underdeveloped countries. (The exhibit runs through Sept. 7.)

Though none of these objects is Minnesota-designed, the Twin Cities area has become a hub of humanitarian design efforts, which the Walker will showcase this Thursday evening (July 31). Curated by two young architects, Colin Kloecker and Troy Gallas, the “Solutions for the Other 90%” panel will include brief visual presentations by Twin Cities-based groups such as Architecture for Humanity and NEED magazine. (See related content.)

The other 90 percent, of course, is the vast majority of the world’s 6.5 billion people who lack access to basics such as food and water.

“Architects have to take responsibility for more than the 2 to 3 percent of the world’s population who can afford to hire them,” said Tom Fisher, dean of the University of Minnesota’s College of Design, which has done work for UNESCO, in Istanbul, Turkey, and on the Gulf Coast.

The goal of the Cooper-Hewitt exhibit was to show how design can alleviate some of the world’s thorniest problems — and do so inexpensively.

Inexpensive solutions to thorny problems
How, for instance, can a girl in Nigeria keep her tomatoes cool enough to reach market days or weeks after they’re picked? Put one earthenware pot in a larger pot, pour sand in-between and water it, and the tomatoes stored there will last twice as long as in a single pot. The Pot-in-Pot cooler was designed by Nigerian Mohammed Bah Abba.

How can malaria, the biggest killer of children in Africa, be prevented? Use a mosquito net impregnated with insecticide. The PermaNet, designed by the Swiss firm Vestergaard Frandsen, kills or repels mosquitoes for up to four years, even after washings. Torben Vestergaard Frandsen also designed the LifeStraw, the incredibly simple 10-inch-long polystyrene straw that filters water in the same way as those portable water filters used for Boundary Waters camping trips. 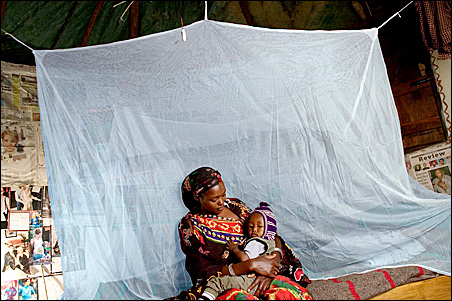 Copyright 2005 Palle Pete Skov
PermaNet kills or repels mosquitos for up to four years, helping to prevent the spread of malaria in Africa.

How can water be pumped for irrigating crops when there’s no electricity? Use the bamboo treadle pump, a human-powered pump that looks like a rustic Stairmaster. Made of metal, plastic and bamboo, it can be manufactured in small local workshops and boost production without a huge investment.

How can water be transported by women and children without causing the neck and spine stress produced by carrying water on their heads? Put it in a Q drum, a doughnut-shaped plastic wheel that is easy, even fun, to pull.

How can a doctor in Boston help diagnose medical problems in remote Cambodia? A visiting nurse who travels six hours to villages can transmit digital photographs and information via solar-powered computers to Boston doctors, who respond within hours. In a variation on the theme, the Internet Village Motoman Network sends drivers on Honda motorcycles equipped with satellite uplinks through the countryside to collect emailed questions and communications from schools, telemedicine clinics and a government office. Drivers then return to civilization to get the questions answered and turn around and drive back to upload the information received. It’s not in real-time but it works. 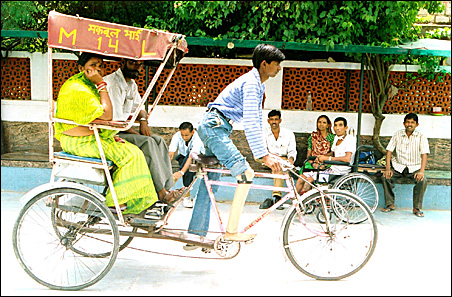 Other innovations, some devised by locals and some by international organizations, include high-density briquettes made from non-polluting sugarcane charcoal, bicycles simply retrofitted to carry large and unwieldy loads, and a foot-and-below-knee prosthesis so amputees who’ve lost limbs to land mines can still make a living pedaling bicycle taxis. So far, 900,000 are in use.

Though these objects are not necessarily beautiful or even interesting to look at, the stories behind them are uplifting. While you poke through the white cardboard shelters holding the exhibit, be sure to take in the video that explains the items. Other videos in the Walker Bazinet Lobby (the one on Vineland Place) further expand on the ideas presented in the exhibit. (The exhibit catalog available in the bookstore for $20 is also a valuable resource.)

These days, global problems seem to generate only bad news. “Design for the Other 90%” showcases the other, hopeful side of the coin.

Linda Mack writes about architecture and design for MinnPost.com. She can be reached at lmack [at] minnpost [dot] com.

On the local front

In 1999, a 20-something British architect named Cameron Sinclair and his partner Kate Stohr started a nonprofit called Architecture for Humanity. It aimed to harness the volunteer talent of architects to assist in humanitarian crises such as the South Asian tsunami and Hurricane Katrina.

Sinclair’s modus operandi: Invite architects to submit designs for a real-world project, engage the local people in choosing the most appropriate one, and get it built. AFH, as it is known, has been wildly successful. Thousands of architects have been involved in projects that include mobile AIDS clinics in Africa and housing on the Gulf Coast.  The white structures housing the Walker exhibit, for instance, are Global Village Shelters commissioned by Architecture for Humanity for use in Grenada after Hurricanes Ivan and Emily. (For an inspiring AFH overview, see the 2005 book “Design Like You Give a Damn.”)

In 2005, Sinclair taught at the University of Minnesota College of Architecture and Landscape Architecture, and revved up scores of students and architects to join what is without doubt a movement. Even before his class, the local chapter of Architecture for Humanity had designed a community center for Sri Lanka that has since been built. Inspired by that project and other good things they saw happening around them, Colin Kloecker and Troy Gallas, CALA graduates and members of that chapter, formed an offshoot called Solutions Twin Cities.

“You can find out about things going on in Europe or Asia but then you turn your computer off and it’s gone,” said Gallas. “We wanted to find out what’s going on here that people can participate in without taking a year off to volunteer.”

The information on the website — links to projects and people — is combined with twice-a-year evening gatherings that have attracted more than 250 people.

Kloecker said, “We want to bring the people and their ideas together.”

• Tom Fisher, dean of the U’s College of Design, which is known internationally for its focus on humanitarian design

• Stephanie and Kelly Kinnunen, Northeast Minneapolis-based publishers of NEED magazine, whose motto is, “We are not out to save the world, but to tell the stories of those who are.”

• 612 Authentic, which produces short documentary films (for MinnPost.com among others) about extraordinary ordinary people in the Twin Cities

• Peter Rich of the Microfinance Alliance, a local think tank that researches how to finance humanitarian pursuits

Fisher sees this “other 90 percent” focus transforming the profession. “In the next decade there may be a whole profession of public service architects — the counterpart of public health professionals,” he said. “That’s where the new, huge opportunities for growth will come.” — Linda Mack