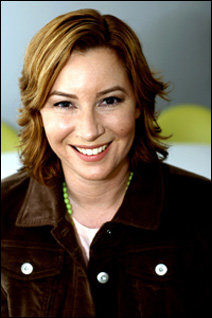 If there’s one thing that likely distinguished Grammar Girl‘s Minneapolis stop from the rest of her national book tour, it’s the prolonged discussion about reconciling Minnesota Nice with Fastidious Grammarian. Being precise but not persnickety.

Last night’s audience, by and large, appeared to know their grammar. The vast majority indicated familiarity with Schoolhouse Rock, which prompted Grammar Girl to deem the crowd of 50 a “good audience.” Few had grammatical questions. What they didn’t know was how to correct the linguistic errors of their friends, relatives and colleagues.

Mignon Fogarty can relate to their quandary: The 40-something technical writer from Reno, Nev., has made a point to dispense friendly language advice in her top-ranked podcast. Being saucy and agitated, in the spirit of Lynne Truss, is not her style. Rather, USA Today says, Fogarty is “authoritative but warm. Kind of like the sixth-grade teacher you wish you had.”

So when a tan, bespectacled woman in the second row asked about mentioning a “fairly major semicolon problem” in the cover letter of a student she had hired, Fogarty readily offered a tactful response, bookended in praise. Remember, Grammar Girl said, you’d be doing the student “a favor” by bringing up the grammatical blunder.

“I’d want to know,” chimed in a petite brunette wedged in a side row.

A middle-aged woman inquired about a friend’s “beautiful poem” that used “further” rather than “farther,” which denotes measurable distances. Was she obliged to point it out? Could poetic license override this mistake? (Yes, Fogarty said, much to the woman’s relief.)

Delicate inquiries
Then there was Emily Hunter, 23, a pretty marketing intern from Woodbury who pre-ordered “Grammar Girl’s Quick and Dirty Tips for Better Writing” on Amazon for her family members. Getting the books signed provided her with a good excuse to give them the books, Hunter told Fogarty, who smiled, saying, “a little passive-aggressive gift.” 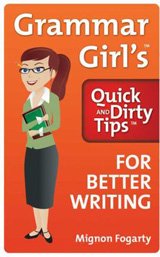 Then there was the bold question I laced with a humble preface. “Tell me,” I said, as we walked out of Magers & Quinn, “because I’m still learning.” And then I asked Fogarty about a line on her book’s back cover, which reads: “Written with the same wit, warmth, and accessibility that draws people to the podcasts, Grammar Girl’s Quick and Dirty Tips for Better Writing covers grammar conundrums that can confound even the best writers.”

My question: why draws, a singular verb, for a plural subject (wit, warmth, and accessibility)?

“Hm.” Fogarty examined the sentence, explaining that the verb worked because each subject was singular. Then a portly, bearded man said “draws” would be OK if the subjects were separated by “or,” but that with “and” it should be “draw.”

He was from Lake Geneva, Wis.

• To meet the demand, Fogarty recently increased the frequency of her podcast from weekly to semiweekly.

• She is pleasantly surprised by the cross section of her fans. The largest demographic, according to a listener survey, is 25 to 45.

• Having created the podcast for two years now, she’s not “running out” of ideas, but rather, “running deeper.” (Translation: She’s defining grammar more broadly and using guest writers to bring in fresh approaches.)

• The other podcasts in The Quick and Dirty Network she founded do well “for their categories,” but the grammar podcast, ranked No. 1 by iTunes, leads by a long shot.

1. “Common Errors in English Usage” by P. Brians
2. “The Chicago Manual of Style”
3. “Garner’s Modern American Usage” by B. Garner
4. “The Associated Press Stylebook and Libel Manual”
5. “Punctuate It Right!” by H. Shaw