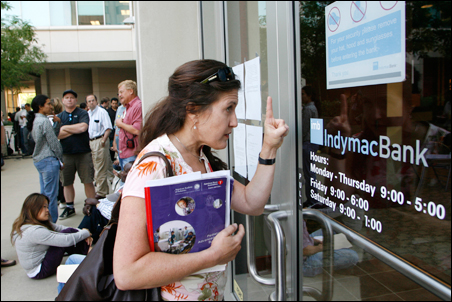 Nurse Lynne Levin-Guzman, who has an account at the failed IndyMac Bank, tries to get someone’s attention inside a branch in Pasadena this week.

In an already topsy-turvy summer of economic signals, Wednesday proved an especially up and down day — or, more precisely, down and up. President Bush had felt the need on Tuesday to remind nervous savers — in light of Californians spending hours queued outside failed IndyMac banks in long, hot lines — that their first $100,000 in deposits are insured. Federal Reserve Chairman Ben Bernanke had to juggle the Freddie & Fannie crisis with another trip up the Hill on Wednesday to explain the Fed’s thinking on inflation — which, a new report said, had eaten 5 percent of Americans’ money in the past 12 months.

By late in the day, oil prices — which had been falling since Tuesday — had dropped enough to help boost stocks (Wells Fargo helped, too, with a reassuring decision to raise its dividend), and a foreign-policy development had a salutary effect as well.

Still, it’s not the kind of roller coaster anyone wants to ride. Our Misery Index (the sum of the unemployment and inflation rates) is at its highest level since Bill Clinton took office in 1993. What to make of it all?

“Bleak economic news has been building over the last few weeks, in particular with the renewed concerns over the American banking and mortgage industry,” writes Jad Mouawad in today’s New York Times. “At the same time, some of the geopolitical tensions that surrounded the move of oil prices toward $150 a barrel … showed some signs of easing.

Senior diplomat will attend Iran talks
“The Bush administration said on Tuesday that it would allow a senior diplomat to attend a meeting of European and Iranian negotiators over Iran’s nuclear program, in what would be the highest-level talks between American and Iranian representatives since 1979. Fears of a military strike by Israel or the United States on Iran’s nuclear operations helped push oil prices to record highs last week.

” ‘Things have been looking rather glum over the past couple of days,’ said John Kilduff, an energy analyst at MF Global. He called the news about talks with Iran and the unexpected increase in oil inventories ‘a one-two punch for bears’ that could signal a deeper drop in prices in coming weeks.”

The Times said most analysts “expect global oil demand to slow this year and next. OPEC on Tuesday cut its forecast for the growth in oil consumption next year by 100,000 barrels a day to 900,000 barrels a day. The oil cartel suggested that prices might also ease as more supplies come on the market.

“The decline in demand for OPEC crude combined with increasing OPEC capacity should further ease market conditions and likely help moderate prices, the report said. Whether the market will fully benefit from the softening fundamentals will depend on other factors such as geopolitical tensions, financial markets developments and downstream constraints.”

Bernanke paints a gloomier picture
Though the prospect of moderated prices took some of the edge off the alarming inflation news, Fed chairman Ben Bernanke’s message was fairly bleak.

“On the second day of two days of congressional testimony,” Reuters reported, “the Fed chairman painted a gloomier economic picture than in recent weeks, suggesting the U.S. central bank is unlikely to raise benchmark rates from the current 2 percent at its next meeting on August 5. Underscoring the recent economic deterioration, minutes of the Fed’s last meeting on June 24-25, released on Wednesday, showed officials thought at the time they might be able to begin raising benchmark interest rates from 2 percent as soon as August.

“For the second day in a row, Bernanke sought to convince sometimes skeptical members of Congress to send a strong signal to financial markets that the U.S. government stands behind embattled mortgage finance companies Fannie Mae and Freddie Mac by approving a backstop package proposed on Sunday.”

Meanwhile, the Fed’s recent crisis-management activities are themselves raising a few eyebrows, as Neil Irwin reports in today’s Washington Post — reminding readers that “last weekend, Bernanke offered Fed lending to the housing finance companies Fannie Mae and Freddie Mac and did not resist in gaining a new role for the Fed in setting those firms’ capital requirements. In March, the Fed engineered the buyout of Bear Stearns and offered emergency lending to all investment banks.”

‘A sort of all-purpose guarantor’
“The sprawling financial and economic crisis is leading to expansion of the Federal Reserve’s ‘s role, increasingly turning the central bank into a sort of all-purpose guarantor of the financial system,” Irwin wrote. “In the past few months, Fed Chairman Ben Bernanke has burst through long-standing boundaries on what the Fed does. Bernanke’s actions — many taken reluctantly — have repeatedly pulled the world from the brink of financial catastrophe and have won praise from Wall Street and Capitol Hill.

“But as it gains a broader portfolio of responsibilities and expectations, the Fed risks losing its focus on managing the nation’s monetary policy, say some who study the institution. And it even could create risks to the central bank’s credibility and its fiercely guarded independence.

” ‘The Federal Reserve has re-created itself,’ said Vincent Reinhart, a senior staffer at the Fed until last summer who is now a resident scholar at the American Enterprise Institute.  ‘And if you do more things, you set yourself up to have to choose among them and trade off. What happens when concern for housing finance conflicts with the need to pursue price stability?’ ”

Both crises have garnered headlines this week, but it was the inflation report that captured much of the attention Wednesday — along with fresh figures on wages and joblessness.

A high Misery Index
As Timothy Homan at Bloomberg.com put it, “Misery hasn’t had this much company in more than 15 years.”

He explained: “The jump in consumer prices reported today by the Labor Department means the so-called Misery Index, the sum of the unemployment and inflation rates, is the highest since President Bill Clinton took office in January 1993.

“The measure … rose to 10.5 in June from 9.7 in the prior month. Surging costs and falling payrolls will cause consumers to slow spending growth to the weakest pace since 1991 by the fourth quarter, according to a monthly survey of economists by Bloomberg News. The figures underscore Federal Reserve Chairman Ben S. Bernanke’s comment to lawmakers yesterday that U.S. households are under ‘tremendous pressure.’ “

Homan quoted Robert Dye, senior economist at PNC Financial Services Group Inc. in Pittsburgh, as commenting, “You add that to what’s going on with home prices and that’s just a huge stress on consumers.”

“There’s not enough lipstick to put on this pig,” Richard Moody, an economist at Mission Residential, wrote in a note to clients,  the New York Times reported. “No matter how one slices and dices, the bottom line is that U.S. workers are falling farther and farther behind.”

Will oil prices continue to drop and avert a long period of stagflation? Americans have little choice but to keep riding the roller coaster — hoping the next bend won’t throw us out of the car, and that more uphills and high plateaus are to come.

Mortgage giants in crisis — yet the public seems locked in ‘whatever’ mode
By Sharon Schmickle
July 14, 2008

Is something wrong with the economy, or is it just our imagination at work?
By Steve Berg
July 11, 2008

What to make of the recession question
By Steve Berg
November 9, 2007

Washington Post: Transcript of “Bush Remarks on the Economy”
July 15, 2008